How to kill time in Delhi before it kills you

For starters, every wealthy and regretfully worthless citizen of Delhi will identify with Charlie Seth, the decadent and bemused protagonist of Ravi Shankar Etteth’s new novel Killing Time In Delhi.

Other demi- and semi-creatures stalking through the narrative of the novel betray Etteth’s visceral urge to feed the reader, engaging entrails of Delhi’s chalk heads and compulsive copulators. All of whom, if you live in the capital, look like your neighbours or those you wish were your neighbours, depending on which fold of your wallet you woke up from. Once a city of gentle people... now, people mingle and get murdered in Ravi Shankar's Delhi. (Photo: Reuters)

There are godmen and godless women. There are double-living, dodgy servants and chiffon stalkers willing to trade bed and breakfast for a Hublot — or even worse, for the prospect of one. There are drug dealers whose numbers presently outnumber their clients in Delhi.

Charlie’s mistress overdoses and dies in his bedroom.

“The mistakes mistresses often end up making is to believe that men are in love with them,” he rues. “I took out my cell phone and called her to tell her to clean out her things. She didn’t answer. I had forgotten amidst this chaos that she’d cleaned out herself”. Classic litt. Etteth’s dark odyssey of irreverent debauchery flits between the nether worlds of inner Delhi — Lutyens — and the outer Delhi of gross farmhouses, whose inhabitants circle the city like vampires in search of wannabes. Characters overdose and die. Or fly. They mingle and get murdered. They sell hope to incurably tumescent ghouls who are unable to distinguish plastic surgery from angioplasty. And they cunningly use the law as in the classic parody of the ubiquitous cop Nik Sharma, aka Inspector Harrods, seen in every Delhi party, exuding sanctimony while seeking sin.

Killing time in Delhi is the scratched plastic mirror reflecting Etteth’s concern about the city’s decline from decency to delusion, far removed from “the days when nobody killed Prime Ministers, and there was no need for agents in black shades and bulletproof limousines”.

And yet, through the muck and the raking of India’s Gotham, Charlie Seth pursues the truth of love, the relevance of roots and the fruits of retribution. According to him, “Everything has a point, though we don’t always know that in the beginning.” Once majestic. Now, a city declining from decency to delusion? (Photo: Reuters)

It is clear that Etteth got wicked pleasure out of writing this novel — one can almost sense his literary chuckle and delightful drool rippling through the pages. His potshot at Delhi is a fun read. It is also a disturbing read about the slow corrosion of Delhi’s DNA. Once a city of gentle people, now a city of bipolar crooks.

When I first knew the author in the eighties, he was the country’s most emblematic cartoonist, working for the Indian Express. He could sketch three effortless lines and turn it into a parable of the times. His literary evolution took him to jobs as creative director of the Observer Group, the India Today Group and the New Indian Express. In 1996, when his first collection of short fiction The Scream of The Dragonflies was published, it carried a glimpse of his volcanic desire to tell stories that were so real that any reader, while reading it, could believe that he was a part of the narrative and a player in the cast. 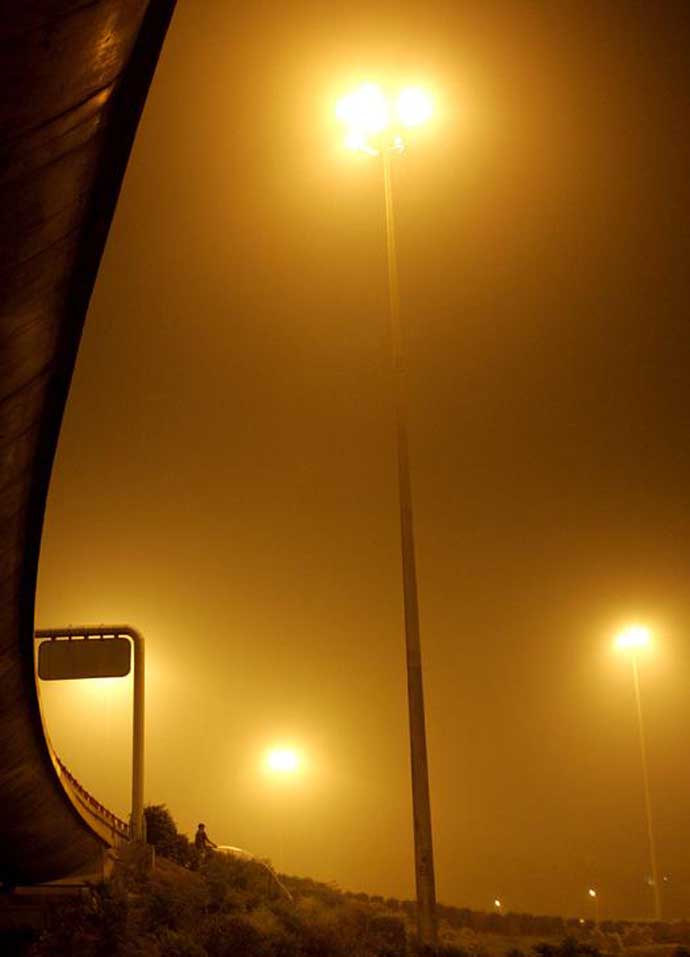 The haze over India's very own Gotham City. (Photo: Reuters)

His earlier novel The Brahmin was an incredible masterpiece of history and the pursuit of conquest and power. A sequel is in the writing.

Meanwhile, spring is in the air in Delhi. A bespoke election is in the offing. Pollen is intoxicating and asthmatic.

Go to a party — preferably to someone’s farmhouse, which looks like a cross between Antilla and a hovel. Throw shade while putting on your shades. Kill time in Delhi. Before Delhi kills you.