Only some relationships need space, but all bookshelves do. Thus, overcome by a fit of misguided enthusiasm last weekend, you decide to roll up your sleeves and get rid of however many books you can.

The reason for this assault on the north face of the shelves isn't a KonMari-esque desire to magically change your life, but a more prosaic realisation that teetering stacks pose a threat not just to life and limb, but also to the acquisition of new books. You think, fleetingly, of poor Lionel Bast from EM Forster's Howards End, who met his end by having a bookcase fall on him. Not a pretty picture.

Almost as soon as you begin, however, you realise why you'd been putting it off for ages. The books in front of you are stacked tightly and vertically, one row behind another - not because that's the best way to do it, but because you can cram more books into a shelf in that fashion. And it's a thankless endeavour to creep in this petty pace from row to row, stifling sneezes because of the dust that has crept in despite best efforts.

As for organising the books into some semblance of thematic order, you hastily decide to save that for another time. A time when you have significantly more hours and mental capacity to spare.

"My library is an archive of longings," Susan Sontag once wrote, about her personal collection of more than 20,000 books. With far fewer titles, you find yourself faced with the task of ascertaining which of your longings should no longer be part of your belongings. The bookshelves are mirrors that reflect your past; to winnow them is to remove those elements that no longer fit into the present version of yourself. 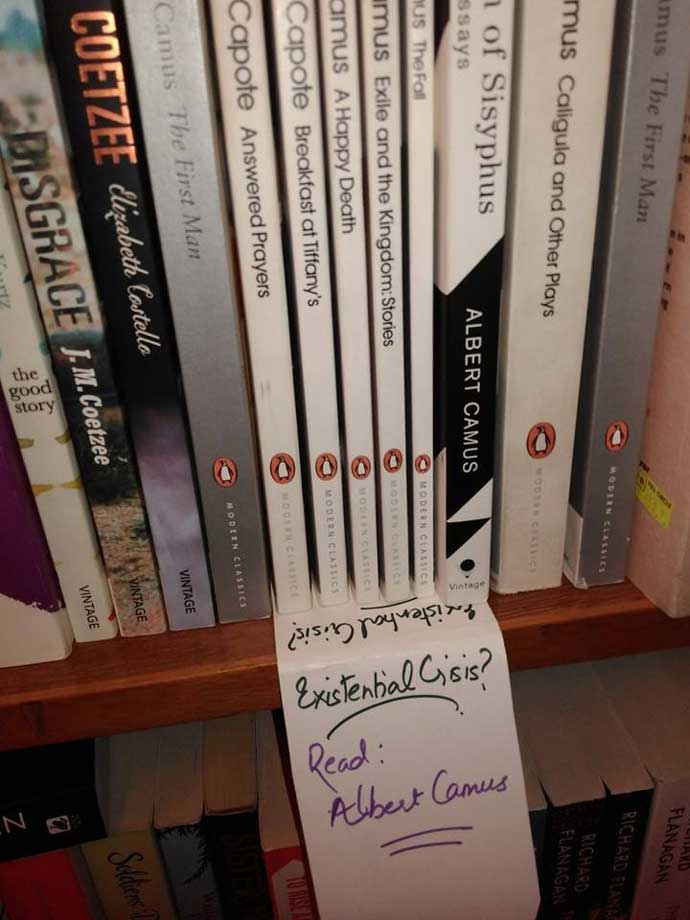 The books in front of you are stacked tightly and vertically, one row behind another - not because that's the best way to do it, but because you can cram more books into a shelf in that fashion. Photo: Charu Sankaran/DailyO.in

At this point, you cease your clean-up, being overcome by a desire to re-read Walter Benjamin's Unpacking My Library. You know you have a copy of his Illuminations somewhere on the shelves, but it's buried so deep that your excavations haven't unearthed it yet. So you reach out for the e-book reader and download it instead. (Which, as far as you're concerned, is one of the unassailable benefits of digital texts.)

In the essay, published in 1931 shortly after the German thinker had moved into a new apartment in Berlin, he writes, rather wonderfully, "What else is this collection but a disorder to which habit has accommodated itself to such an extent that it can appear as order?" He has much to say on the "thrill of collection", the means by which a book - or anything else, for that matter - becomes property, an acquisition, rather than a thing by itself.

"Ownership is the most intimate relationship that one can have to objects," he asserts. "Not that they come alive in him; it is he who lives in them."

Benjamin's essay makes you dispirited. Should you really, in his formulation, be discarding objects in which you live? Then you look around you, at the large heaps and the circumscribed spaces, and realise that you have no choice. Live and let go. In the words of Schopenhauer: 'Buying books would be a good thing if one could also buy the time to read them in: but as a rule the purchase of books is mistaken for the appropriation of their contents.'

As you continue the process of keeping and discarding, in a ratio that's heavily skewed towards the former, you're struck by the number of books you know you've read, but can't recall the contents of. That polemic on the rise of Asia? That history of economics? That East European thriller? Even the back jacket copy of these titles contains more than your memory does.

Of course, you uncover others that are simply unread. Those volumes of Proust. That anthology of science writing. That ecstatically-blurbed debut novel. You recall, grimly, the words of Schopenhauer: "Buying books would be a good thing if one could also buy the time to read them in: but as a rule the purchase of books is mistaken for the appropriation of their contents." Ja, mein Herr.

You're heartened, however, by an anecdote about Anatole France that Benjamin mentions in his essay. He writes of an inquisitive visitor, looking at the French writer's library and asking the inevitable question: "And you have read all these books, Monsieur France?" The withering reply: "Not one-tenth of them. I don't suppose you use your Sèvres china every day?"

Time passes and finally, tired and grimy, you gaze with some satisfaction at the pile you've decided to discard. (It's right next to the larger pile you've decided you have to read immediately.) Soon, you will discover Sod's law of bookshelves: no matter how many books you remove, the rest will expand to fill up the space available.