Bridgerton Season 2, finally, released on March 25 and made viewers all over the world fall in love with Kate Sharma and Anthony Bridgerton's slow-burn love story. But it seems like Indian viewers are not all that happy with how the Sharma family is represented; particularly with the languages the younger sister, Edwina Sharma, can speak.

Set in 1815 London, the Regency-era drama tracks the stories of the 8 Bridgerton siblings and their journey to finding their soulmates. The show is based on Julia Quinn's Bridgerton series, but creaters of the show have taken the liberty to stray a little from the books, multiple times.

One such change is the Sharma family. In the books, the Sharma family is actually known as the Sheffield family. Making the show inclusive was the reason why the creators decided to make such a drastic change to the storyline.

In an attempt to ensure that they accurately represent the Sharma family's Indian heritage, viewers see Kate tell Lady Danbury in Episode 1: Capital R Rake, that Edwina can speak both Marathi and Hindustani. 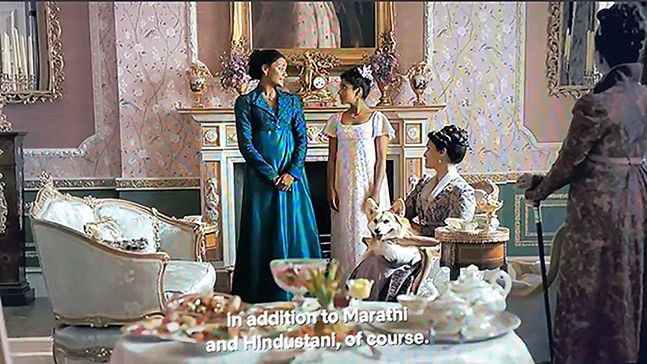 On hearing this particular dialogue, netizens exploded on Twitter and went on long rants about how 'Hindustani' is not a language, but an identity.

Here is what some of them said:

As far as I know there is no language 'Hindustani' or an instrument 'maruli'. There is Hindi & murali (flute) of course. I wonder if creators of @bridgerton shouldn't have at least done some research & checked the correct terms before introducing brown characters in #Bridgerton pic.twitter.com/XOBLD467lY

The “Sharma” sisters in Bridgerton are named Kate and Edwina, speak Hindustani and call their father appa. ?

Baaki sab toh theek hai but Bridgerton walo but ‘Hindustani’ is not a language it’s a nationality ? Hindi is the language

NOT ME TEARING UP WHEN THEY SAID EDWINA SPEAKS HINDUSTANI THATS MY DESI PRINCESS AND WE’RE ONLY ON EPISODE ONE #Bridgerton pic.twitter.com/BGIIDit5A3

so much for representation? bridgerton’s sharma sisters are fluent in “hindustani” which is a nationality and not a language. also speak marathi? but call their father “appa” which is tamil. and hail from mumbai. @bridgerton could’ve spent as less as 5 minutes to fact check… pic.twitter.com/KLfUiix03i

There is Sharma in Bridgerton. Am not sure if u want to continue ?And that Sharma mentioned she has learnt Hindustani ??‍♀️

Ah yes, the Sharma girls who were trained in 'Hindustani and Marathi', referred to their father as 'Appa' and elder sister 'Didi' and were from Bombay.Couldn't help but nitpick. Would have taken a 5 mins research to get these things right.#Bridgerton https://t.co/qXeXKMortA

I thought of that but then we're ignoring all the general racism and colonialism but we're keeping in that the English would interchangeably say Hindustani, Hindi and Urdu which is just... ? A weird hill to die on?

After reading Twitter's passionate emotions and thoughts about the dialogue, we decided to do a little research.

Now, hold your breath, Outraged Twitter: Hindustani is, or was, indeed a language. Pre-Independence (you know, the same era the show is actually based in), Hindustani was widely spoken in India, in multiple dialects.

Since the Sultanate times, Persian speakers came in large numbers to Northern India, and since Persian came to be the court language, the locals spoke in their own regional dialects.

The adoption of a common language between speakers of different languages is known as lingua franca. In this case, a mixture of Persian and local North Indian dialects became the lingua franca of the then Hindustan and came to be known as Hindustani.

Hindustani easily became the most naturally developed language in Northern India. Hindi and Urdu became the two streams of Hindustani spoken in the country.