Bryan Adams — one of rock's most talented balladeers with a friendly, world-weathered rasp — turns 61 today.

What happens when the cowriters of one of the most successful songs differ in its interpretation? What happens when all this while families have been singing along with it when it plays on the car radio? And it has played a lot, and still does!

The song in question is the Summer of ’69. Bryan Adams — the Canadian guitarist, singer, composer — co-wrote this song with Jim Vallance for his smash album Reckless. According to Jim Vallance, when Bryan and he were writing the song, it was originally called the “Best Days of My Life”. The words “Summer of ’69” only appeared once. At some point, they realised that “Summer of ’69” was a better title, so they introduced the phrase into a few more places in the song.

“Standin' on your mama's porch

You told me that it'd last forever

Oh, and when you held my hand

I knew that it was now or never

Those were the best days of my life

The song was really about the summer of 1969 — a simple and the most logical explanation!

But Bryan Adams disagrees. He says that the song is timeless because it is about making love in the summertime. ‘69’ has nothing to do with the year. To substantiate, he mentions the line in the last stanza, “Me and my baby in '69, oh.”

For good measure, he says that you would have to be pretty thick in the ears if you couldn’t get those lyrics. You are all adults, so I don’t need to explain what ‘69’ means, except to say that the Latin phrase ‘caveat emptor’ which translates to ‘let the buyer beware’ applies to the song lyrics too.

But the song is great. It was a commercial success worldwide. Bryan sang it during the 2011 Cricket World Cup Opening Ceremony in Bangladesh — effectively giving the song a Universal rating.

Bryan appears to have a special fondness for South Asia. He has played in Karachi, Kathmandu, Dhaka, Colombo, and several times in India – five times to be precise. His last visit to the country was in 2018. His concert in Delhi in 2011 was, however, cancelled by the police on security grounds citing parking, and law and order problems for the massive number of spectators expected. Cancellation of concerts is not new to the National Capital Region (NCR). In the same year, Metallica’s concert in Gurgaon was cancelled. In fact, it requires a brave organiser to host a music concert in NCR. With the demand for VIP passes from the officers of the national and local governments and the various departments, the crowd becomes unmanageable. The only solution (if there is one!) is to host niche bands whose following is limited (say a Jethro Tull who played with Anoushka Shankar in Pragati Maidan) or host it in a numbered-seat auditorium (say an Engelbert Humperdinck or Norah Jones in Siri Fort Auditorium) or host ageing rock dinosaurs (say a Santana in Greater Noida). If the organisers want to host mainstream popular pop/rock bands in NCR, then be warned. 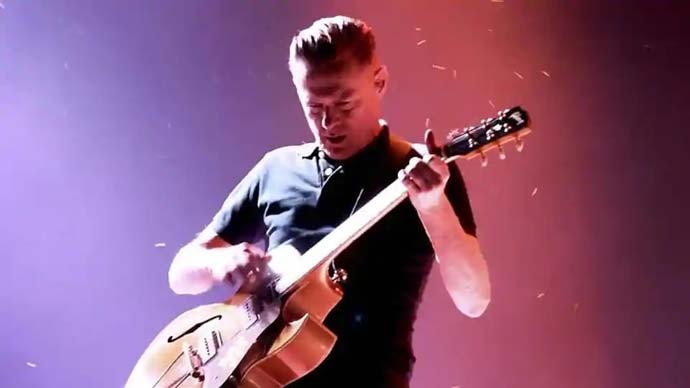 Bryan Adams has performed in India five times so far, with his last visit to the country being in 2018. (Photo: Associated Press)

Although his heyday was in the 1990s and 2000s, Bryan still enjoys immense popularity in India. How does one keep these acts fresh? The solution is to add a city – say, Ahmedabad – not in the usual rock/pop circuit, in 2018. This ensures that newer audiences get to see their music idols perform in their town.

What explains his popularity? The first tour in India in 1994 of a superstar of Bryan’s stature, at a time when he was ruling the charts, was a very big deal. It was a momentous, unprecedented, and exciting event. With international acts rarely gracing India with their presence, the guitar-slinging Canadian was like the first rain in generations on arid land. The ties that he consciously formed with the country from the time his career was at its peak — and not in his last days — is the reason why he is so loved in this country. His Summer of ’69, 18 Till I Die (about maintaining youthful traits, even as one grows older), (Everything I Do) I Do It For You, among other songs, are perennially ruling the airwaves. Bare Bones—Adams’s 2010 acoustic live album — did not make a dent anywhere but in India, where it was declared a hit.

Bryan taught himself to play the guitar. His father served in the Canadian army, was a UN peacekeeping observer, and served as a diplomat. At age 16, he dropped out of high school, ready to pursue a fulltime career as a musician, having already performed as lead vocalist for Canadian glam-rock band ‘Sweeney Todd’. Bryan was introduced to Jim Vallance, a Canadian musician, songwriter, and producer. Vallance recognised Bryan’s ability but also saw the need for further vocal training. With Vallance’s help, it was not long before Adams established a powerful, distinct sound, one compared to that of Rod Stewart and Paul Rodgers — a gravely raspy tone.

Bryan is a mournful romantic. He is among rock's most talented balladeers. He has a friendly, world-weathered rasp. His tunes are stately and a delicious hit of ear candy. Bryan’s songs were included in more than 100 film and television soundtracks, and he won a Grammy Award, an MTV Video Music Award, and an American Music Award for his hit (Everything I Do) I Do It for You (1991). The song featured on two albums simultaneously on its release: the soundtrack album from the 1991 film Robin Hood: Prince of Thieves and on Adams's sixth album — Waking Up the Neighbours (1991).

The song was an enormous chart success internationally making it Bryan's most successful song, and one of the best-selling singles of all time. The song has been covered by hundreds of singers and artists around the world.

I was fortunate to see Bryan in concert in Mumbai on May 6, 2001, at the NSE ground at Goregaon. The show was a smashing success. Thousands upon thousands of his fans turned up. The crowd went into a foot-stomping frenzy, as Bryan belted out hit after hit. Despite the incredible heat and sweat — many people fainted — the audience enjoyed themselves, matching Bryan bar for bar. He was fantastic on stage. Few people could carry an audience as he could. Everyone seemed to be enjoying themselves thoroughly, moving to the music and mouthing their way through every song. It is not easy to have a crowd this size literally dancing to your tunes. But dancing they were, as Bryan played to the galleries with the panache he is known for.

His smash hit song — (Everything I Do) I Do It For You — has the following lines:

"Look into my eyes, you will see

What you mean to me

And when you find me there

His formidable legion of fans would agree.

Also read: Happy birthday, Sting: Every song you make, we'll be listening to you

#Rock Music, #Canadian musician, #Summer of 69, #Bryanadams
The views and opinions expressed in this article are those of the authors and do not necessarily reflect the official policy or position of DailyO.in or the India Today Group. The writers are solely responsible for any claims arising out of the contents of this article.