Grant all other civil liberties to same-sex couples. Gay people are as boring and bourgeois as any other Indian heterosexual couple.

People will do what they want to do.

Some people will not like what other people do and yet people will do what they want to do. The problem arises only when one section of society decides, on everyone’s behalf, what the non-negotiable right thing to do is.

There’s a deeper problem when the government begins to represent this one section of society and endorsing its view as the ultimate truth.

Enter the courts and the idea of constitutional morality that supersedes majoritarian prejudice.

It’s a waste of time to expect political parties to officially support a decision like the scrapping of 377.

Perhaps it’s because the Indian people, whom they represent across the political spectrum, do not support it.

Even this, though, I’m not certain of. Just like any other Indian: They want to marry, raise a family, run for elections, be corporate slaves and evade taxes. (Photo: Reuters)

India is a deathly boring society, sedated and content in its bourgeois stupor.

Given our grand traditions of philosophy — Nyaya, Vaisheshika, Samkhya, Mimamsa, Vedanta, the Carvakas, the Ajivikas, Buddhism and Jainism, it’s surprising how unreflective a people we have come to be.

This means that even though we might be uncomfortable with the idea of homosexuality, it’s likely that our famed hypocrisy will also make us ‘adjust’ to it.

We don’t have strong life or death views about any existential subject.

The next day is more important than history or the future.

This is also one reason why Hindutva or Maoism or any other kind of ideology doesn’t seduce us in the long run.

In many ways, this can be an asset.

The logical next step would be to grant all other civil liberties to same-sex couples. Like marriage and property rights. Because, despite what some people think, gay people are as boring and bourgeois as any other Indian heterosexual couple.

They want to marry, raise a family, run for elections, be corporate slaves and evade taxes, just like any other Indian.

Let’s stop putting out clichéd pictures of transgenders on TV as representative pictures of the LGBTQ community.

A gay person looks the same as anybody else.

I was greatly tickled by debates on ‘liberal’ news channels where the anchors discussed ‘How to handle effeminate boys and tomboy-ish girls’.

All that this display of misguided empathy managed was to highlight how little we know of our own in our own families. 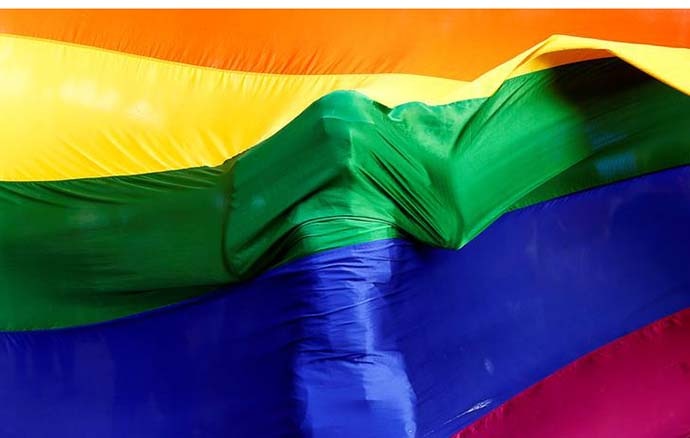 Can we stop putting out clichéd pictures of transgenders as representative pictures of the LGBTQ community. (Photo: Reuters)

Let’s also not speak of changing times and adapting to them.

Homosexuality has existed since there was life on this planet. And what times are we catching up with?

As Justice Nariman explained, Section 377 was based on Britain’s Buggery Act of 1533, brought in by King Henry VIII. But England itself decriminalised it more than fifty years ago. Twenty other countries, including France, Belgium, Argentina, Brazil and the Netherlands, had legalised it well before 1900. At present homosexuality is legal in 125 countries.

While the religious orthodoxy in India — Hindu, Christian, Muslim — protests, the truth is that the right wing across the world has co-opted homosexuality.

In France, Marie Le Pen expelled her own father from her party for his homophobia and antisemitism.

She packed her inner circle with out-of-the-closet gay advisers and party leaders.

Le Monde wrote: she is “trying to erase another image that has stuck to the skin of the FN — that of homophobia”.

A survey showed her share of the vote among married gay couples in the 2015 regional elections being over 32 per cent — up from just 19 per cent in a similar poll from 2012.

It was the assassinated Dutch far right leader Pim Fortun, gay himself, who was the first to start appropriating the symbols of the liberal-left, forging a new discourse of the right.

All this brings us to the San Francisco 49ers quarter back, Colin Kaepernick, and the Nike commercial.

As the SC judgment unfolded in India, over in America, Nike put out a controversial commercial featuring the NFL player who has raised hackles by refusing to stand for the national anthem during games. He had a reason: to fight injustice against his community. Black lives matter.

He has been dropped by all teams. And yet Nike chose to back and endorse Kaepernick with some splendid copywriting:

‘Believe in something. Even if it means sacrificing everything.’

Believe in something, even if it means sacrificing everything. #JustDoIt pic.twitter.com/SRWkMIDdaO

This was a divisive gamble.

The naysayers said Nike had made a big marketing blunder.

Well, the latest reports on CNN, CBS and CNBC say that Nike’s orders have seen a spike of 27 per cent since the launch of the campaign.

This is why I love capitalism. It can pull off the seemingly unimaginable. It has the power to legitimise.

In India, the ad business has capitalised on every conceivable issue: corruption, rape, sexual harassment.

And so, now that the SC has laid down the law, Indian advertising has its job cut out. I’m waiting for Nike’s first commercial featuring an Indian gay athlete.

Also read: SC verdict on Section 377 is a victory, but the battle isn't over yet

#Same sex marriage, #Gay sex, #Supreme Court, #Section 377 verdict
The views and opinions expressed in this article are those of the authors and do not necessarily reflect the official policy or position of DailyO.in or the India Today Group. The writers are solely responsible for any claims arising out of the contents of this article.