Carlos Santana: The man who made the guitar sing

One key to Santana's success is his unique way of reinterpreting the music of different cultures, from Latin to reggae and blues to bop.

What goes through the mind of a musician when his creation gets more popular when another artist covers his song? “I Shot The Sheriff” was written by Bob Marley and released in 1973 by Bob Marley and the Wailers. It was great. But Eric Clapton took it to a whole new level when he did the cover version in his 1974 release 461 Ocean Boulevard. Not only did it fare better in the charts, peaking at number one in the Billboard Hot Ten, but his version was also inducted in the Grammy Hall of Fame in 2003. The song is associated with Clapton in the minds of most music lovers. Most even do not know its antecedents. 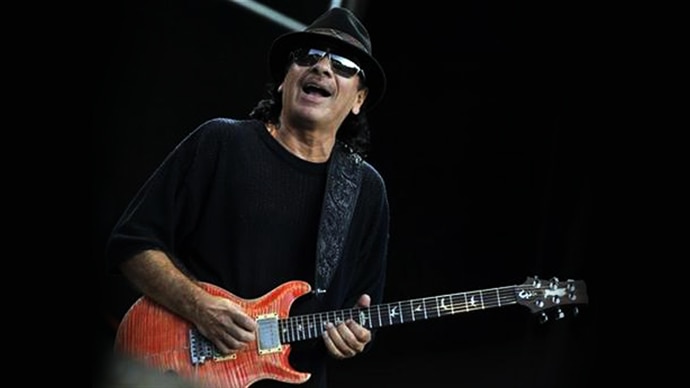 Take the case of “All Along The Watchtower”. It was written and recorded by Bob Dylan and appeared on his 1967 album John Wesley Harding. But it is identified with Jimi Hendrix whose interpretation was recorded for the album Electric Ladyland with the Jimi Hendrix Experience in 1968. It became a Top 20 single in 1968, received a Grammy Hall of Fame award in 2001, and was ranked 47th in Rolling Stone magazine's 500 Greatest Songs of All Time in 2004.

I could go on and on.

“Black Magic Woman” is a song written by British musician Peter Green, which first appeared as a Fleetwood Mac single in various countries in 1968. Scarcely would he or the band have known that the interpretation of the song by another band would catapult its popularity to an extent that very few songs manage to attain. The version, recorded in 1970, would become one of the band’s staples and one of their biggest hits, with the song reaching number four on the Billboard Hot Ten. The album Abraxas would reach number one on the charts and hit quadruple platinum in 1986, thanks to “Black Magic Woman”.

Today is Carlos Santana’s birthday. He has turned 73.

The sound of Carlos Santana is one of the world’s best-known musical sounds. His music combines rock, jazz, blues, and Afro-Cuban rhythms with a Latin sound. Carlos has been the visionary force behind an artistry that transcends musical genres and generational, cultural, and geographical boundaries.

There are some bands that regularly use musical instruments that are generally not heard in rock. Jethro Tull used the flute, Fairport Convention, the violin. Santana used percussion instruments such as timbales and congas – a novel sound that was integral to their distinctive signature.

Carlos was born on July 20, 1947 in the state of Jalisco, Mexico. His father, a violinist, taught him to play the violin, but the instrument eluded Carlos, who described his playing as that of a scroungy cat in an alley in the middle of the night. He picked up the guitar instead. He learned to make that instrument sing like Agustín Lara, the Mexican composer and bolero singer who was his father’s favorite. But Carlos could not resist the popular blues-guitar sounds coming from the US like BB King, Otis Rush and John Lee Hooker.

He moved to San Francisco and became a key part of a flourishing psychedelic-rock scene. His style — melodic guitar lines soaring over Afro-Latin beats in thrilling free-form jams - made the songs hits. He infused rock with a Latin feel rooted in Afro-Cuban rhythms that centered on Carlos’s extraordinary lead guitar playing, characterised by the distinctive sustaining of individual notes that became his trademark

In 1969 he forged ahead with some of the most innovative music to weather the fads and fashions endemic to rock 'n' roll.

That year, he , just 22 years old, had a career-igniting appearance at the Woodstock Festival. This appearance introduced them to an international audience resulting in their debut album Santana, recorded in early 1969, becoming a swift success, climbing its way to number four on Billboard’s album charts.

Like millions of the people who saw the fest and the film later, I was completely floored by their performance on stage. This was a new sound - energetic, electrifying. Carlos made his guitar sing. His fingers appeared to be an extension of his soul.

In 1972, Santana got interested in the pioneering fusion band Mahavishnu Orchestra and its guitarist, John McLaughlin. Their collaboration led to the spiritually influenced Love Devotion Surrender in 1973.

Santana was introduced to the teachings of the Indian guru Sri Chinmoy by John McLaughlin. Sri Chinmoy renamed his new protege ‘Devadip’. 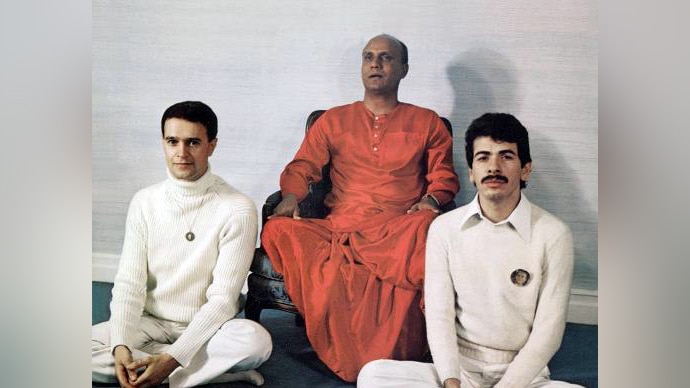 Carlos Santana said Sri Chinmoy remained vindictive for a while when he left. (Photo: Getty Images)

Santana eventually left the flock in the early 1980s after noticing certain cult-like aspects of the leader. The guru did not take Santana's decision well. Santana said Sri Chinmoy remained vindictive for a while when he left. He told all of Santana’s friends not to call him ever again because he was to drown in the dark sea of ignorance for leaving him. Over the next decades, however, the group’s output was more uneven — and less commercially successful. In the 1980s, like many artists of his generation, he made some uninspired records that tried to engage with the production values of the time. Santana kicked off the 1990s with a new album Spirits Dancing in the Flesh. Santana toured widely over the next few years but there were no further new album releases.

Having earlier shown an interest in spirituality, Santana became a born-again Christian in 1992. Meditation and mysticism became central to his life, and he began to see himself as a musical shaman whose pursuit of songs that offered hope and healing culminated in Supernatural in 1999. That was a star-studded comeback for Santana.

The album exceeded all expectations reaching the Number 1 spot in 11 countries. Santana wanted to reclaim a younger audience by stating that he was not into becoming a twilight-zone jukebox prisoner of the 1960s. It worked. The album endeared Santana to a new generation while still speaking to older fans.

Supernatural became an international smash, topping the charts throughout the world, and winning eight Grammy Awards, including Record of the Year and Album of the Year. The album went on to sell more than 30 million copies worldwide.

The single ‘Smooth,’ topped the US charts for 12 weeks, the first chart-topping song in Santana’s long-running career. On Billboard magazine’s rankings of the top songs of the first 50 years of the Billboard Hot 100 singles chart, ‘Smooth’ was ranked as the number two song overall and the number one rock song in the history of the chart.

Santana’s lasting contribution to music was marked by his group’s induction in 1998 into the Rock and Roll Hall of Fame. In 2013, he was named a Kennedy Center honoree.

His compositions and his guitar playing virtuosity bear his stamp and that is the ultimate achievement for an artist. His life philosophy is simple - only listen to the voice of your heart, the voice of your light. Another of Carlos’ mantras is to reinvent yourself every day. During a Santana concert, Carlos proposed to his girlfriend, Cindy Blackman, who had just finished a drum solo during the band’s set. The couple married in December 2010. She is his second wife. 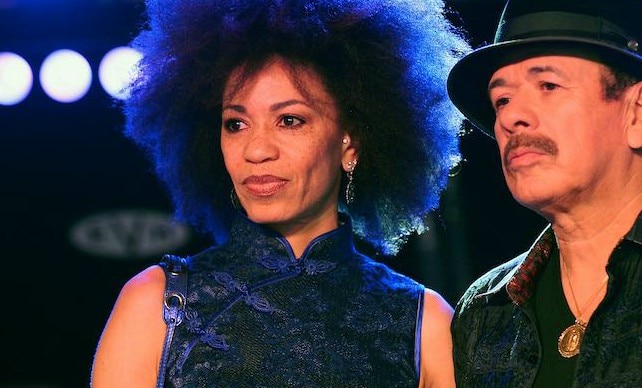 During a Santana concert, Carlos proposed to his girlfriend, Cindy Blackman, who had just finished a drum solo during the band’s set. (Photo: Getty Images)

One key to Santana's success is his unique way of reinterpreting the music of different cultures, from Latin to reggae and blues to bop. He understands the art of music by understanding the beat of the street. He feels that music needs melody, rhythm, and heartfelt sounds. He compares his music to water. Why? Because it has no colour. Despite his forays into the realm of world music, he concedes that the building blocks of his music remain jazz and blues with an emphasis on the latter.

Carlos Santana published his memoir, The Universal Tone: Bringing My Story to Light, in 2014.

In 2019, Carlos released his 25th studio album – Africa Speaks. In the album, he delves even deeper into his roots. He explores African rhythms—which he considers the origins of Latin music.

His ambitions have also moved beyond music. Through his Milagro (“Miracle”) Foundation, established in 1998, Carlos has given huge grants to hundreds of organisations around the world that support children in the areas of education, health, and the arts. Santana has leaped on several human rights bandwagons. In 1988, he performed at the Blues for El Salvador benefit that garnered for him a Grammy for Best Rock Instrumental Performance. He is involved in Native American rights groups.

I was very fortunate to have seen Santana live in October 2012 in Delhi. Carlos Santana brought the house down with his music and left fans asking for more. It was an evening that left music lovers spellbound! Addressing thousands of fans, Santana said: "Coming to India is like connecting to the light. We are very honoured to be here." 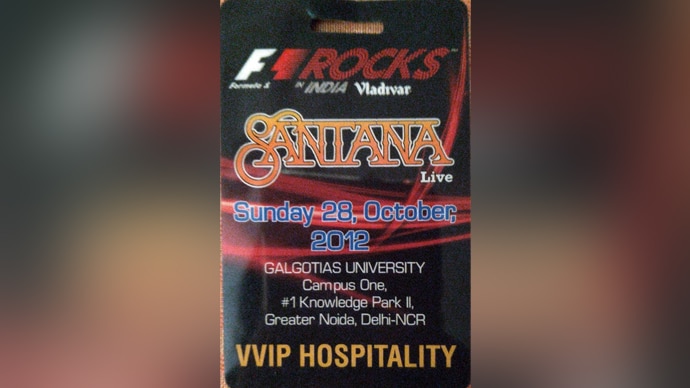 I was very fortunate to have seen Santana live in October 2012 in Delhi.

The musician's wife Cindy Blackman Santana took the drummer's seat and performed an energetic piece of music. It ended with the couple playing their instruments together, producing perfect symphony. The band closed the performance with the track ‘Make somebody happy’ – an appropriate song, because that’s precisely what Santana had done to the screaming fans.

Carlos summarises his journey – the trials and tribulations, career suicides, temporary loss of the creative touch, guilt, shame, pain, horror-whatever, as a masterpiece of joy. From Woodstock, an event he describes as a trampoline onto which he jumped up and has not descended yet, to date where he maintains that he is still fuelled by fierce inspirational fires, Santana regrets nothing.

He was to go on the Miraculous World Tour in 2020 to commemorate 50 years of the band and 20 years of Supernatural. But that has been shelved due to the pandemic. But be sure that Carlos is still active and going strong and will continue to captivate us all for many years to come. As a line in Black Magic Woman goes: "Don't turn your back on me baby, you just might pick up my magic sticks.”

We will not, Carlos.

#Black magic woman, #I shot the sheriff, #Bob Dylan, #Carlossantana
The views and opinions expressed in this article are those of the authors and do not necessarily reflect the official policy or position of DailyO.in or the India Today Group. The writers are solely responsible for any claims arising out of the contents of this article.