"The afternoon wind comes and goes between India and Brazil tirelessly." -Cecilia Meireles

Among the Latin American literary giants who wrote about India, the works of Octavio Paz and Pablo Neruda are well known, but not many are acquainted with Cecilia Meireles.

She also wrote several chronicles related to her trip to India.

"As far as Indian life is concerned, I confess it seems as familiar to me as if I had always lived here."

"For many reasons one can come to India. I come for Gandhi, the Mahatma." 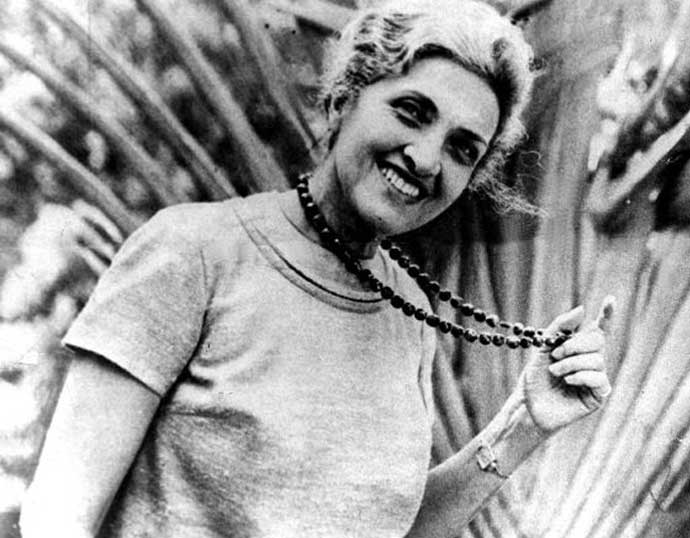 During her visit she was awarded a honorary doctorate by the Delhi University which was handed over to her by India's first president Rajendra Prasad.

She was the first Brazilian writer to spend considerable time travelling across India and produce a body of impressionistic poems about life in India. She considered India as her spiritual motherland.

The Brazilian Embassy in New Delhi published a bilingual edition of her 71 poems translated from Portuguese into English by professor Dilip Loundo and Rita Sanyal in 2003, to mark the 50th anniversary of Cecilia Meireles' historic trip to India.

Loundo was very kind to send me a copy of this book with a personal note last year. It became the main source of my discovery of Cecilia Meireles and I have generously used her quotes (here in this piece) from the introductory pieces written by prof Loundo.

One of the finest voices in Brazilian poetry and Portuguese language, Meireles set out to India on a spiritual enquiry, quest for self-realisation, poetic meditation and searching for the wisdom of life. In her "Song for the Peaceful India", she writes:

"Those who know you

are touched forever in their hearts

She had a long poetic partnership with India. The second poem of her first collection of poems "Espectros" is titled, "Brahmin".

"With a beard spilling over his chest, in the silent forest, the Brahmin dreams. In summer..."

The "Brief Elegy for Pandit Nehru" is one of her last poems she wrote before dying in 1964.

Much before travelling to India in 1953, she had imbibed Vedas, Upanishads, Puranas, Ramayana and Mahabharata, Panchatantra, works of Kalidasa, Kabir, Mirabai and Tulsidas among others.

She had a life-long fascination with the living spiritual tradition of India. She wrote:

"[In India] Poetry is not futile versification; it's an inner illumination, a sort of holiness and prophetism. The word of the poet is not a personal ability, a dilettante exercise. It's instead an example, a revelation, a teaching through sounds and rhythms... How fortunate am I to be able to breathe in a country [India] where one still thinks in those terms! What a hope in life! What a renewal of faith in humanity."

"When my love for India reached a peak, strange things happened to me. At night, in the middle of a dream, I seemed to detach myself from the body and move through unique places with colourful atmospheres, where certain figures slid through me... Light, fire, music , rhythm... It was ecstasy."

She candidly acknowledged her personal "debt towards India".

In an unpublished manuscript titled - "What we Owe to India" - she writes:

"We, Brazilians, are privileged inheritors of [things from] India."

Which she further elaborated in her speech at a seminar on Gandhi:

"The Indian vocation of Brazil is a kind of 'historical fate' when one remembers that (according to ancient texts) the discovery of Brazil was a mere accident on the route of the navigators bound for India."

In her chronicle, Kingdom of Hanuman, she noted:

"India is a country where wisdom is not only found in the sacred books but in daily life...”

At the age of 22, she dedicated a poem to Tagore titled, "Most Divine Poet".

Over the world, that I've never known, in your songs

If the words are of God or your own...

and I believe you're about to appear... My eyes are full of sadness...

The times are pitiless!

and all will know you're a living stuff, you're there, you exist!"

Her educational policies in Brazil borrowed much from experiments in Santiniketan. Her Portuguese translation of Tagore's Post Office was successfully staged in Rio in 1949.

Mahatma Gandhi had a significant influence on her life. She wrote two poems on the Mahatma, one following his assassination in 1948, titled, "Elegy on the Death of Gandhi", and another during her visit to India in 1953, when she saw him everywhere. In "Elegy", she wrote these memorable lines:

"The afternoon wind comes and goes between India and Brazil, tirelessly.

Above all, my brothers, non-violence.

But they are all carrying their smoking guns in the bottom of their pockets.

And you were, in fact, the only one without guns, without pockets, without lies

Unarmed up to the veins, free from the eve and the next day."

About Jawaharlal Nehru, she wrote to a friend: "Tomorrow I have a special lunch with Nehru (he looks very much like me, he has many teeth and he is very black like me... I believe we will become good friends)."

She is fascinated with the dark complexion which figures in many of her poems including this one:

they were all dark people

people who lived on faith,

people who died of sorrow."

She uses the Hindustani word "Bhai" very skillfully in her poem "Crowd":

"Where are those steps rushing to, Bhai?

In which place? For what reason?"

She also uses "Bhai" in her poems "Music" and "Colourful Drawing" as well.

In "Colourful Drawing", she says:

"Your eyes were black, Bhai,

She is moving and profound while she describes a poor man:

"He was not a sculpture

shaped in deep folds of dust.

Nobody gave him anything.

Didn't they see him? Couldn't they?

He was such an ancient man that he seemed immortal.

So poor that he seemed divine."

She writes about Patna, a place where I spent three years of my life:

But the pea flowers smelt with the violence of a bird that pours out its whole song."

She is very poignant in describing the wrinkled elephant:

"The wrinkled elephant has only an old yellow rug,

a torn and poor yellow rug,

quite different from the magnificent covers,

the brocades that once covered its forefathers, bearers of palanquins."

Look at these beautiful words in her Blind Man of Hyderabad:

"The city is like a coin of silver that passes from hand to hand.

The blind man's hand is in the boy's hand.

His beard belongs to the wind.

His eyes belong to the dream."

In her poem, Pomegranates she uses the word "mali":

"We shall not let the garden die of thirst.

Mali sprinkles the plants with a little water.

each pot receives five or six drops of water and also the love of Mali,

a dark and serious love in a white turban."

She longs to live in Hawa Mahal in her poem titled, "Jaipur":

"Many good-byes to Hawa Mahal (Wherein I should live!)."

There is no record of her visiting Kashmir, but she wrote a song for the embroiderers of Kashmir praising them:

"The gardens of the world

are not greater than your embroidery."

In her poem, "Women of Puri", she writes:

"Someone will remember your blue figures

among the temples and the sea.

Someone will remember your squatting body,

In her poem on Taj Mahal she is mystical:

"Between death and eternity lies love,

In "Nightfall", she is lyrical:

"The huts are like very ancient people, sitting, pondering.

A small song sounds at the end of the world.

A small moon delineates itself in the sky high above."

In her last poem in her poetry collection, Poems Written in India, titled - "Beach at the end of the World" - she asks:

"In this place of only sand

no longer land, not yet sea,

what shall we sing?"

And the poem ends on a positive yet poignant note:

in this impossible place,

neither land nor sea:

the beach at the end of the world

that will not retain our shadows nor our voices."

She wrote a number of poems at different stages of her poetic career.

In a poem on Kalidasa's Shakuntala, she wrote:

"And Shakuntala in silence

tied in her wet locks

if Shankuntala was all that,

as she dried her hair in the sun: ephemeral and endless maid?"

She sums up her spiritual journey in her poem, Unfortunately, the photographs are missing:

"But the photographs are missing

And that moment has vanished behind, in the path of time.

And those two shadows became more and more distant.

Realisation, that lasts, is pictureless."

In her poem, Cosmic Dance, she sees Nataraja and India dancing together:

and from North to South, India dances along with him."

She longs to go back to India again in a poem written in 1961, three years before her untimely death:

A legend exists that when she was on deathbed, three Indians were reported to be present there to give her last the words of exhortation before she died.

It is only fitting that Cha Com Letras, a monthly literary event organised by the Embassy of India in Brasilia, is paying homage to this great Brazilian poet who loved and was deeply inspired by India on the occasion of its 18th edition (to mark its one-and-a-half years of the programme in July 2017) with readings of her poems written in India by eminent Brazilian poets.

Also read: Only poetry is not shit: Jeet Thayil on writing