Learn to grow: Why children must read books on farmers

It’s important that these stories go beyond outdated nursery rhymes, especially for kids, who are naturally curious about where their food comes from.

When I was a child, my friends wanted to grow up to be teachers or doctors. For a long time, after reading Enid Blyton’s The Children of Cherry Tree Farm, I had my heart set on being a farmer. After all the four siblings in the book – Rory, Sheila, Benjy and Penny – led an idyllic life in a thatched farmhouse, feeding bottled milk to lambs and carting pails of creamy milk to the dairy to be turned into butter.

Many years later, when that childhood dream was a distant memory, agriculture saw a resurgence in the virtual world. FarmVille captured the attention of an entire generation who were suddenly hooked to the farming simulation game on Facebook. One friend was addicted to the extent that she would bully us into watering her virtual alpine roses every time she would travel. The Cherry Tree Farm is a story about four kids who are sent to live in the countryside.

Yet FarmVille is a far cry from the reality of farming. This year, unseasonal rain has hugely damaged crops across the country. “Earlier we knew that the monsoon would be here by mid-June and could plan our sowing then,” said Atram Anand Rao, a cotton farmer who owns ten acres of land in Telangana. “Now we never know, the rains could come in July.” Over the last 20 years, there have been 2,96,000 recorded farmer suicides in India, and about 70 per cent of these have occurred in cotton growing regions of the country. Cotton prices have declined by 20 per cent and few farmers have crop insurance. Mudpuddle Farm is full of charming stories about animals who live there.

Farmers are trapped in an endless cycle of debt and despair with climate adversity, high seed costs and exorbitant interest rates. No surprises there that India has 2,000 fewer farmers every day. Most don’t see a future in agriculture and hope their children will have better lives in the cities.

Cocooned in our urban bubble, few of us think about the people who grow our food, except to complain when the prices of onions become exorbitant. In schools, for instance, children continue to learn that “Old MacDonald had a farm” and all was hunky-dory there. The one nod we give to “indianising” it, is by changing the children’s song to “Lakshman Chacha had a farm, dhinak dhinak dhindha.” Unfortunately, Lakshman Chacha most probably lost his hens to a deadly disease and they didn’t “cheep cheep” happily because they were cooped up in a factory farm. 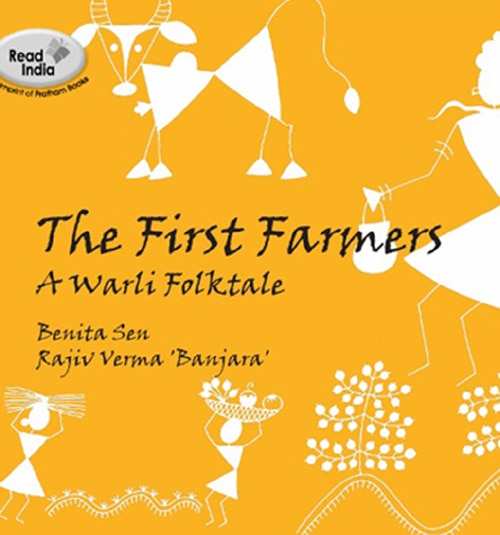 The First Farmers is a Warli folktale for young readers.

There are ways of sharing stories, real and fictional, about the people who grow our food and our clothes. Especially now, it’s critical that these stories go beyond outdated nursery rhymes, especially for children, who are naturally curious about where their food comes from. One such game is “3rdworldfarmer.com”, which I discovered while studying food security. This online game simulates farming in Africa, where the player has to tackle all sorts of problems – from market price fluctuation and corrupt officials to theft to losing all your chickens to disease. For instance, a player could lose an entire harvest to unpredictable weather and at another try, face a guerrilla raid. Smart players soon realise that inter-cropping means more money, which translates to access to crop insurance, medical care or educational facilities.

Apart from the Blyton books, there are plenty of classic and contemporary children’s books set in and around farms. There’s The Little House series by Laura Ingalls Wilder, How I Live Now by Meg Rosoff and Barbara Kingsolver’s Prodigal Summer, to begin with. Michael Morpurgo writes delightful books about nature and rural life. Mudpuddle Farm is full of charming stories about animals who live there while Farm Boy is a poignant read for young adults. And Morpurgo also has a Farms for City Children charity where he introduces children to farm life first hand.

Last year, when I asked Sedam Bheem Bai, a Fairtrade-certified farmer, if she would like to pass on a message to the people who wear her cotton, “We want them to be aware of the life we live.” Closer home, Pratham, Tulika and Tara have published picture books on farming, but mainly for younger audiences. The First Farmers is a Warli folktale which has been retold by Benita Sen and illustrated by Rajiv Verma ‘Banjara’ for Pratham Books. It retells the story of how the first farmers took on the task of greening a very brown earth. You can read the book here. Then there’s Tara Books’ Do! By Ramesh and Rasika Hengai, Shantaram and Kusum Dhadpe and Gita Wolf, which is a pictorial rendition of tribal community life for young children. Unfortunately, few books for young adults tackle the subject in India.

Maybe if we bring their stories to the forefront, children will dream of becoming farmers once again.

#Literature, #Farming, #Children's Books
The views and opinions expressed in this article are those of the authors and do not necessarily reflect the official policy or position of DailyO.in or the India Today Group. The writers are solely responsible for any claims arising out of the contents of this article.