The actor-filmmaker joins the Khan trinity who seem to get sports (and feminism) on celluloid right.

Bollywood's super Khans are like beasts who make a lot of splash no matter where they walk. After Shah Rukh Khan's Chake de India and Salman Khan's Sultan, it's Aamir Khan's second turn (don't forget his 2001 magnum opus Lagaan) to experiment with sports on celluloid, with a heady mixture of feminism thrown in.

With the release of the trailer of Aamir Khan's most awaited Dangal, it seems we are in for a real treat. Directed by Nitesh Tiwari, this wrestling biopic, based on the lives of Mahavir Phogat and his champion daughters - Geeta Phogat and Babita Kumari, is timed astonishingly well, given India is still in throes of Sakshi Malik bagging that Olympic bronze in 58kg freestyle wrestling in Rio 2016.

Breaking stereotypes at a time when cultural policing has reached its peak is something Bollywood is learning to do haltingly, one interesting concoction at a time. So the Phogat sisters - who hail from the Jat heartland of Haryana, where female foeticide remains a major concern and the chief minister issues diktats from time to time that women cannot wear jeans, or must dress modestly to avoid sexual assault - become icons in their own right.

That they also went on to bring laurels for the country - with Geeta bagging the first gold medal in freestyle 55kg wrestling at the Commonwealth Games in 2010, and Babita clinching it in 2014, and also qualifying for the Olympics, and giving Sakshi Malik not just good company but also solid competition - is something that we can all take collective pride in.

If Dangal trailer is anything to go by, that arduous journey, from being boisterous girls who are just too strong to be suitably "feminine", who beat up boys without as much as suffering a scratch themselves, who begin as foetal disappointments because they were born female, to being sportswomen in their own right, female wrestlers defying the gender and cultural straitjackets of a place as gender-skewed as Haryana - seems to have been portrayed rather well.

The moments of epiphany and the moments of ecstasy - stitched into a lavish trailer with its sepia-tinted frames - showcase not only the transformation of the girls into fine sporting talents, but also their father and coach - Mahavir Singh, played by Aamir himself.

This age-realism among the three Khans now looks here to stay. 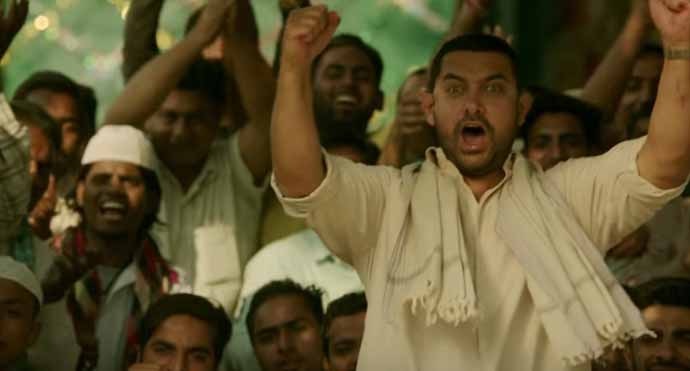 Age-realism has caught on with the Khans of Bollywood. Aamir plays father of four daughters and wrestler Mahavir Phogat in Dangal. [Photo: YouTube screengrab]

Moreover, where Salman Khan-starrer wrestling epic failed - the question of the female wrestler and the sacrifice that she voluntarily made for love - Dangal takes the argument forward and beats Sultan at its own game.

Indian sporting scene is at the cusp of something far bigger, far wider in scope than the cricket-centric universe we have been taught to live in for years. The PV Sindhus and Sakshi Maliks and Geeta/Babita Phogats and Sania Mirzas and Saina Nehwals and Deepa Karmakars are here to really pull us out of the sociopolitical lethargy that still cannot appreciate a female sporting talent, unless it's sexed up accordingly to satisfy the male gaze.

Dangal has some stunning visuals as evident in the just released trailer. [Photo: YouTube screengrab]

The bodies of these female wrestlers are so lusciously androgynous that they make us question the very ideals of male and female extremes. The new fitness culture and the explosion of physical training centres and gyms nevertheless do not adequately address the pervasive body-shaming that goes on in the outside world, particularly within Bollywood.

Dangal, which will release in December this year, looks to break many of those hardened notions about the female form and the big, bad, burly world of contact sports.

Aamir Khan, who has been making interesting cinema which have infused Bollywood's inherent colourfulness with taut, experimental and context-heavy storytelling, surely scores another big one for his latest. Thumbs up for the trailer, and certainly looking forward to watching the film once it hits the theatres.

Also read: How wrestling flourished in medieval India under Mughal and Hindu rulers

Watch: Deepika Padukone: I'm not pregnant, not getting married any time soon

#Geeta Phogat, #Wrestling, #Aamir Khan, #Dangal
The views and opinions expressed in this article are those of the authors and do not necessarily reflect the official policy or position of DailyO.in or the India Today Group. The writers are solely responsible for any claims arising out of the contents of this article.