Delhi's Marwari library is a treasure trove free from politics

It has managed to preserve archives that offer a multitude of histories.

Recently, considerable interest has been generated in public discourse with regard to reading in public libraries. The recent resignation of the Director, Nehru Memorial Museum and Library sprouted a series of recriminations and explanations with respect to his appointment. To Delhi, that was unusual, but very welcome. The politics of culture wars had landed onto the steps of the library. Most recently, the Pinjra Tod campaign at Delhi University asked students to gather with books and blankets for a night out quite literally in front of the Central Library, Arts Faculty. The idea here, again, is to reclaim the library, especially for women.

Since it is increasingly being noted that apart from being institutions of learning, libraries do have political lives, it does make one wonder about the other libraries of Delhi. Although not being typically cited, the Marwari library, that celebrated its centennial anniversary on the November 1, deserves to be etched on to the plot. Established in 1915 by Kedarnath Goenka, the library, visited early on by leaders like Madan Mohan Malaviya and Bal Gangadhar Tilak, occasionally served as Congress meeting grounds. Gandhi paid his respects within two years of the opening.

Resting atop the Haldiram's in Chandni Chowk, the library also proudly displays literary connections on its welcome board, with Harivansh Rai Bachchan visiting in 1957 and Agyeya following in 1965. 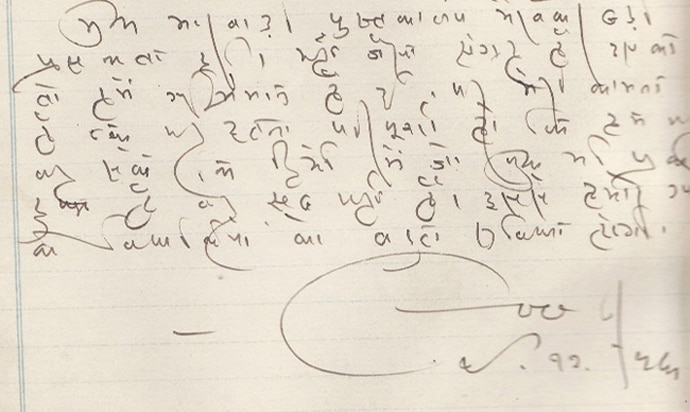 Even as the library currently mostly serves as a resting-cum-newspaper reading space in the outer room, with a large population of students cramming for competitive exams in the inner room, historically, the library was a space established initially for the care of the Marwari.

Akshaya Mukul's book Gita Press and the Making of Hindu India is a recent and excellent example reminding one of the Marwari quest for refashioning its identity in the early twentieth century, which lead to the birth of Gita Press in 1923, which went on to become the leading producer of Gitas, selling as many as 71.9 million copies (Mukul's figure, as of February 2014).

In this imagination, which actually emerged from one of the discussions at the 1923 All India Marwari Aggarwal Mahasabha, Gita Press was founded by Jaydayal Goyandka, leading, eventually, in 1926, to Kalyan, "the first-of-its-kind religious monthly with a single-minded focus on spreading sanatan dharma as the sole saviour, not only of Marwaris but of Hindus in general" (13).

The Marwari Library was born at a similar time in similar circumstances, albeit by a different Goenka. In 1948, the library was brought under the Marwari Charitable trust, a newly formed trust which also added under its wing the Shri Marwari Anshdalaya and Marwari Primary School. The library became a gathering place for the Marwari intellectual, and currently boasts of possessing several rare manuscripts on the history of the Marwari.

However, the fact that this library is perhaps the only one in Delhi to have preserved leading Hindi magazines from the early 20th century onwards is a testament to its vision. While the Mahavir Jain Public Library right next to the Marwari library serves as an appendage to its dharamshala/mandir, selling off newspapers as raddi within two-three days, the Marwari library has managed to preserve literary magazines such as Saraswati, Chand, Pratap and, of course, Kalyan and its English imprint Kalyan Kalpatru. If the library has these literary and, for the lack of a better term, "Hindu" archives, archives of middle-brow magazines such as Sarita, Caravan and Reader's Digest too have been well-preserved from their first issues. Interestingly, the library's catalogue has been uploaded online, not what one can say for most libraries in the country, and, in addition to holding mundane books for current competitive exams, the library also possesses some unexpected treasures like state Census reports from 1900 onwards, including linguistic and land surveys.

Even as the Marwari library comes from a history of the need to assert Marwari belonging - which, by the early 20th century, got inextricably linked to the quest for Hindu upper caste belonging, it has managed to preserve archives that offer a multitude of histories. The Centennial function held at Siri Fort on the November 1 saw a congregation of leading Marwari industrialists and families, with a play that featured Anupam Kher, currently not the most favoured man in town, hinting towards the organisers' leanings. However, the Centennial function needs to read against the archives that are preserved at the library.

At a time when libraries have become increasingly politicised, it is refreshing to see that even as the paraphernalia around the Marwari library points to one political spectrum, the library itself holds on to the principles of what a library ought to be.

Post your comment
#Libraries, #Pinjra Tod, #Marwari library
The views and opinions expressed in this article are those of the authors and do not necessarily reflect the official policy or position of DailyO.in or the India Today Group. The writers are solely responsible for any claims arising out of the contents of this article.