[Book excerpt] Where the gods would come down to bathe.

Caught in the hypnotic orbs of our car's headlights, the lone barasingha pauses a while, turning its elegant head and long antlers towards us. Watchful, yet unafraid. Its healthy, dust brown coat shines in the light. A second or two before it moves on, gracefully stepping off the winding motor road and into the dark forest.

A half hour later, we reach Sari, a village on the Ukimath-Chopta road. Jeet switches off the ignition. It is exactly 5.00am, but as with all hilly regions, the cold, silent night still has its mantle over us. The path ahead is moon lit, and the Saptarshi or Ursa Major constellation shines overhead. Then, from afar, the fresh breeze brings with it a sweet tinkling of bells. Suraj Singh Negi's mules are on their way.

The pre-dawn three-km ride is along a steep, cobbled and narrow path sharply, at times almost vertically, winding up the mountain. The three mules - Jeet has sought permission to accompany us again - and their owners keep a steady pace, the sounds of their hoof beats and bells punctuated by monosyllabic instructions from the owners to turn a curve or keep close to the rock face.

The riders are lost in thought. 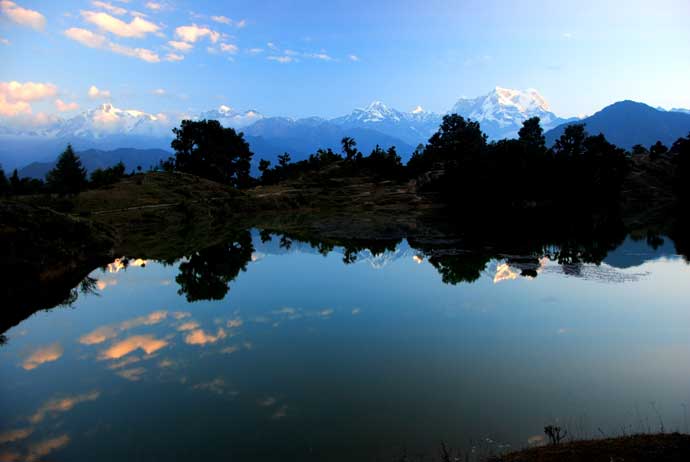 Sumita rides first. Each time her mule stumbles on loose shale, she has this vision of a free fall backward, her mule falling on Jeet's, Jeet and his mule landing on me and my animal, and throwing all of us off the cliff.

Jeet rides second. He relives his wedding day horse ride (no, he is not married to his girlfriend). A firecracker had burst near the horse's hooves, too close for the quadruped's comfort. Jeet was almost thrown off. That "almost" is suspect: I have only the groom's version. Jeet's mule, used to leading a convoy, is now trying its best to overtake Sumita's at an extremely narrow turn of the uphill track. He suddenly makes a thrust from the left, where, an inch from his hooves, the track has tumbled down into a dark chasm. "Arrey yaar, tera left indicator toh jala de," Jeet exclaims at this unexpected jolt, even as the mule handler snatches and tightens the rein.

Things are in control.

The lights of Sari and other neighbouring villages twinkle far below and to our left. Behind us, far away in the horizon the Chandrashila summit is starkly visible, a peak we conquered two days ago. The moonlight makes silhouettes of us all, hooded figures riding into an enchanting fairy tale. 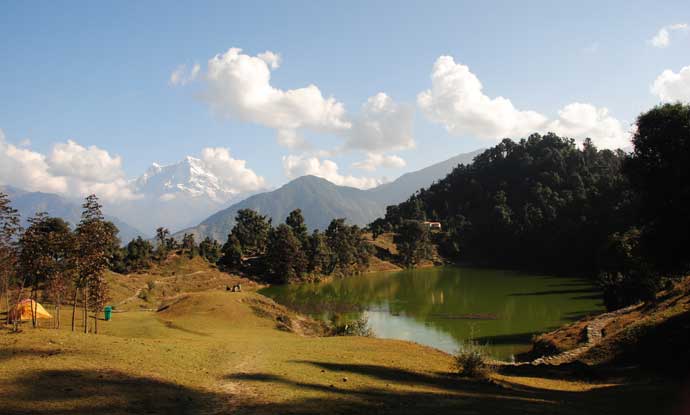 Deoria Taal in the shadow of the Chaukhamba peak. Photo: Sohini Sen

Around 8,000ft, just when the moonlight is fading and the sky turning lighter, the mountain top suddenly opens out to a tree-lined valley, and a huge freshwater lake comes into view. This is the Deoria or Devariya Taal where, according to local belief, devas or gods would come down to bathe.

We wait for dawn. At a shack some distance away from the lake, Jeet celebrates his survival with a double-egg omelette.

Deoria Taal, locals say, is the lake mentioned in the Aranya Parva (aranya: forest, parva: chapter) of The Mahabharata.

After their 12-year exile in the forest, the Pandavas were still undecided where to spend a year incognito. Around this time, a Brahmin came to them with a request: the sticks he used for igniting his sacrificial fire had got entangled in the antlers of a deer, and the deer had run away. Could the Pandavas help him retrieve the sticks?

The Pandavas went in search of that deer. In the forest, they felt very thirsty. Sahadev, the youngest Pandava, was sent to look for a lake, and he discovered one. But when he bent to drink from it, a crane standing by the lake told Sahadev that he would have to answer some questions before he could drink the water. Sahadev ignored the crane, began to drink from the lake, and died instantly.

One by one, Nakul, Arjun and Bheem followed the same path to the lake. They too ignored the crane's warnings and died. When Yudhishthir, the eldest Pandava, came to look for his brothers, he was stunned to see their bodies lining the lake.

The crane warned Yudhishthir not to drink from the lake without answering his questions. Unlike his brothers, Yudhishthir agreed to answer. The crane then took the form of a Yaksh, the spirit guarding the lake, and asked him profound questions. Yudhishthir answered them all without hesitation. 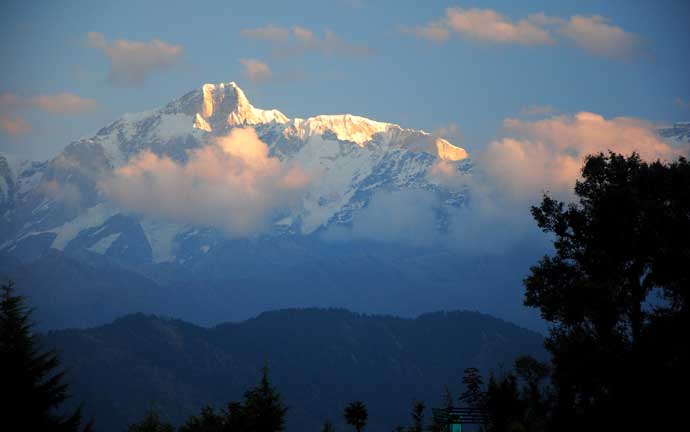 Satisfied, the Yaksh, who was in reality Yamadharma, the God of Death, and Yudhishthir's spiritual father, brought the four Pandavas back to life.

At dawn today, there are no cranes by the lake. Nor people. The tranquil waters hold the reflections of Chaukhamba, Kedarnath and other snow laden peaks of the Garhwal Himalayan Range. The long finger of a still invisible sun touches their tips hesitantly, making them blush, and the lake does an instant playback.

In slow motion, scant clouds over the peaks turn orange. The lake mirrors that too. And then, the still waters ripple with the sudden flip of a cormorant's wings, the surrounding meadows turn a golden yellow, and the lake, an emerald green.

Campers arrive with colourful tents and begin to set them up by the lake. The spell is broken, the allure remains. We return to Duggalbitta. Zanskar to Ziro: No Stilettos in the Himalayas; Sohini Sen; Niyogi Books

Some time before dawn the next day, Sumita and I hear the shuffle of stealthy feet outside our door. We are on instant alert, though reluctant to leave the warm blankets and investigate. There are some soft, scraping noises on the door for a while, but no one tries to open the lock. After a while the sounds stop. We fall asleep again.

Morning reveals a sheet of tissue paper slid under the door. Scrawled on it are a smiling face and the words "Happy Birthday".

I yank the door open. On its outer flank, chrysanthemums and marigolds stuck with cello tape surround another note, on another sheet of tissue paper. This has a sketch of three balloons, and the words "Happy Birthday 2 U FROM JEET."

I have two questions. The first, for Sumita. I know the answer, though.

"How did he know it was my birthday?"

The second question is for Jeet.

"Where did you get the flowers from?" I am afraid I know what is coming.

"From the resort garden, Ma'am," Jeet says with a cheeky grin.

An early checkout is in order.

(Excerpted with permission from the author, and publisher Niyogi Books.)

Post your comment
#Himalayas, #Deoria Taal
The views and opinions expressed in this article are those of the authors and do not necessarily reflect the official policy or position of DailyO.in or the India Today Group. The writers are solely responsible for any claims arising out of the contents of this article.

The author has enjoyed two successful careers as an Assistant Editor with The Telegraph newspaper and a Senior Manager with Tata Consultancy Services Ltd. Now a full-time travel writer and photographer, instead of chasing deadlines, she is chased by camera-shy yaks and was once ceremoniously kissed by a dolphin.