Lady with a gun: Kangana Ranaut’s Dhaakad teaser is bloody intense, quite literally

As she licks blood from her own face and then looks straight into the camera, Kangana in Dhaakad redefines 'menacing'.

As the world around appears on fire and the music booms into your ears, she appears almost as a silhouette with a gun — swaying from side to side, splashing water as she steps into the puddles spread around, even as the fire rages on.

When a dim light falls on her face, you know that’s Kangana Ranaut.

She lifts the machine gun she is carrying and fires, apparently into water. Bullets fall, creating ripples. Kangana’s face is clear now — and menacing, with blood splattered all over.

As the camera stays on her face, she takes out her tongue and licks the blood spread near her lips.

She looks triumphant, carrying the appearance of a conqueror.

As she looks up straight into the camera, the teaser is over, leaving you hungry for more. But you will have more only by Diwali 2020, when Dhaakad releases in cinema halls.

The trailer conveys the feeling that the movie is an action entertainer — one that is bloody intense, quite literally.

Reports suggest the makers met action directors from Hong Kong and Thailand for training Kangana in Gun Fu, which is a mix of martial arts and gun sequences.

Kangana first tried the action avataar in the 2017 release Rangoon which failed to impress people, given its loose script and unconvincing plot. She followed this up with Manikarnika (2019) in which she played warrior queen Rani Jhansi. The movie, again, fell somewhat short of expectations. 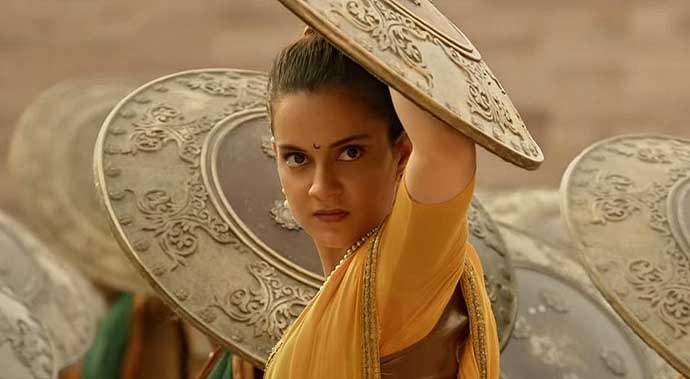 Kangana Ranaut in her action avtaars. (Photo: Stills from Rangoon and Manikarnika)

But Kangana is not one to give up. She has taken the risk of experimenting with the action genre and that says something about her guts.

You can differ with her politics but how do you deny that Kangana Ranaut is a pool of talent, bold in both taking challenges and doing the unthinkable in Bollywood?

Earlier, she had announced Dhaakad in style with a deadly poster that shows the actress from behind, holding machine guns in both hands, looking amazingly menacing.

With these efforts, the actor has single-handedly changed the perception that it takes a man to run a movie, no matter which genre you are experimenting with. Kangana Ranaut has done humour, psychological thrillers, romantic and action movies — all as the lady lead.

A ferocious-looking Kangana has already raised curiosity about Dhaakad now — even as the rest of the cast is to be announced.