Dhananjoy shows how the police, the judiciary and the State can err in sending a poor security guard to the gallows.

The debate on death penalty continues to rage. And why not? For more than 60 per cent of the global population lives in countries like India, China, Indonesia and the US where executions take place. And although the United Nations has time and again passed resolutions – albeit non-binding – urging the abolition of capital punishment, 56 nations still send people to the gallows. Yes, 103 have done away with this barbaric practice, and 30 are abolitionist in practice. It is in this context that Arindam Sil's heart-wrenching film, Dhananjoy, is of immense sociological consequence.

The Bengali film – which hit the screens on August 11 – could not have come at a more appropriate time, a time when the nation is witnessing a social turmoil and one political crisis after another, when life-and-death issues such as death sentence tend to be relegated to the back-burner. Sil's film opened on the eve of the 13th anniversary of Dhananjoy Chatterjee's hanging in Kolkata on August 14, 2004. The young man had aged parents, a brother and a wife, and in what seemed like a heartless action, the noose was placed around his neck on his birthday. He was 39. Sil's movie is bound to get the burning subject back into drawing-room conversations, and draw the attention of the people in the top echelons of political and judicial power.

Sil's movie is bound to get the burning subject back into drawing-room conversations, and draw the attention of the people in the top echelons of political and judicial power. Sil's work, Dhananjoy, will keep alive an issue as pertinent as capital punishment.

It is pertinent, and highly so, because as Sil shows in his fictionalised account how the police, the judiciary and the State could have erred in sending the poor security guard, Dhananjoy, to the gallows. Throughout his 14-year-incarceration (which by itself could have been a full sentence), he had said a million times that he was innocent of the crime he had been convicted of: the rape and murder of 18-year-old school-going Hetal Parekh, who lived with her parents and brother in one of south Kolkata's high-rise residential complexes.

There is another sentence that Dhananjoy kept uttering during his days in the prison. He was being punished for being poor, and he seemed to have used the same, famous words of an American Supreme Court judge, William Douglas, who quipped that “capital punishment was for those without capital”. And Dhananjoy had no money, and his lawyer in the face of a dwindling flow of fees lost interest in the case. Which is precisely what Sil says in his film, while throwing up a theory.

The movie narrates a fictionalised reopening of the case by two lawyers, who argue out in court that Dhananjoy might not have committed the heinous crime he had been executed for. It could have been Hetal's mother, who in a fit of anger after seeing blood stains on the girl's undergarment and presuming that she would have had sex, killed her. And the family went to elaborate lengths to cover up the murder, and Dhananjoy, who was a guard in the building, became the scapegoat. 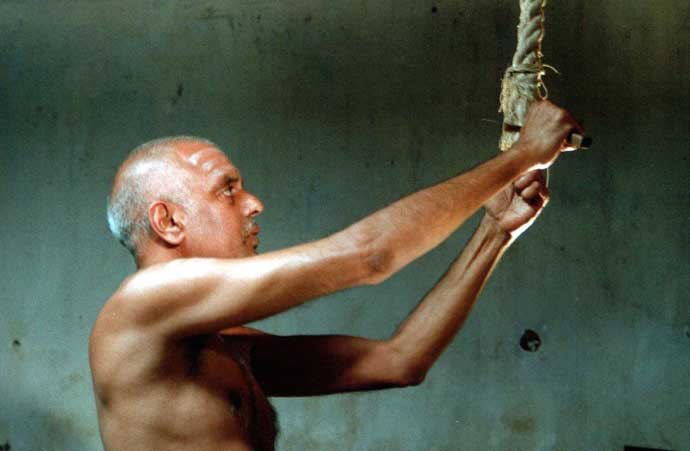 Throughout Adoor Gopalakrishnan's Nizhalkkuthu, the hangman keeps uttering that he might have executed the wrong person, an innocent man.

The film also follows a book, Adalat-Media-Samaj Ebong Dhananjoyer Fansi (Judiciary-Media-Society and Dhananjoy's Hanging), published in September 2016 that avers that the guard may have been wrong implicated in the rape and murder. The real villain may have escaped! It may have been Hetal's mother.

Sil's movie sticks to this line as well. Slickly mounted and neatly edited, Dhananjoy is paced like a thriller from a director who is known to have made some films in this genre.

Whatever be the merits or demerits of Sil's work, the fact is that Dhananjoy is a movie that needs to be watched, discussed and analysed. The man is dead and gone, but the family has been leading an impoverished existence in rural Bengal, ridden with guilt and accused by society of having spawned a man who raped and killed a young girl.

Sil's Dhananjoy assumes still greater significance in the lights of surveys conducted the world over.

A 1988 survey conducted for the United Nations concluded that there was absolutely no basis to show that death sentence had a greater deterrence than life imprisonment. Statistics from the countries which have abolished this penalty have since supported the finding.

Worse, as long as capital punishment exists, the risk of putting a noose around an innocent can never be eliminated. After all, no human system is infallible. In India, where no research has progressed in this aspect, such miscarriage of justice is quite likely, given the state of the judiciary and the complexities of the society. The legal system is not only bogged down by archaic laws, but also a terrible shortage of personnel.

And in a country ridden with caste, communal and religious disparities, and a far-from-perfect method of policing, the chances of wrongful (maybe even wilful) conviction may not be exactly rare. In the US, the death penalty has been often termed “racist”. India — where large sections of the one billion-plus population live in extreme poverty with absolutely no means of hiring talented lawyers to argue their cases — is probably a good example of what Douglas once said.

The celebrated auteur, Adoor Gopalakrishnan, shows this, all too clearly, through the guilt of a hangman in the erstwhile princely state of Travancore in his Nizhalkkuthu (Shadow Kill). Throughout the film, the hangman keeps uttering that he might have executed the wrong person, an innocent man.

Sil's Dhananjoy provokes us into thinking exactly this. Was the 39-year-old security guard not guilty? Was he framed? Maybe, the case can be reopened. Maybe, the debate on the death sentence can get a fresh dose of oxygen, and Sil's work has the potential to reawaken a society to the ills of having such a barbaric law on its statue.

Also read: Nirbhaya rapists to hang - What's there to celebrate?

Post your comment
#Death penalty, #Rape trials, #Dhananjoy
The views and opinions expressed in this article are those of the authors and do not necessarily reflect the official policy or position of DailyO.in or the India Today Group. The writers are solely responsible for any claims arising out of the contents of this article.