First, it was surprise and excitement over the cast and the political satire genre. Then came the nervous laughs, then some realisation. Finally, after a few more laughs came sobriety.

When the trailer of the movie Don’t Look Up dropped, I was excited and almost couldn’t believe that acting legends like Leonardo DiCaprio, Meryl Streep, Jonah Hill, Jennifer Lawrence, Ariana Grande, Cate Blanchett and everyone else was coming together on one screen for a COMEDY film.

I mean Leonardo DiCaprio plays an endearingly awkward scientist – who would have thought?

WHAT IS THE MOVIE ABOUT?

Don’t Look Up released in select theatres on December 10, 2021, and also dropped on Netflix on December 24, 2021. It follows two scientists (Dr Randall Mindy played by Leonardo DiCaprio and Kate Dibiasky played by Jennifer Lawrence) and their discovery of a Mount Everest-sized comet which is on the path to hit Earth, and create an extinction-level event.

It’s a disaster movie. And like all disaster movies, it begins with the government not listening to the scientists and ignoring the threats (of course).

But unlike the usual disaster movies like the Armegaddon, there's no jingoistic idealism of a heroic team saving humanity. Instead, Don't Look Up gives us an alternate ending. An ending netizens are now saying feels more realistic - like this is EXACTLY how everyone would react if humanity was on the brink on extinction.

although #DontLookUp is heavily satirical, i feel like if the world were actually ending, this is exactly how it would go, and that is both hilarious and terrifying

Even though Dr Mindy and Dibiasky scream at every available platform, at the top of their lungs, that ‘we are all going to die’, they don’t get to save humanity. Nobody does.

The Adam McKay-directed film depicts how humanity doesn’t come together to save Mother Earth. Instead greed, politics, misinformation and capitalism does humanity in.

SPOILERS AGAIN!! When Meryl Streep’s character President Orlean does order to blow up the extinction-bringing comet in Armageddon style, it is to boost her approval ratings. The action taken is not with humanity in mind, but with politics on the agenda.

The mission is just as soon called off – literally in the middle of the rockets reaching the edge of space – because a certain tech billionaire thinks it would be a waste to blow up the comet.

Billionaire tech genius Peter Isherwell wants the rare minerals on the comet. So with his influence, he decides to let the comet hit Earth in smaller pieces. Of course, the method is not peer-reviewed. I mean who cares about that, right?

THE PARALLELS WITH THE COVID PANDEMIC AND REALITY

The film barely feels like a parody. The film is talking about climate change and how the world continues to ignore the ramifications. Climate change movies are rarely made, and often thought to be boring. So, instead of climate change, Don’t Look Up gives us a dramatic comet – something a bit more immediate.

And terrifyingly, some of the scenes from the film have happened in reality. Just take a look at this TV news debate on climate change protests.

This could have been a scene in #DontLookUp The media is a major part of the problem but they are too self important to ever face it pic.twitter.com/c3DLqu6Zjr

But more so than climate change, Don’t Look Up seems to be playing out RIGHT NOW. The parallels with the Covid-19 pandemic are unbelievable.

The parallels between #DontLookUp and the pandemic are ?

Scientists discover a mystery virus. Politicians think it’s just flu, can be cured with some papad. Scientists keep warning about the deadliness of the virus, but international bodies like the WHO succumb to political pressure (hello, China and others), and fail to stop the spread.

When it spreads, governments again think it’s just some common cold. Debates and conspiracy theories about masks, virus and everything else break out. Some impose blanket lockdown with no thought of the repercussions.

Society as we know it breaks down. Well-off people manage to not leave their houses, majority of others die a pathetic death in their houses, without the basic access to medical care and livelihood.

And in a blink of an eye, it’s a full-blown pandemic. But politics - around the world - is more important. So, there are massive rallies. The elite don’t get hurt, but bodies of the common man flows down sacred rivers. Hmphhh… did I cover it all? Oh yes, then there are vaccines, so of course there are also anti-vaxxers.

Humanity was supposed to come together to stop the pandemic. Instead, all we got was an ignorant public; greedy, unsympathetic governments; and capitalistic businesses.

Here’s a fact; the script writing for Don't Look Up began way before the pandemic struck in 2020. By November 2019, it was announced that Paramount Films was distributing it.

WHO ARE THE CHARACTERS BASED ON?

But Streep and Hill’s characters are not limited to just one side of the politics or the right wing US party – the Republicans. It has hints of Hillary Clinton of the Democrats. So, in a way, the outcome of the movie would unfortunately have been the same, no matter who was elected – right or left.

Then there’s Peter Isherwell played by Mark Rylance. Well this megalomaniac can only be described as an unholy spawn between Mark Zuckerberg, Elon Musk, Bill Gates, Jeff Bezos, Tim Cook and the entire Silicon Valley rolled into one man.

Fun fact, the disturbingly soft-spoken character of Isherwell was also written to not make direct eye contact with other characters. Just some disturbing (and often celebrated) un-social quirks in some of the well-known tech giant personalities we all know about.

Mark Rylance in #DontLookUp is the best movie portrayal yet of what Silicon Valley has become: delusional, disturbed and destructive. Masterfully written and executed. https://t.co/LMwDaEdLCC

Then there are the likes of popstar Ariana Grande’s character Riley Bina – these are the celebrities who smoothly transition from an enthusiastic activist to a dismissive a-hole.

I don’t know if it’s worth an observation, but Leonardo DiCaprio, who’s known for his environmental activism, also parties with the likes of Jeff Bezos. Remember Jeff Bezos's girlfriend Lauren Sanchez and Leonardo DiCaprio memes on getting a little too close at a party? So, the activist celebrities and capitalistic billionaires definitely attend the same parties.

Not to miss out on the TV news shows and journalists – who either have an agenda, or only follow what the crowd wants.

Then there seemed like a funny throwback to the disaster movie – 2012 – which also recently dropped on Netflix (no coincidences there). There’s this scene in Don’t Look Up of a native Indian man waving from a mountain towards a burning forest, which seems reminiscent of the scene in 2012, where a Buddhist monk looks at the snow-capped Himalayas as doomsday nears. 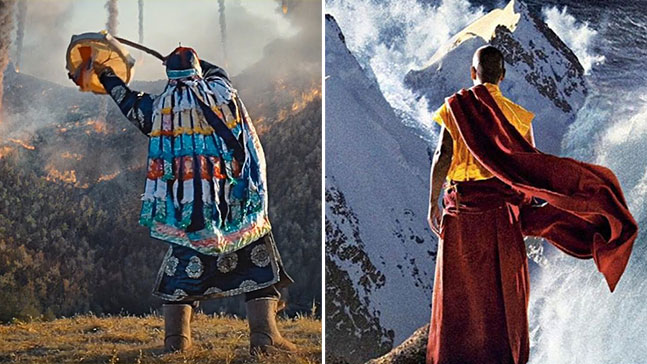 Well, it looks like Netflix wants us to watch all sorts of disaster movies, as we enter the third year of the pandemic. We are also feeling the same, Netflix. So if you are in mood for some more earth-ending movies like Don’t Look Up, you can go ahead and watch 2012.

Netizens also said they were reminded of 2006 film Idiocracy and Dr Strangelove while watching Don’t Look Up.

Don’t Look Up is directed by Adam McKay. McKay is known for his political films like the Big Short and Vice, both based on real events from the US. So, is Don't Look Up too from the same stable of real-meets-reel movies? It's a satire alright, but no satire is possible without reality, no?