Why Game of Thrones does a disservice to dragons

Who doesn’t love dragons? They’re like dinosaurs, only that they can fly and breathe fire. But what makes dragons even more special is that they seem so much more than fire-breathing reptiles — they have personalities; quirks both terrifying and fascinating. In various mythologies and fantasy series, dragons are known to bond themselves to people, understand various languages and are always regal, even if unknowable.

The Lord of the Rings had a dragon – the greedy but magnificent dragon Smaug – who called himself the "King Under the Mountain". The Harry Potter universe had several descriptions of not just dragons, but their sub-species. They were wild, untameable (but rideable) dragons. Eragon (The Inheritance Cycle) had a telepathic female dragon, Saphira, at the centre of the story. In the Narnia Universe, a greedy, selfish boy, Eustace Scrubb, becomes a dragon. Whether good or bad, literary dragons — first referenced in Eastern and European mythology — always had personality breathed into them, other than their flammable breath.

Which is why the Game of Thrones TV version is such a disappointment when it comes to dragons. Daenerys Targaryen calls herself the "Mother of Dragons", the "Dragon Queen" and the "Unburnt". All these are analogies derived from the fact that she helped petrified dragon eggs to hatch in a miraculous event.

This meant bringing extinct dragons back into the world, and also that she wouldn’t sustain serious burns if she played a game of fetch with her pets/ children — thus making her a suitable guardian for the tiny baby dragons. But Daenerys treats her adult dragons like glorified Rottweilers. Their use is only military.

Which is anti-climatic, because they could be so much more.

In the books, the Stark children are able to "warg" into (enter the minds of) their wolves. Perhaps for simplicity (some would also say dumbing-down), this aspect has been left aside in the series, with the exception of Brandon Stark. We are not sure what the dragons are in the books, as the TV series is ahead of the books at this point. But it’s clear till now that in the Time of the Dragons, the place of the dragons is as protectors of Daenerys and little else.

In fact, scratch that. Drogon, the big black dragon, named after the Khaleesi’s black-maned late husband Khal Drogo, is the protector. He saves his mother’s life many times, most recently at the Battle of the Goldroad and beyond the Wall. His other two siblings, Rhaegal and Viserion, are like the proverbial Nakul-Sahadev, never taking decisions, but are there to look good and be part of the general scenery. 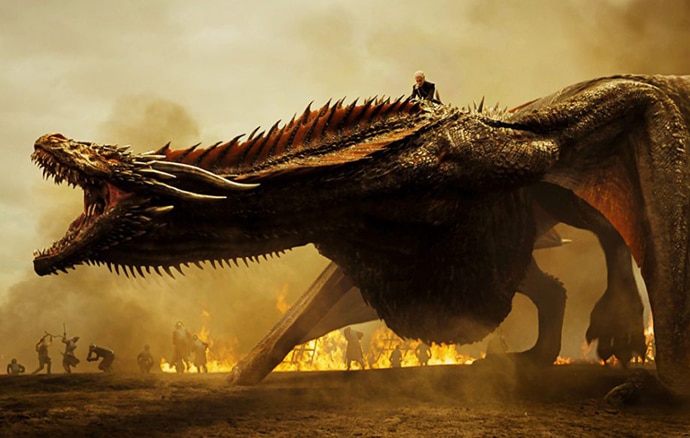 Fantasy has always been embellished and upheld by fantastic beasts. The Harry Potter series had unfriendly dragons, and a cold but approachable creature, a Hippogriff named Buckbeak. Harry approaches Buckbeak on the latter’s term — he is characterised as dangerous, picky, brooding, but ultimately accepting. So popular did the Beasts get that a full-fledged book and movie — on the Fantastic Beasts in the Potterverse — was later released.

The Lord of the Rings and The Hobbit had many memorable creatures — the oliphaunt, and most interestingly, a deadly old giant Spider, Shelob. Though Shelob, much like the dragon Smaug, wants to kill all our protagonists, both fire-breathing serpent and arachnid have character sketches drawn with empathy and care. Do you hate Shelob? No, decidedly not. You may even feel a bit sorry for her lonely, neurotic existence.

Smaug is characterised so well he could well be human. For one, he speaks. Not unintelligible snake-language. He speaks eloquent English, distinctly poetic in cadence and style: “My teeth are swords/ My claws are spears/.. My wings are hurricanes/ And my breath death!”.

He covets gold and power, and in that sense is no different from humans, giants and elves, - like King Boromir or even elf-Queen Galadriel who have felt a tug for the evil, magical ring at the heart of the series. The dragon is a dragon only in flesh — in spirit, he is as fallibly human as any of the other characters.

In Game of Thrones, it is not clear if the dragons are deliberately left without much character — is this part of mystery and plot twists, or is it just laziness? Tyrion — by far one of the most important characters and strategists in the series – says dragons are smarter than men. This is never built upon, though it is proved. The dragons Rhaegal and Viserion seem to prove this. They don’t harm Tyrion, even though they are chained in a dungeon, potentially hungry and infinitely pissed.

Daenerys refers to them as her beautiful children, but does nothing except use them as weapons. We have three glorified bulldogs whose true characteristics we never see, beyond them protecting their mother like dogs on steroids.

What do the dragons think of the power games? Do they covet power like Smaug did? Are they greedy or are they just dog-like? What about their biology – will they reproduce or stay the last dragons in the known world? Do they need bonded riders like the Eragon universe, or will they rebel and leave Daenarys as time progresses (and if her biological children are born)? If dragons are to be so important for victory in the Game of Thrones, I think it’s fair to ask for deeper characterisation, beyond them as just snappish weapons. 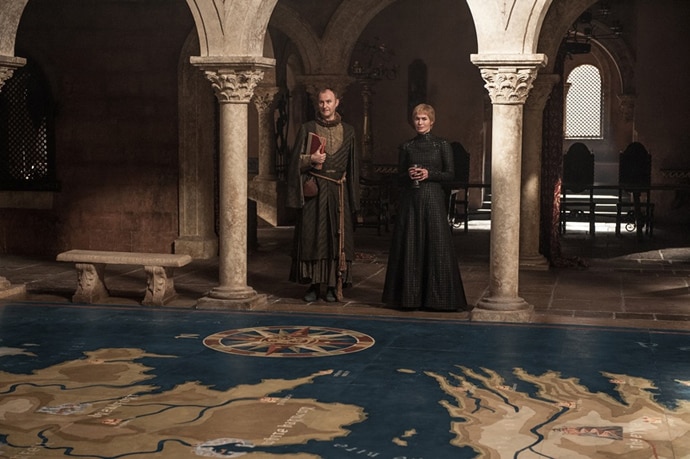 As characterisations go, I was much more interested in the other fantastic beast in the series — Arya’s direwolf Nymeria, who profoundly refused Arya’s offer of human habitation (and human politics). It’s also disappointing that Daenarys is such a feminist but didn’t name her dragons after women. This is unlike the Stark sisters Sansa and Arya, who were respectively half- and –full feminist at the time; they went on and named their wolves after women.

The fact that we don’t know the sex of the dragons; and Daenarys names them after the men of her life — both good (Khal and Rhaegon) and bad (Viserys) shows her interest in the dragons as weapons to further her power and legacy. Not exactly just children, then.

And now, there’s another dragon plot-twist. The Night King, who threw a deadly javelin in an attempt worthy of an Olympic Gold, has killed Viserion. Then, he resurrected this dragon we knew very little about; he is now an Ice dragon, breathing something that looks like frozen carbon dioxide.

The dragons have magic in their blood, other than just strength — though this wasn’t clearly evident earlier, this is now clear as Viserion breathes on and pulls down the enchanted Wall like it was no trouble at all. Will the ice dragon be as poker-faced and zombie like the other whitewalkers? Or worse still, will Rhaegon be characterised as zombie-like as the ice dragon, and will Drogon remain linearly doglike in his devotion?

I have one hope: even if the TV series dumbs it down for us, the books — The Song of Ice and Fire — should have far more time and song given to the breathers of Fire.