Finally, there's embargo on 'cute Taimur' photos: Why it's high time we gave Taimur his childhood back

Meanwhile, we should at least strive to get back our ethics.

First, let me give you the bad news. If you haven't heard it yet, then let me tell you that Saif Ali Khan and Kareena have requested the paparazzi to stay away from their porches as well as from their son Taimur Ali Khan Pataudi. There were no rules about not clicking Taimur earlier. (Photo: Instagram)

Do you know what that means? It's devastating news for a bunch of photographers and reporters who earn their daily bread by writing and clicking Taimur and selling that content to websites, who immediately put it up on their home pages.

Taimur, admit it or not, has spawned a mini ecosystem of news and social media content.

If you pass by Saif and Kareena's home at Khar West in Mumbai, you will always see a bunch of photographers permanently stationed there. Most of them work in eight-hour shifts, keeping a vigil on Taimur Ali Khan as he waltzes in and out of his house, holding the hands of his nanny, dressed in white uniform.

These photographers are not only guarding the perimeters of Taimur's house, they are omnipresent wherever Taimur goes daily. They are there at his playschool, at the playground even at the airport. Even Taimur Ali Khan, an adorable toddler, born on December 20, 2016, has started to understand that getting constantly clicked wherever he goes is normal.

That's where the trouble is.

Here's a viral video of him interacting with the photographers while getting clicked and actually waving at them before going into his house. In the video, he is seen to correct the photographers who are yelling out his name. Taimur requests the paps to call him 'Tim'.

This is so heartbreaking???????? We'll miss you baby❤???? Saif Ali Khan and Kareena Kapoor have decided that they don’t want Taimur to get habitual of receiving all the media attention. Saif has asked the photographers and media not to stand outside his residence to get the glimpse of Taimur as he wants his son to have a normal childhood away from all the limelight.

Here's a photo of Taimur crying. 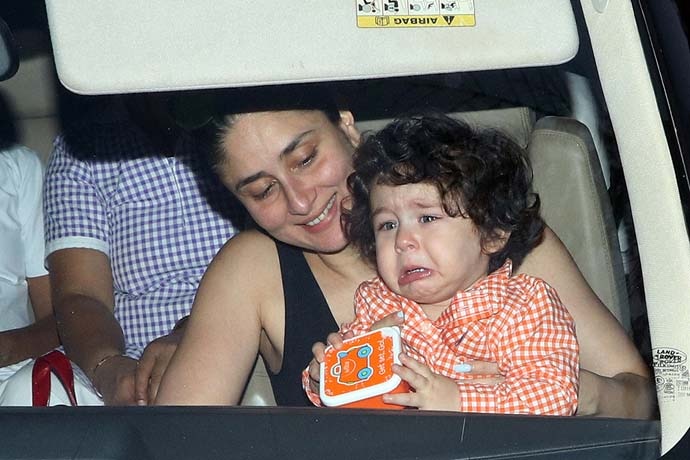 Yes, pictures showing him crying are also carried as "news" in some leading Bollywood websites along with a (sometimes bordering on the ridiculous) story about why he is crying.

Despite photographers constantly shadowing him, their parents have shown remarkable cooperation and have allowed photographers to click their son — this is one of the reasons why you have seen Taimur's photos flooding the internet constantly for the last 18 months, culminating in the emergence of what we now know as the 'Taimur beat' in Bollywood where reporters are assigned to exclusively cover him.

This trend has continued despite some voicing their concerns at the way we are dealing with his childhood. On the other hand, Saif's sister, Soha, was seen losing her cool recently when photographers wouldn't stop using flashes on the eyes of little Inaaya, the younger cousin sister than Taimur.

“Kitna aap log flash lagate ho. Aap log ke bacche jab honge to dekhna, main aake unke flash lagaugi (You use so much flash. When you have kids of your own, I’ll use flash on them too),” Soha snapped when photographers wouldn't listen to her pleas of not using the flashbulb.

Surely Soha was the first to realise that the constant clicks are having a physical impact on her little child — but the first hint that Taimur's parents were concerned about the psychological well-being of Taimur came up at the India Today Conclave 2018, when Kareena Kapoor-Khan openly voiced her concern about paps shadowing her son all the time. Kareena Kapoor Khan voiced her concern over the frenzy around Taimur at the India Today Conclave 2018. (Photo: India Today)

She said, "I do not like the fact that every day, Taimur's moves are being monitored and you know, pictures are being out, what he's doing, what he's wearing, discussing his hairstyle. I do not know how to put an end to it as the cameras just follow him around."

It seems that finally Taimur's parents do how to deal with it — they have imposed a complete ban on clicking Taimur Ali Khan and have requested the Bollywood paps to vacate the perimeters of their house. Obviously, the Whatsapp Groups of Mumbai photographers are on fire because this ban effectively means that they won't be able to sell "Taimur Content" to media houses at a premium. This will have a direct impact on the money that they earn every month by selling Taimur Content to media houses.

Forget about the physical harm of continuous exposure to the flashbulb in his eyes, we are slowly encasing the little one into an augmented reality.

Taimur Ali Khan has the right to lead a normal life like any other child — he doesn't require himself to be exposed to dozens of men constantly yelling out his name just because another few millions could go 'awww' over his pictures or videos on the internet.

There's no need to refer to an expert or a doctor here, even a medical student will tell you that the paparazzi might be doing irreparable damage to the little kid — it is indeed crucial that the parents act now.

Saif Ali Khan and Kareena Kapoor Khan are stepping in at the right moment.

I asked one of my acquaintances (who's close to the Khan family) to understand why Tim's parents (that's his pet name actually) are reacting now and apparently never reacted earlier.

"Actually for Taimur, the presence of paparazzi around his house didn't appear to register with him. He was too young. He never really cared or that is what we understood," they said.

"But now, things are different. He is comprehending that he is being photographed and even posing for the lenses. He has started to interact with the lensmen and accepting that it is an integral part of his life. We find him looking out for lensmen whenever he is travelling. Accept it or not, Taimur has turned into a bigger celebrity than both his parents. If nothing is done now, it might spin out of control," added the acquaintance.

But it will be an uphill task to impose the new restrictions on the mediapersons.

Some of the photographers are definitely not going to pay any heed to these requests. The Khans are well aware that there would be still some people holding cameras, hanging around their building to "spot" Taimur and get an exclusive shot or footage.

The trend of the incessant clicking of Taimur Ali Khan will only stop when media houses put a cap on the rabid usage of "Taimur content" and shut down the Taimur beat. That is why it is imperative that the entertainment editors react now, more than Taimur's parents even.

So, dear entertainment editors, please shut down the 'Taimur section'. It is the most ethical thing to do.

Let's understand that we have not done Taimur any good by buying his pictures and videos at a premium just for a few more clicks, because Taimur's pretty face forces your readers to notice your content.

You can argue that Taimur will still be photographed even if you don't buy his pictures. True. But if all the entertainment editors come together and decide to do ethical journalism, then the demand for Taimur content will fall drastically. Photographers will stop clicking him because it won't generate any money.

The motley group of paps who wouldn't be able to get over their obsessions can be contained by other means. It's time to control the flash mob. (Photo: Reuters)

At least, we will be able to give that kid a normal life and not make him believe that those people chasing him and calling out, "Taimur, Taimur," all the time is what a 'normal childhood' is all about.

In Hollywood, these ethics are firmly in place and most celebrities fiercely guard their children. In India, Kareena and Saif have just realised that they need to act too for the sake of their only child. They are absolutely right and they have denied you their consent to invade their son's privacy.

The concept of consent is still the same — just this time, it's from the parents of an innocent toddler who is too young to understand the frenzy around him.

Let's give back Taimur Ali Khan his childhood. And ourselves, our ethics.

Also Read: Will we still love Taimur, AbRam and Aradhya when they make their Bollywood debut?

#Bollywood, #Kareena Kapoor Khan, #Saif Ali Khan, #Taimur Ali Khan
The views and opinions expressed in this article are those of the authors and do not necessarily reflect the official policy or position of DailyO.in or the India Today Group. The writers are solely responsible for any claims arising out of the contents of this article.