One of the iconic images associated with Fatehpur Sikri is the Hiran Minar, which, in popular legend, is a tower embedded with elephant tusks.

According to one version, Akbar would sit atop the minar, watching from this vantage the elephant fights that took place below. According to another version, the emperor would watch polo matches being played at the Chaughangah (polo ground) stretching besides a lake.

At the present moment, this tower stands forlorn between the Hathipol (the Elephant Gate) and the dry bed of the lake, which had now turned into fields. 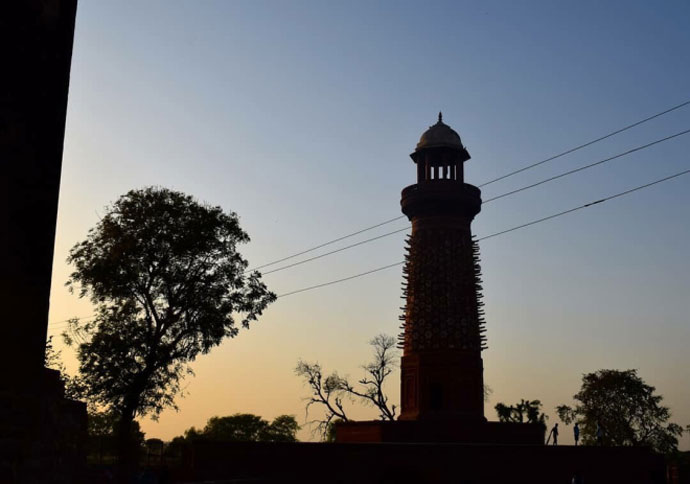 To understand this tower and its purpose, one would have to understand the layout of the city and its inspirations, the sources of urban design. One of the major sources of Mughal urban design was the mobile encampment that has not only been recorded by Akbar's historian Abu’l Fazl but also been described in a number of European travellers' accounts. The Mughals, and the Timurids before them, were peripatetic by nature: they would constantly be on the move and seldom stay for long at a spot.

For instance, Amir Timur, who created the magnificent palaces at Samarkand, whenever in the city, would never stay in the monuments he created, but live mostly in tents laid out in the gardens outside the city. At other times, he would be travelling with his entourage from one corner of his empire to another. The same practice was followed by Babur and his successors in India. The camp on the move was no small entourage but a whole city on the march: the emperor carried with him his nobles, bureaucrats and retainers. Each had their own men at service. Then there were those who came to meet the king or the nobles. All of the travellers had their daily needs: the tanner, the barber, the grain seller, the cloth merchant, the pan seller, the physician, the veterinarian, the fodder seller — the list was unending, resulting in great multitudes of people moving along with the emperor.

Some would be on foot, some on camels, others on horses. Some would move faster with the emperor, others would lag behind. And all had to be settled in the evening for the night. Each was assigned a place as per his status or rank. Each knew his place where to go when the emperor would stop for the night: the first tent enclosure was for the emperor. It would have two sections, the first a public space for him to give audience and another where he would himself stay.

Somewhere around would be tents for private meetings and war councils. Beyond his enclosure would be a large cordoned-off area for the women. Tents of princes would surround them. Then, all around would be a cordon of camps of high commanders, superintendents and other high bureaucrats. Beyond this layer would be the military commanders, security guards and Army men. Petty nobles would fix their tents in the next zone, followed by the tents of other followers and retainers.

The farthest would be the service classes. The merchants, along with their merchandise, would occupy all the corners so that every one could approach them easily. And this arrangement would remain till the emperor would decide to commence his journey again. Similar settings would then be there at the next site of camp.

To guide everyone to his rightful place and to ensure that the latecomers reached the camping site even after dark and then to know where they had to go to pitch their tent, a large bamboo pole with fire lit on its top would be fixed in front of the tents of imperial authority.

The fire lit on the top of the pole would be the beacon which showed them where the tent of the emperor was! This was known as the akash (sky) diya (lamp), virtually a lighthouse.

The akashdiya would guide the night traveller to the camp, as well as mark the exact location of the sovereign: the petitioners would know where they had to go!

Structures marking distances have been constructed in India since the ancient times. Greek ambassador Megasthenes, who travelled to India, mentions in his account that in the Mauryan period, there were milestones on roads to record distances, erected at regular predetermined spots. However, no reference to the structures of this nature is known from the Sultanate period. 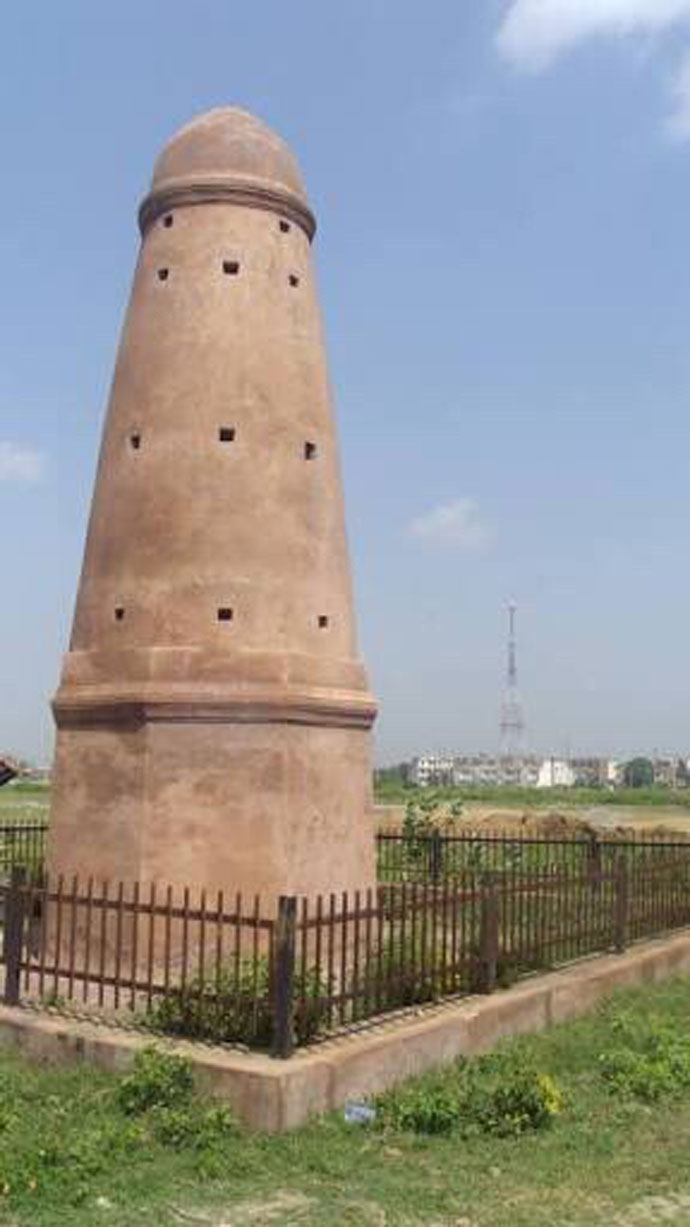 Babur, in 1528, ordered one of his Central Asian nobles, a certain Chiqmaq Beg, to measure the road between his new capital Agra and Kabul, with the assistance of the royal clerk. The emperor ordered that at every ninth kos, the noble should erect a 12-qaris (24ft or 36ft) high tower, topped with a superstructure having four openings.

These were the kos minars. As recorded upon surveys of some sets of these minars near Delhi, one kos measures about 4.17 kilometres.

This tradition was later followed by emperor Sher Shah Sur, who ordered such milestones to be built along the network of roads he laid out. Along these kos minars were his sarais and dak chaukis. This tradition was carried forward during the next reign. Akbar, it is recorded, built kos minars along the road from Agra to Ajmer. 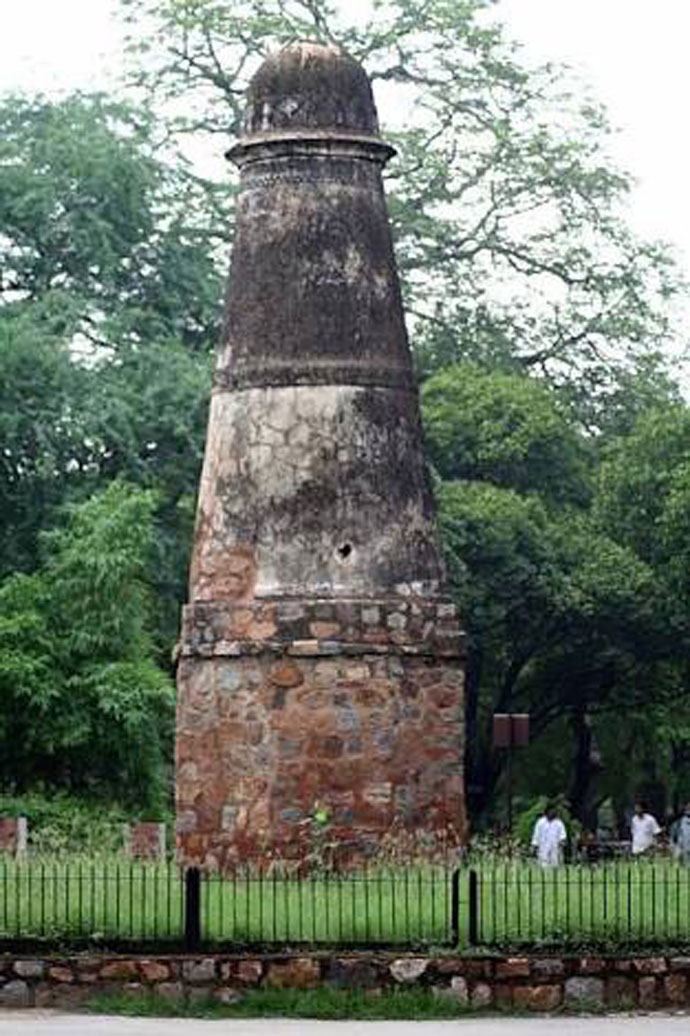 Later, in 1619, Jahangir ordered Baqir Khan, the faujdar of Multan, to erect kos minars from Agra to Lahore. A large number of these milestones are extant to date; most notably, 34 of these, in varying states of preservation, can be found in Punjab. 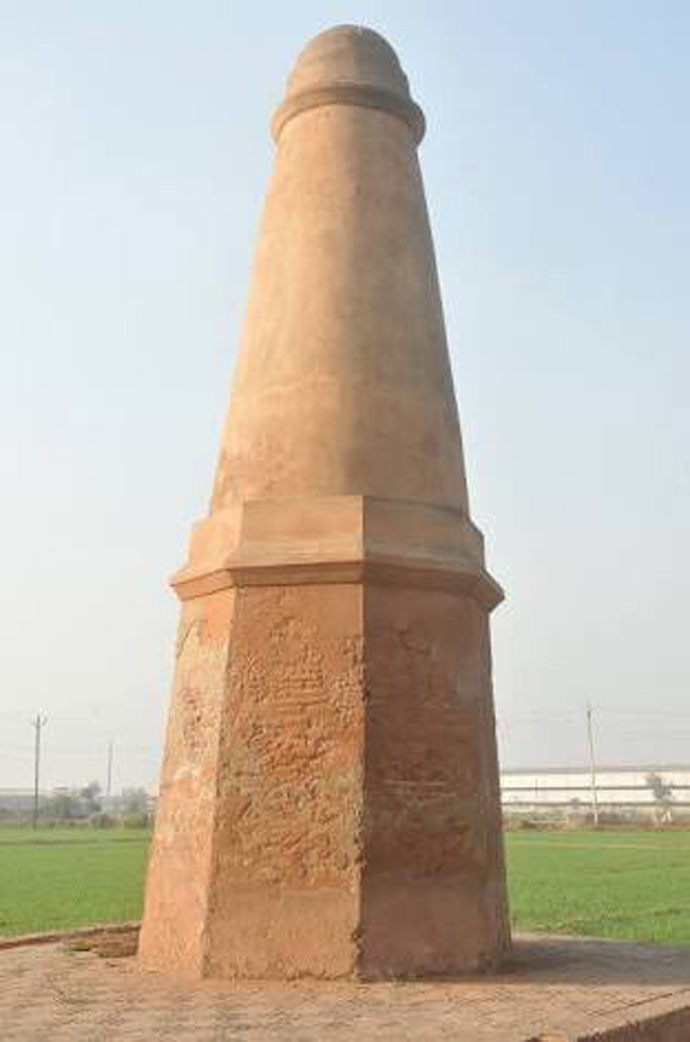 Although the surviving kos minars broadly follow the same design, some of them have graceful proportions whereas the others are somewhat clumsy.

A number of them have wedge-shaped stones studded on them: today, a few minars just bear the hole where these stones were fixed. They never had any transcription on their body. The Hiran Minar of Fatehpur Sikri is an akashdiya as well as the city's zero milestone.

It stands (as an akashdiya) just in front of the main entrance of the fort. A miniature from the manuscript of the Akbarnama preserved at Victoria and Albert Museum (“Akbar’s victorious return to Fatehpur Sikri”, outline by Kesav the Elder, painting Nar Singh, opaque watercolour and gold on paper, Mughal, ca. 1590-95, IS.2:110-1896) testifies that this indeed was the entrance gate to the palace beyond which the Hiran Minar can be seen! 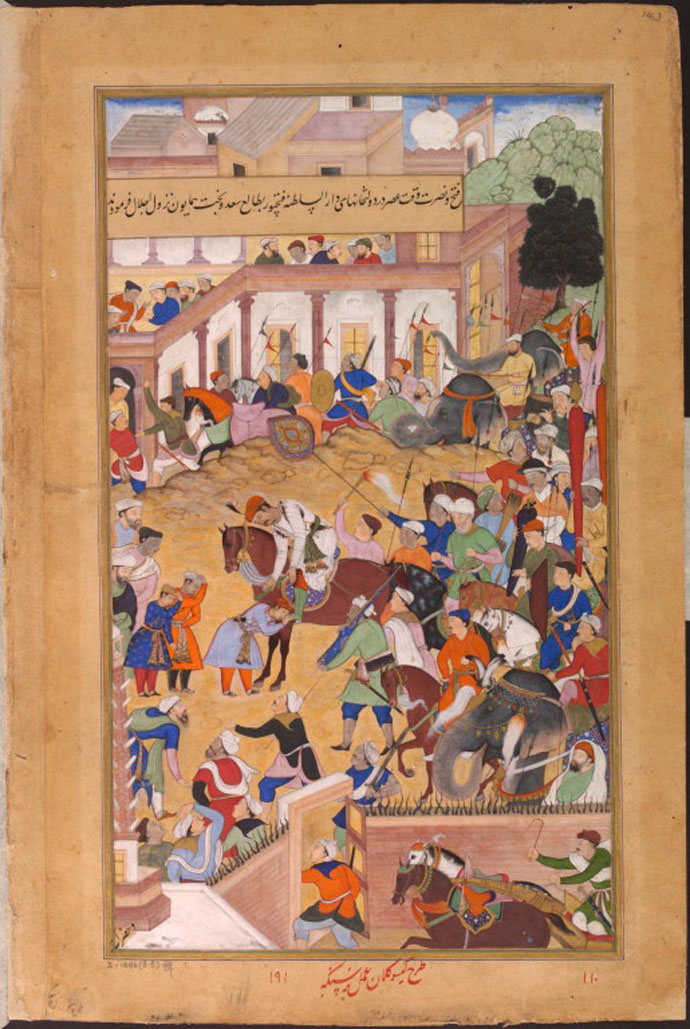 A one-kos road leads to it when one enters through the Bharatpur gate of the city. And then from the minar to just outside the Ajmeri Gate is another kos where stands the next milestone. The horn-shaped stones have long since disappeared and only the holes where they were once fixed remain. 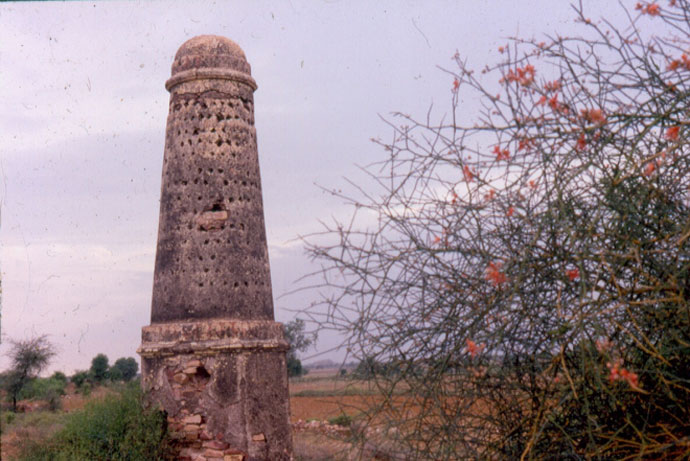 Jahangir had given general orders to fix deer-like horns on the kos minars erected on his road from Delhi to Lahore: he was possibly only duplicating what he had seen as a child in his father’s zero-milestone, which stood at the gate of the palace and near the grand polo grounds on the banks of the lake! 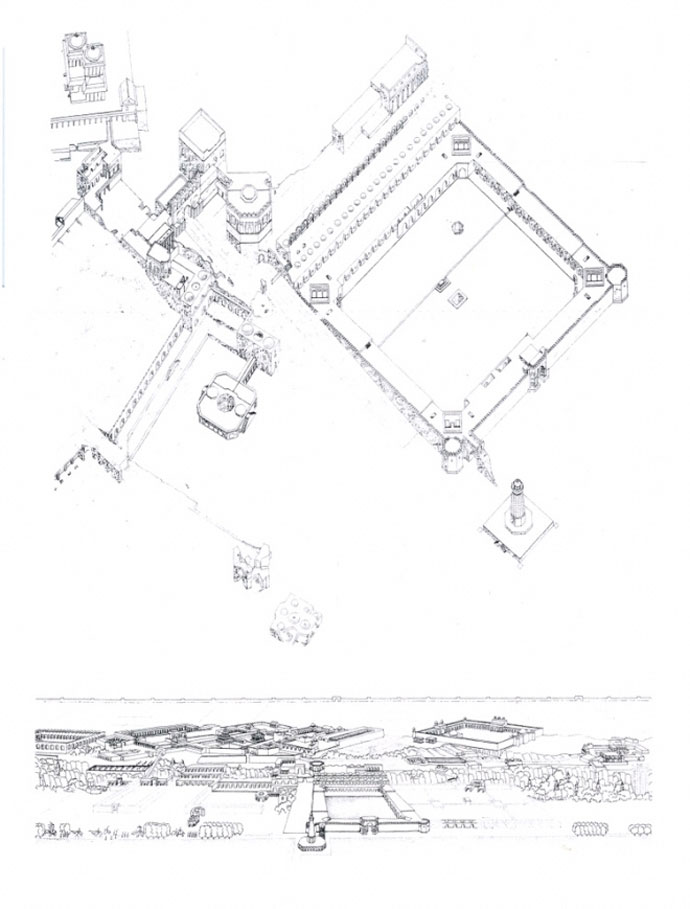 If one tries to draw a circle with the Hiran Minar as the centre, the whole town with its lake fits into it. The minar was not only the focal point around which the town was planned but also an architectural feature that marked the “face” of Akbar's capital!