Game of Drones? How bad writing in 'Game of Thrones' has turned into sexist cliché

Without proper source material, the series has become a crude impersonation of what it was in the first four seasons.

A rarely-spoken truth over the last few years has been that somewhere during its fifth season, David Benioff and D.B. Weiss’ Game of Thrones lost its way. Not coincidentally, this was also when they decided to depart from George RR Martin’s A Song of Ice and Fire. Without source material, the series became a crude impersonation of what it was in the first four seasons, as it lost everything that had made it special.

The creative choices since then have been logic-defying at best — and harebrained at worst.

We saw Jon Snow dying and coming back to life in a show where all deaths are permanent. We had a ludicrous scheme to convince Cersei and Jaime Lannister of the threat of the Wights — which involved all geographical rules of the universe being abandoned and characters covering massive distances twice in the span of an episode.

But even these paled in comparison to the bizarre Battle of Winterfell, which was contrived so much by the writers that it seemed like every character’s IQ had been quartered. This continued in the latest episode, The Last of the Starks, when Daenerys Targaryen — for no rhyme or reason — decided to fly her dragons to Dragonstone where one of them was killed. The Battle of Winterfell remains one of the biggest disappointments in terms of the screenplay! (Source: YouTube screengrab)

There are many who can forgive — or more likely, rationalise — all these instances of poor writing simply because they’re hooked onto the show and like it no matter what. These issues of contrivances and illogical plot devices are in the realm of craft.

But the problem becomes far more serious when we see the art aspect of Game of Thrones.

In the absence of good source material, the writers have resorted to the worst kind of regressive clichés with its central characters. While the show was always set in a dark, feudal and patriarchal world, its main characters often broke the rules. The conflict between a cruel world with oppressive rules and characters who challenged them created drama that was complex and somehow, realistic.

Daenerys, despite being a woman, aspired to be Queen of the Seven Kingdoms. Her ambition, kindness and generosity drew many followers, and she was able to surround herself with fiercely loyal advisors. Her rule in Essos was just — she made mistakes, but she established herself as a clever ruler whose biggest strength was being fair.

She locked up her dragons when she saw the damage they were causing to innocent people. She freed many slaves and destroyed their former owners which won her an entire army that fought out of loyalty for her. She used the right balance of power and diplomacy to win Jon Snow to her side and did the selfless thing by committing her army to the fight against the army of the dead. 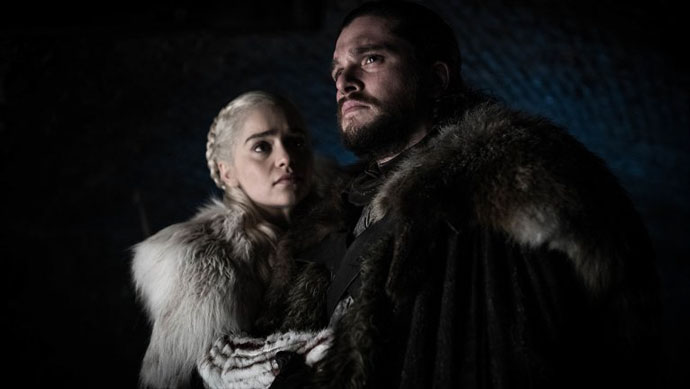 Jon inspires loyalty simply by virtue of being "one of them." Is this not the core idea behind casteism, racism and sexism? (Source: YouTube screengrab)

Contrast this with Jon Snow — he’s always been an inherently good man, but also a naive one, unfamiliar with the ways of the world to the extent that his first lover, Ygritte’s catchphrase was “You know nothing, Jon Snow.”

While his heart was always in the right place, he simply did not have the mental faculties to be a good leader. His poor management skills led to his own men killing him — if it weren’t for Ygritte, Melisandre, Sansa, and Daenerys, at some point of time or the other, he wouldn’t be alive. His inability to be a military leader was evident in the Battle of Winterfell, where he had to resort to yelling at a dragon.

Jon Snow is the quintessential hero of clichéd works of fantasy.

He wears his very kind heart on his sleeve, he doesn’t hesitate to sacrifice himself for the greater good and he doesn’t want the throne. And now, he’s inspired loyalty in many men in the North simply because he is “one of them” — a mentality behind institutionalised casteism, racism, feudalism and sexism.

And this has been glorified by the writers.

Daenerys, on the other hand, is now an overly “ambitious” woman guided purely by her emotions and desire to sit on the throne. She is no longer a "balanced" and "kind ruler" — while Jon is “tempered”.

Daenerys has now been turned into the Mad Queen who, for no rhyme or reason, has lost all empathy for ordinary, innocent people.

She’s willing to burn thousands of them alive for a purely personal reason, like the regressively stereotypical woman who is so overwrought with emotion that she cannot see reason.

Three of the most powerful women have been reduced to petty squabblers when the fate of humanity is at stake. (Source: YouTUbe screengrab)

It isn’t just a matter of these two characters. From the beginning of this season, all men are willing to forgive and fight alongside each other, regardless of their histories, because they apparently understand what the bigger threat is. But Sansa, Cersei, and Daenerys — three powerful women — have been the petty squabblers who fight each other over a throne when the fate of humanity is at stake.

Quite insidiously, the mediocrity of the writing seems to have led Game of Thrones back to a time where these sexist ideas were acceptable.

It goes to show that the power of art needn’t be used for evil with malicious intent because even lazy writing that resorts to internalised archaic formula can have the same effect!

Also read: From virgin-shaming to begging: Why Brienne Of Tarth deserved better in GoT S8 Ep4

#David benioff and d.b. weiss, #George RR Martin, #Daenerys Targaryen, #Cersei Lannister
The views and opinions expressed in this article are those of the authors and do not necessarily reflect the official policy or position of DailyO.in or the India Today Group. The writers are solely responsible for any claims arising out of the contents of this article.