So, the teaser of Kalank just dropped — and it looks extraordinary. With an ensemble cast like that — Alia Bhatt, Varun Dhawan, Aditya Roy Kapur, Sonakshi Sinha, Sanjay Dutt and Madhuri Dixit — to say that Kalank is one of the most awaited films of 2019 is an understatement.

Now Alia and Varun have always delivered hits, so expectations are to soar. Then, the fact that Madhuri and Sanjay are back together after about 25 years since Khalnayak — keeping their rumoured bitterness aside — makes it all the more exciting.

But call us biased or just plain obsessed with Game Of Thrones, we just couldn’t un-see the GoT references in the Kalank teaser.

In our defence, there were far too many to ignore.

The background track will first remind you of Netflix’s Stranger Things, and then swiftly pick up pace and transport you to Westeros. Go back and listen to it again. Do you hear it now?

“Kuch rishtein karzon ki tarha hote hai. Unhe nibhana nahin, chukana padta hai,” starts off Varun Dhawan in his throaty voice as the teaser of Kalank begins. Now, if it does not remind you of “The Lannisters always pay their debt” dialogue from Game Of Thrones, we don’t know what to say!

And then, there are the scene references.

3.). The meeting of the small council 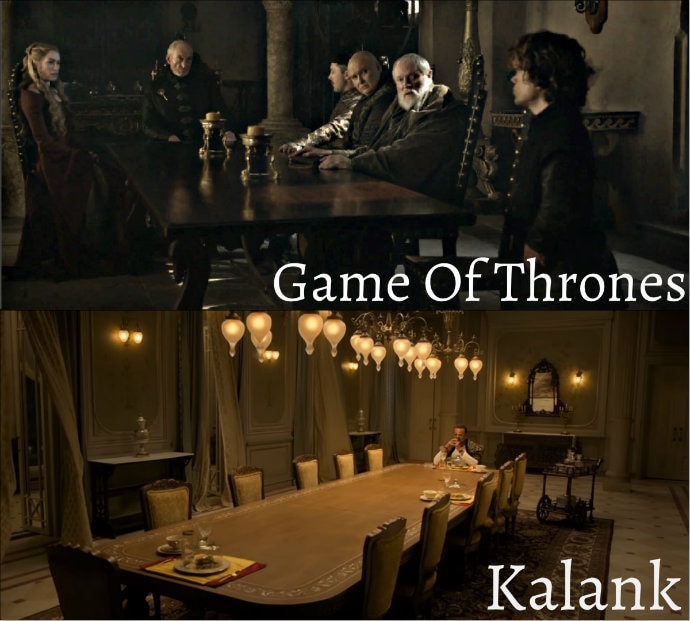 Every small council meeting was held in a scarcely-lit room, at a long rectangular table, with a ruthless-looking Hand Of The King residing over it. Sanjay Dutt reminds us of exactly that.

4.). The water gardens of Dorne Dorne is one of the most beautiful locations ever shown in Game Of Thrones. The lush green gardens and the majestic arches against it are simply mesmerising. When Alia floats across that water stream in a boat, we could only picture Dorne. Can you see it too? Remember Gendry, the blacksmith and the unacknowledged bastard son of King Robert Baratheon? And do you now remember his workshop in King’s Landing?

Varun hammering metal in a similarly dingy setup reminds us of that.

6.). The fighting pits of Meereen 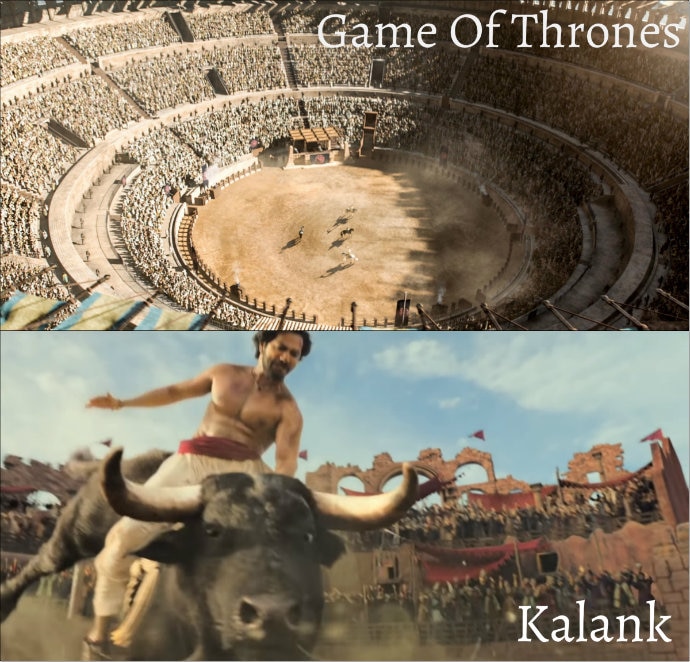 Varun is seen fighting it out in a combat arena with an audience cheering for him. He is clearly a slave, fighting a deadly animal, all for the entertainment of others.

Doesn't this remind you of the fighting pits of Meereen — slaves made to fight till they die for others' entertainment?

7.). Jaime Lannister and the dragon Jaime, clearly unequipped to fight a fire-breathing dragon, galloped ahead towards what only looked like his death, out of sheer bravado. Of course, we know that he is safe — as of now, that is. Aditya Roy Kapur in this scene finds himself in a similar situation — no, there's no fire-breathing dragon, but an armed enemy crowd could be equally deadly!

Psst. Guess when these two are releasing? April 2019! The final season of Games Of Thrones, season 8, that is, will release on 14 April — while Kalank releases on 19 April.

We rest our case!

Also read: 'Game Of Thrones' Season 8 is almost here. But what’s in it for you?