Last week, I mentioned that Jon’s latest project, going north of the wall to bring back a wight in order to convince Cersei to join their war against the Night’s King (just typing it out reminded me how ridiculous it was) seemed harebrained and suicidal. We knew someone was going to die, that the Walkers would have something up their armoured, chilly sleeves, and that Jon, never exactly the best battle planner or planner in general, would be shocked and surprised, possibly with fatal consequences. All of that turned out to be true, and then some.

Before we dig into the big events of this week’s episode, a quick recap of the other, smaller but nonetheless important things, that happened south of the wall. The conflict between Arya and Sansa is escalating, to such an extent that Sansa sends Brienne out of Winterfell to act on her “behalf” at some grand conference in King’s Landing (we can only assume it’s the armistice that Tyrion and Jaime have organised, though why Winterfell is being invited is left unanswered).

Sansa’s decision, though she makes it sound like a wise security measure — she refuses to let the Lannisters imprison her in the south again — can also be read as a means to keep Brienne, who she suspects of being Arya’s ally, away from her. Brienne is less than happy with this decision, citing the threat Littlefinger poses to Sansa, but Sansa is having none of it, and off the Maid of Tarth goes, to cross paths with Jaime once again.

That will be interesting, if nothing else. 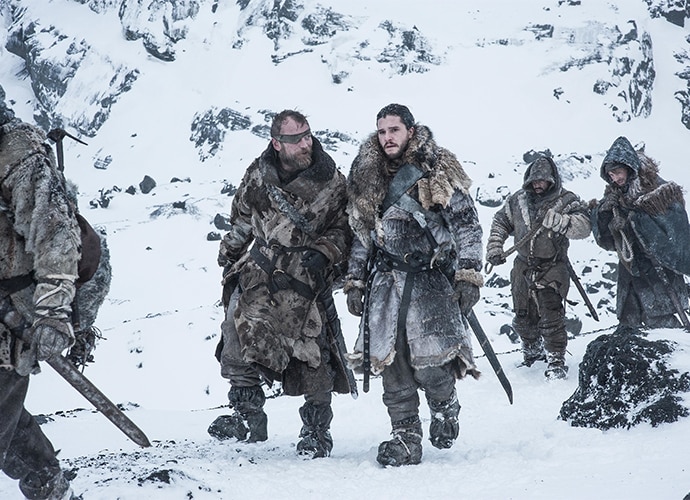 In a strange twist however, it’s Littlefinger who counsels Sansa about Arya’s continued loyalty, convincing her that Arya would ‘never’ betray or hurt her for one simple reason: "She’s your sister." Littlefinger’s words should of course be taken with a more than healthy dose of salt; he’s no stranger to setting relatives, particularly sisters, against each other. He did, after all, play the Tully sisters, Catelyn and Lysa, claiming to love Lysa while secretly pining for Cat, and even using that biting truth to seal her horrible death.

Sansa must remember this, since she was witness to her aunt’s murder (to be fair though, she had no reason to love Lysa), so any advice Littlefinger gives her with regard to her own sister will be edged with that memory. Arya though, seems to be going out of her way to spook her sister, coyly threatening to strip her own face for her collection, and enjoy being the Lady of Winterfell. Their stand-off ends with the Valyrian steel dagger, the one everyone has been playing hot potato with, coming back into Sansa’s hands.

Questions of the future hang heavy over some of the characters, most notably Tyrion and Daenerys. While the Lannister twins celebrate being pregnant again in King’s Landing, Dany is reminded that she cannot have children, nor does she have a designated heir to her throne. When reminded of her mortality by a very concerned Tyrion, she snaps back at him that she will only speak of succession “when there is a crown on my head.” Then she goes off to do yet another foolhardy thing, worse than her first mad dash into battle at the Blackwater Rush. She flies Drogon, and her other two dragons, Viserion and Rhaegal, to the north.

Why? Because of course, everything Jon Snow planned has fallen into complete and utter disarray.

Let’s now tackle that big thorny issue: Jon Snow and his plan. As you might have expected, or well, as I expected, it turned out to be a mess. They got the wight all right, but then the Avengers Redux (Jon, Tormund, the Hound, Beric, Thoros and Gendry, assisted by convenient and unnamed wildlings) ran smack into the army of the dead, and their captain, the Night King. What follows is madness, with Jon and company falling back into a little rock island in the middle of a frozen lake, Thoros dying from wounds inflicted by a wight bear, and all the unnamed wildlings being picked off by rabid wights. By some stroke of luck, Gendry is able to run all the way back to Eastwatch and write Daenerys for help, and she arrives in style, dragons in tow. But this is Westeros, the here, the villains aren’t usually bested by friendship and love. No, they have plans in place, and for some reason, the Night’s King seems prepared for even this. We can’t underestimate him, after all. He may move slowly through the north with his army, but when the dragons come out to play, he’s ready to slay.

Apologies, but I couldn’t resist.

While Jon’s company (with the notable exception of Jon) struggle onto Drogon, the Night’s King makes his move. With an ice spear that Qyburn would probably give a hand to study, he pierces the hide of one dragon, Viserion or Rhaegal, it’s hard to tell, and fells it in one thudding strike. What an entire Lannister army couldn’t do, Jon has managed with one little excursion: getting a dragon killed.

After that, the heroes aren’t willing to stick around, so off they fly, abandoning a helpless Jon. But in case viewers were getting their hopes up, he is rescued by the wight Benjen Stark, and not to be satisfied, ensures that he is destroyed as well as he rushes back to Eastwatch. When he revives, it’s to find a sighing Dany next to him.

Jon and Dany’s reunion is supposed to make us sentimental, and find hope in what we are reminded time and again is a grand romance, but his sudden switch to calling her “Dany”, not to mention his rather abrupt bending the knee, is more annoying than it is inspiring. We’re evidently supposed to believe this is him coming to his senses after multiple bad decisions, but it only seems to continue the trend. Jon’s about-turn makes no sense at all, nor does it come across as convincing.

It will be exciting though, to see what Sansa makes of this giving away of what she seems to be increasingly convinced is her kingdom. For the second time, Jon has made a major decision without consulting her, the more politically savvy of the two, and what she’ll make of it will surely be interesting, more interesting than the dull as ditchwater “romance” between “Dany” and Jon, the-man-who-lived-at-the-expense-of-literally-everyone-else.

#Eastwatch, #Jon Snow, #GoT Season 7, #Game of Thrones
The views and opinions expressed in this article are those of the authors and do not necessarily reflect the official policy or position of DailyO.in or the India Today Group. The writers are solely responsible for any claims arising out of the contents of this article.