We are led to first believe that the horror stands for one thing, then realise that it was about something else.

There is a brilliantly suspenseful sequence — hinging on an evil double — in the horror film Ghoul, released today on Netflix as a three-episode mini-series. Without giving away major spoilers, the scene has two manifestations of a particular character, one of whom we know to be the real person and the other a ghul (an ancient, malevolent spirit) who has taken on this physical form. These “twins” behave identically, each is seen in the company of other people who are imperiled, the film cross-cuts rapidly between them, and we have no way of knowing where the true threat lies.

As the sequence unfolded, all of us in the crowded hall (I watched Ghoul on a big screen*) vacillated every few seconds; people in nearby seats whispered nervously, “Yeh ghul hai, woh asli hai… nahin nahin yeh ghul hai”. It was a classic demonstration of audience manipulation. Even as a long-time horror and suspense buff, who doesn’t get easily spooked, I was captivated. But thinking about it later, this scene is also apt given the ambiguous (or to use a word with a double meaning, duplicitous) nature of the Ghoul narrative — where we are led to first believe that the horror stands for one thing, then realise that it was about something else.

As any student of the genre knows, some of the most famous horror motifs in literature and cinema have been responses to the real-world concerns or paranoias of the period in question — from Mary Shelley writing Frankenstein in the wake of the 18th century vitalism debates about the nature of life, to the disfigurement and deformity themes in films and art of the 1920s (a few years after the mass-scale brutalising of human bodies during the First World War), and so much else in between.

In that context, given the basic story of Ghoul, it is natural to think that the horror in the film represents terrorism in an exaggerated supernatural form. The story begins with the capture of a terrorist leader named Ali Saeed (Mahesh Balraj), and there is some nudge-wink wordplay about this man being a “monster”. The film’s protagonist Nida (Radhika Apte) is one of the military interrogators at a dingy detention centre who must break this dreaded prisoner. Instead, they soon find themselves dealing with something much more fearsome than they had imagined. Midway through, when Ali Saeed (or the ghoul possessing him) starts psychologically manipulating his captors, turning them against each other, it felt like a version of terrorist leaders “brainwashing” their followers and co-opting them to a murderous cause.

But as the narrative progresses, a subtle shift occurs and Ghoul reveals itself to be a sharply subversive film about other concurrent real-world threats: the threats of jingoism, hyper-nationalism and sectarianism, which we in contemporary India are starting to know a great deal about. This is a story very much of a time and place where minorities of various stripes can be judged without a trial, where criticism of a ruling party is conflated with disrespecting the country, where writers can be attacked and murdered in public, or made to feel like traitors if they don’t subscribe to “us” vs “them” polarities built around the cosmic accident of being born in this religion rather than that (or on this geographical territory opposed to that one). 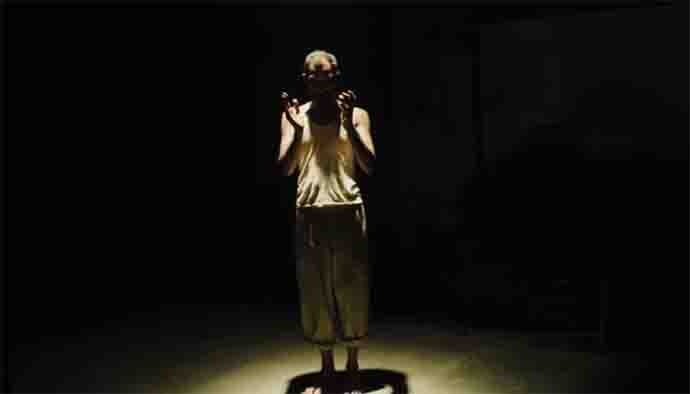 Some of the most famous horror motifs in literature and cinema have been responses to the real-world concerns or paranoias. (Credit: Screengrab/Netflix)

In a way, we have been prepared for this by the film’s early scenes, which show us — in a dystopian but recognisable India of the near future — a conflict of views between Nida and her father. He is a conscientious professor, worried about what is going on in the country, and is teaching his students to question everything; while she has aligned herself with the state and strongly disapproves of anything that might be perceived as anti-national, even children’s nursery rhymes. Shortly after this, the main narrative begins, and in the context of what happens in the detention centre, Nida comes across as a sympathetic, diligent figure – but our ambivalent attitude to her is still very much in place. And like many other characters in other horror stories, the events that follow will force her to look long and hard into the mirror — at her twin “ghul” that might be lurking there.

This is not to say that the film ever goes soft on terrorism (or on Islamist terrorism) — nothing as simple as that. Ali Saeed and most of the other prisoners in the detention centre are criminals who were responsible for the deaths of innocent figures. (There is also one prisoner named Ahmed who wasn’t a terrorist at all but was simply in the wrong place at the wrong time, and ended up incarcerated possibly because of his religion.) But the film does playfully raise the possibility that if, in an earlier cinematic idiom we had vigilante heroes like the Angry Young Man to fight injustice, today we might need to call on supernatural forces to protect us from bullying and bigotry.

There is a weary cliché, indulged in by people who don’t really understand or care for the genre, that so-and-so film “isn’t simply a horror movie, it is more than that”. As a horror fan, I don’t care for such patronising language, but I can — just about — forgive someone applying it to the ending of Ghoul. Its final shot (again, no big spoiler), where a character sets out to launch vengeance on an authoritarian state, has the swift, savage directness of a good propaganda film. And yet it comes on the heels of a mostly well-paced story that also works as a genre piece.

*Viewing tip: I watched Ghoul on a big screen, in a dark hall, as a two-hour-long feature film (which is how it was conceived, before being broken up into a mini-series). Needless to say, anyone watching an atmospheric film like this on a laptop screen should try to stay similarly distraction-free — otherwise much of the impact will be lost.

Also read: Who was Jasmine — the only woman monster to spook Ramsay horror films

#Horror movie, #Radhika Apte, #Netflix, #Ghoul
The views and opinions expressed in this article are those of the authors and do not necessarily reflect the official policy or position of DailyO.in or the India Today Group. The writers are solely responsible for any claims arising out of the contents of this article.

Writer and critic. Blogs at Jabberwock (http://jaiarjun.blogspot.in ). Author of Jaane bhi do Yaaro: Seriously Funny Since 1983. Edited The Popcorn Essayists.