Akshaya Mukul on why Gita Press is Hindutva's biggest vehicle

It has been at the forefront of demand for a Hindu nation.

Akshaya Mukul's book Gita Press and the Making of Hindu India received much critical acclaim when it was released in late 2015. Mukul wrote the book over a period of five years; it took him to Gorakhpur, Banaras, Allahabad, Lucknow and Chennai and to numerous archives and people who helped him extract data for his book.

The book is a fascinating read on how a publishing house, born out of the angst of the happenings in the Marwari world, went on to become influential in promoting an idea of Hindu India, and initiated Islamophobia and cow protection that continue to expose India's faultlines.

Here are the observations of Akshaya Mukul on the Gita Press as told to me:

I grew up in Ranchi, then a part of Bihar. Gita Press publications, mainly its monthly journal Kalyan was hard to miss in most Hindu homes, even the secular ones. All regular religious texts - Gita, Ramayana, Mahabharata - were published by the Gita Press. So I had some idea about the press.

At home, my father who was a follower of Kabir would talk about the Gita Press and its founders Jayadayal Goyandka and Hanuman Prasad Poddar. Somewhere it stayed with me. I studied history and what fascinated me was the history of print all over the world. In the late 1980s and 1990s, historians like Vasudha Dalmia, Francesca Orsini, Ulrike Stark and Charu Gupta produced stellar works on role of print in public sphere.

However, Gita Press and its stupendous success did not attract much attention among academicians barring a few like Paul Hacker, Monika Hortsmann and Monika Freier. This led me towards the Gita Press. My father again asked me to see if a book can be done. When I was applying for fellowship from New India Foundation run by historian Ramachandra Guha, I thought the idea of working on a full-fledged book on the Gita Press would be different from the usual subjects.

During my first visit to the Gita Press in early 2010, I was disheartened as the press officials were not very keen to share the story in detail. They agreed to give me access to old issues of Kalyan and other publications, but nothing beyond. A close acquaintance suggested I go to Gita Vatika, in the other part of Gorakhpur, where Poddar mostly lived.

In Gita Vatika, Hari Krishna Dujari, whose family had closely worked with Poddar and the Gita Press, agreed to show a few files. I still remember sitting in the huge veranda, outside the room where Poddar breathed his last, looking at his correspondence, pamphlets, monographs and all that constitutes a robust archive. My idea of the Gita Press changed.

I had initially envisioned that the Gita Press story would be merely one of philanthropy, but as I pored through hundreds of files I became certain that it was also a political project, a convenient tool of the Hindu Right groups like Hindu Mahasabha, Rashtriya Swayamsevak Sangh (RSS), Jana Sangh and odd organisations like Ram Rajya Parishad.

At the same time, the Gita Press recognised the deep crisis within the Marwari community and its unpopular image owing to its trade practices. The Kalyan addressed that as well. But the perfect blending of the sanatan dharma emphasis on rituals, texts and social practices with the ideals of Hindu nationalism is something I had not seen before. 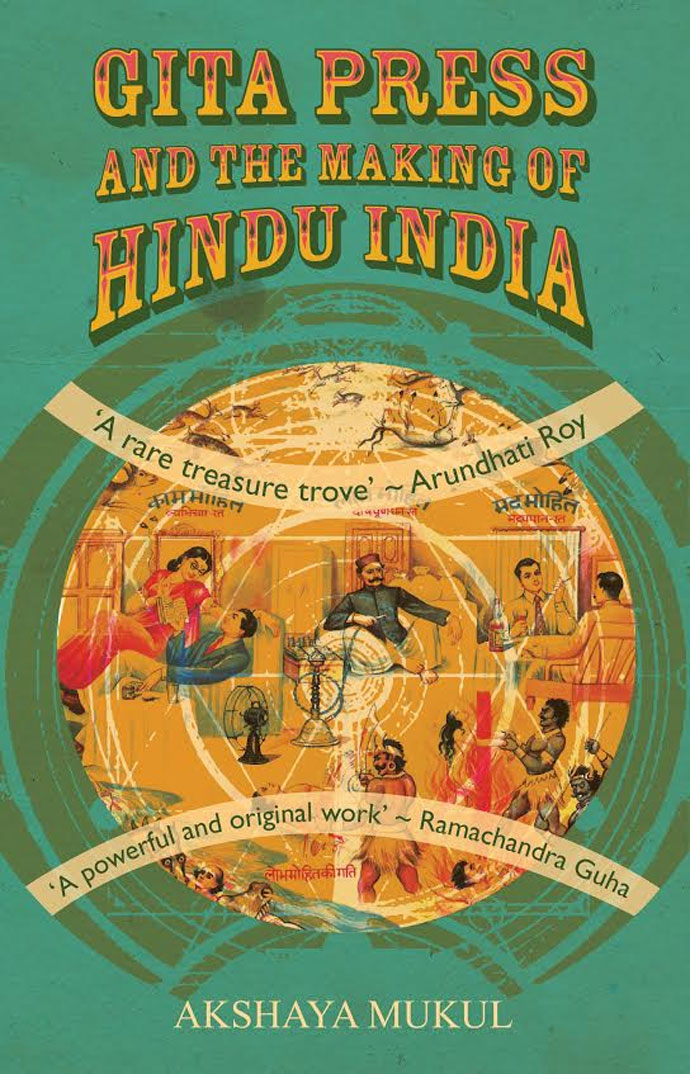 Gita Press and the Making of Hindu India, by Akshaya Mukul.

I was also struck by some aspects of Poddar's personality, especially the manner in which he reached out to people - from Mahatma Gandhi, Rabindranath Tagore to MS Golwalkar and the entire galaxy of politicians, academics and mendicants - to write for Kalyan. Only Jawaharlal Nehru never wrote for the magazine and the Gita Press campaigned against him because Nehru promoted the Hindu Code Bill.

Raising the noise for a Hindu nation

The Gita Press has been at the forefront of demand for a Hindu nation right from the beginning. If you see the Kalyan of the 1930s and 1940s you will be shocked at the way an avowedly religious journal spread the message of hate against Muslims, Dalits and educated women.

After 1947, the Gita Press talked of not letting Muslims join the Indian Army and forming a Hindu militia. Cow protection has been a key theme of the Gita Press's existence. Credit, if I may use the word, should go to the Gita Press for identifying themes like Islamophobia and cow protection that has kept the pot of Hindu nationalism boiling.

The regressive outlook of Gita Press Akshaya Mukul - Journalist and author of Gita Press and The Making of Hindu India.

The Nari Ank talks of how women are a source of social malaise from which they can come out by practising purity. This purity was a comprehensive concept that had to manifest itself in every aspect of a woman's being: education, marriage, domestic affairs, sex life and health. The promiscuity of men was neither part of the debate nor considered a problem. Only women were expected to remain chaste under all circumstances, to bear the unfaithful behaviour of their husbands and resist being seduced by other men. The Nari Ank's focus was on Western education and how "educated women get nasht-brasht".

The purpose of Hindu Sanskriti Ank that had contributors like Shankaracharyas, Mahant Digvijaynath, MS Golwalkar, Swami Karpatri Maharaj and many others was to establish the supremacy of the sanatan Hindu dharma. This was achieved through emphasis on the so-called comprehensive nature of Hindu culture with its long tradition of education, philosophy, medicine, architecture, science, music, language and literature, besides its numerous religious texts and ritual practices. Many of these articles had political and communal overtones.

On reforming the nasht-brasht Indian woman

The dialogues between Sarala and Savitri in the Nari Ank reveal the Hindu world view as interpreted by the Gita Press. The dialogue was published as a booklet in 1926 and continues to get printed. It sold lakhs of copies. It tells you about the problematic, misogynist moral universe of the Gita Press.

The choice of the women's names is interesting: the one seeking knowledge is Sarala, the simpleton (saral means simple or uncomplicated), and the one educating her about women's duties is Savitri, the devoted wife of ancient Indian mythology, the ideal Hindu woman. The angst of the Gita Press is that modern education has harmed Hindu women. Therefore, conversations like the one between Sarala and Savitri are relevant for the Gita Press. It is a dialogue that is not meant to change or keep pace with the society. It still wants women to preside over the household while men become masters of the outside world.

Merriam-Webster's Encylopedia of World Religions compared the Gita Press to the biblical society and said no other publishing house in India has marketed religion so successfully. In fact, in the early years of the Gita Press, Jaydayal Goyandka, the founder, talked of the proselytising work of the Christians in an envious tone. I would not like to comment on the Bible or Christian movements since my knowledge is extremely limited in that area. But I do not think the Gita Press overstepped its agenda.

I maintain it was a political project that used the message and tenets of sanatan Hindu dharma to homogenise Hindu religion and take the message of the RSS, Hindu Mahasabha and other such organisations to ordinary Hindu homes.

The reach of Kalyan

Kalyan has a monthly circulation of more than two lakh and mostly sells in north and east Indian states like Uttar Pradesh, Bihar, Madhya Pradesh, Chhattisgarh, Jharkhand and Rajasthan. It also has a English monthly called Kalyana-Kalpataru, started in early 1930s, that sells in south India and among the diaspora in the US and other countries.

Kalyan is read in ordinary Hindu homes for its stress on morality, purity and devotion. At the same time, the political message that it carries - a trend right from 1926 - helps in carrying out the propaganda in favour of its larger mission of Hindi-Hindu-Hindustan.

A resurgence of success for Gita Press

Around the time my book came last August, there was news of labour problems in the Gita Press. News channels went on an overdrive bemoaning the end of India's biggest religious press. The Gita Press is doing well. It is just that labour unrest has run parallel to its success. The press does not want to pay good salaries to its employees. But employees cannot run families on meagre salaries and the notion of working for a larger religious cause. This has been going on since the 1930s. The press will never close, more so now. Stakes are too high. Hindu Right cannot kill its biggest vehicle of propagation.

On the reaction of Gita Press to the book

The Gita Press has remained silent on the book. At least nothing has reached me. I was in touch with the authorities right in the beginning of the research but no help came except access to old issues of the Kalyan. I am sure they will not be pleased.

#Nationalism, #RSS, #Hindutva
The views and opinions expressed in this article are those of the authors and do not necessarily reflect the official policy or position of DailyO.in or the India Today Group. The writers are solely responsible for any claims arising out of the contents of this article.

The writer is a journalist currently based in New York. Her features appear in a number of publications in India and the US.