Why Sanju is a disservice to actor Sanjay Dutt

Wasn't Sanjay Dutt a superstar in his own right?

All human beings are flawed god’s creatures by definition. All art, since it’s made by human beings, is flawed too. Rajkumar Hirani’s Sanju is a flawed film about a flawed human being — good, bad and ugly, which is fine.

Hirani has approached his subject, Sanjay Dutt, like a house painter. He begins by scraping off the paint. The first layer reveals ugly layers beneath it. Hirani continues to scrape away at the underlying layers, until the interval, when he decides that it’s time to start putting down the first coat of new paint. The white washing begins in earnest.

It was twenty-five years ago that I saw Sanjay Dutt’s Khalnayak in Allahabad, first day first show. My friend and I had scored tickets in black. The atmosphere inside the theatre was anarchic. A cracker went off, leading to a mini stampede. The stalls, where we were sitting, were packed with unemployed men smoking unfiltered cigarettes. Each youth fancied himself to be a gangster, just like Sanjay Dutt. Sanjay Dutt had recently walked out of jail in real life. He does so in Khalnayak too. Twenty-five years ago I saw Sanjay Dutt’s Khalnayak in Allahabad. This hero was larger than life

This was a cult hero with a cult following. Everything from his entry, to the songs, was greeted with wolf whistles. Coins were flung on the screen. This hero was larger than life. Real and reel life was indistinguishable.

In Sanju, we get Ranbir Kapoor playing Sanjay Dutt, who played himself in Munnabhai. At times, Kapoor overdoes the walk and stoop, looking like a cross between Charlie Chaplin and Forrest Gump as far as body language and facial expression is concerned. Then Ranbir does what a good actor is supposed to. He frees himself from trying to approximate to the real-life star; he appropriates Sanjay Dutt, and goes and does his own thing.

While Hirani gets lost in the bends of the script: clearing Sanju’s name and blaming the media for giving Dutt a bad name (Hirani and Trump should join forces), Ranbir acts and acts and saves the film.

Vicky Kaushal who plays Kamlesh, an NRI Gujju businessman, Sunju’s unlikely accidental golden-hearted friend, is top notch. An incredibly versatile actor (remember the twisted cop in Kashyap’s Raman Raghav 2.0), it’s his shoulders, as much as Ranbir’s, that carry the film.

There are scenes that stand out, especially the one between Sanju and his girlfriend, Ruby (Sonam Kapoor), which takes place in the bathroom, while Sanju is having a drug and alcohol-fuelled meltdown. He garlands her with a toilet seat. She walks out on him but saves him from his own truth. She tells Kamlesh not to tell him what happened, since he wouldn’t remember it anyway and once he finds out he won’t be able to deal with it. 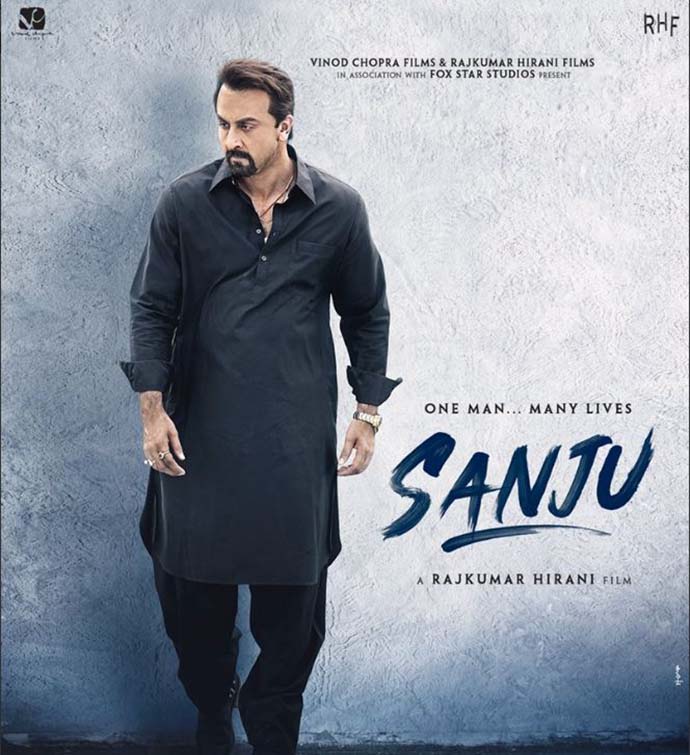 Ranbir overdoes the walk and stoop, looking like a cross between Charlie Chaplin and Forrest Gump

Sanju is candid about Dutt’s drug abuse though at times its filmi understanding of drugs is comical. The one acid trip in the film will go down as the fastest acid trip ever taken in history. LSD takes at least forty-five minutes to an hour to kick in. In the film the moment the Mickey Mouse stamp hits Sanju’s tongue, the visuals transform into tacky colors and he starts to trip. Acid is not instant coffee.

Another unintentionally funny one is Anoushka Sharma’s character, Winnie, “the world’s top biographer”. This is another Bollywood fantasy creation, a London-based biographer who writes books about museums and civilisations, before seamlessly moving on to a Bollywood star. The hoity-toity biographer speaks in a faux English accent but gives her book a Hindi title. During the shoot of Rockey, Dutt’s first film, Sanju romances a Hema Malini photo in a film magazine, which the director’s assistant holds up next to the camera to make it more real (the film’s heroine hasn’t turned up). The page flips to a poster of Amjad Khan in Sholay but Sanju continues bravely on.

The father-son relationship is always in the picture: the irreproachable father (Sunil Dutt, played by Paresh Rawal) who sets high standards and the wastrel son who can never match up. Manisha Koirala brings in Nargis but it’s a short role. 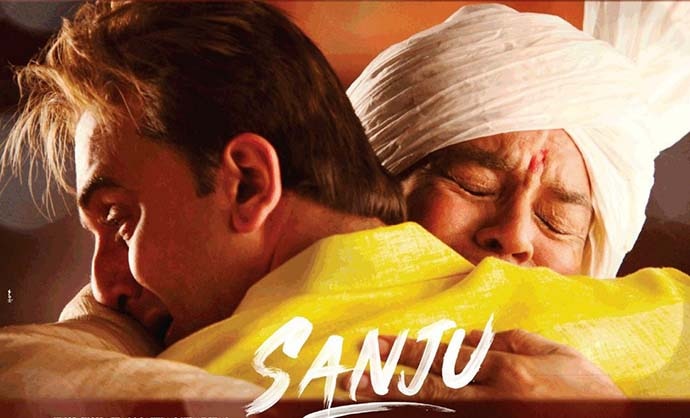 The film glosses over Sanjay Dutt's comeback and gives us the kid instead.

Throughout, Sanju is shown as someone who cannot do without his father. The handholding continues to the end and seems like a disservice to Sanjay Dutt the actor. When I was watching Khalnayak, I got the sense that Dutt Jr was a superstar in his own right. He must have turned up on the sets and done his job, again and again.

Sanju gets so involved in freeing Sanju from the clutches of the terrorist tag, the media and the aura of famous parents, that it ends up reducing Dutt to an infant. To be the comeback kid takes a lot of blood sweat and tears. The film glosses over the comeback and gives us the kid instead.

Post your comment
#Rajkumar Hirani, #Bollywood, #Sanjay Dutt, #Sanju
The views and opinions expressed in this article are those of the authors and do not necessarily reflect the official policy or position of DailyO.in or the India Today Group. The writers are solely responsible for any claims arising out of the contents of this article.