Why you must eat the gujiya this Holi!

According to popular beliefs, the gujiya belongs to the Bundelkhand region of our country. But it's certainly travelled far beyond that!

While two states have been rivalling each other quite bitterly over who had their first bite of the divinely sweet roshogolla, the rest of the country sits back, relaxes and nibbles on a gujiya.

There’s no fight over the origin of this sweet as long as there is enough of it — on Diwali and on Holi. But no matter how many similarities Diwali and Holi share between them — the victory of good over bad, festivity-turned-hooliganism, etc. — the gujiya belongs to Holi more than it belongs to Diwali.

We will tell you why. Eating the gujiya is also an art, like making one. You will discover new flavours with every lovely bite! (Photo: Rachna's kitchen via India Today)

But before that, let’s take a look at the history of the sweet available to public knowledge.

There are stories of how the idea of the gujiya might have actually originated from Turkey's Baklava, which is also a sweet wrapped in a flour cover.

But according to popular beliefs, the gujiya belongs to the Bundelkhand region of our country.

Now, this is a cultural region currently spread across Uttar Pradesh, Madhya Pradesh and Rajasthan. So, the gujiya is a very much North Indian dish. And so is the festival of Holi.

But things that melt in the mouth don’t abide by any such boundaries.

So, the gujiya traversed a long way in time and place and became pan-Indian. Of course, the name changed as it crossed states — one by one. So changed the stuffing inside — depending on what’s more popular locally. Like the North Indian gujiyas are stuffed with mawa, while the South Indian gujiyas may have a bounty of coconut. (Forgive stereotypes though!).

Holi is a true festival of feasting. On Diwali, people may keep a fast on the occasion of Laxmi Puja. So, the spirit of the gujiya, we feel, does not get properly appropriated or greedily enough munched through Diwali.

A ghee-fried dumpling of mawa and dry fruits which comfortably unwraps itself inside our mouth needs a heady occasion like Holi to fully express itself on.

No one keeps a fast on Holi. No one eats vegetarian dishes for religious purpose. Only drinking and eating — unbridled at that — is mandated. (Experts may enlighten us more on the link between smoking up and sweet cravings too). 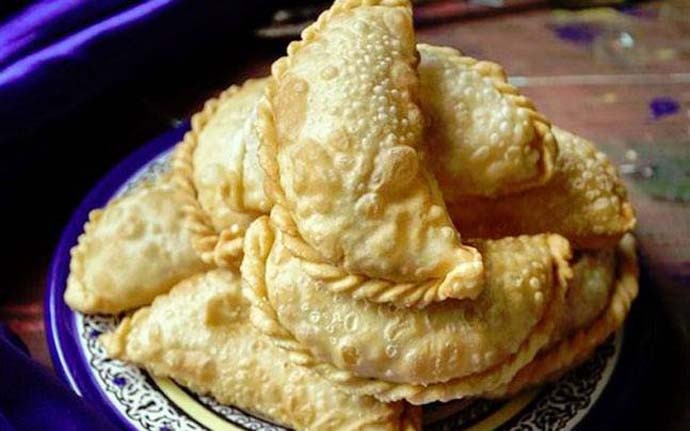 It's not possible to exercise moderation on Holi. Don't even try this at home! (Photo: Rachna's kitchen via India Today)

This is why the gujiya is so 'holi-some' — and you must eat some, or lots, this Holi.

Not to worry as well.

Homemade sweet dishes, as we have been told, are good for our glycemic index when taken in moderation.

This 'moderation' part can be a bit of a problem, given the heavenly taste of the gujiya.

Also Read: Why is Holi celebrated more in north India than south India?