Jim Kay seems to be having more and more fun turning the world created by JK Rowling into illustrations.

On his website, illustrator Jim Kay points out that it is "a tricky thing showing a big horse-type animal on a giant's bed!" And we imagine it is! He is, of course, talking about JK Rowling's Harry Potter and the Prisoner of Azkaban, where Buckbeak the hippogriff is "stretched out on top of Hagrid's patchwork quilt, his enormous wings folded tight to his body, enjoying a plate of dead ferrets". 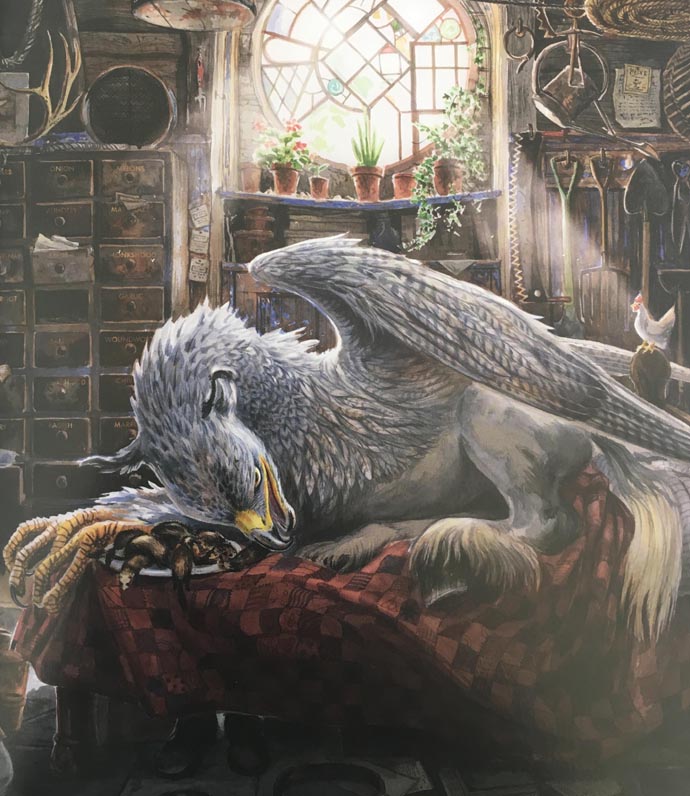 Kay's illustration gorgeously pins down this moment with his paintbrush - a weak light casts a sort of spotlight on Buckbeak, the backdrop, Hagrid's Hut, as ramshackle as we imagine it to be. The interior of Hagrid's Hut was inspired by a room at Calke Abbey, a crumbling country house estate in the UK. "Every wall has a beautiful patina, achieved through years of neglect - I love it," writes Kay about Calke Abbey.

This is the kind of detailed and fitting tribute that Kay has painted on the pages of the illustrated edition of Harry Potter and the Prisoner of Azkaban, which has been published by Bloomsbury. While there are many "definitive" rankings of the best Potter books, many Potterheads agree that the third book is perhaps the best in the series. For me, it was my gateway into the wondrous wizarding world.

Two years ago, Bloomsbury released the illustrated edition of Philosopher's Stone, and his illustrations fitted the text like a glove. While Chamber of Secrets did not quite live up to the hype, the third book more than makes up for it. The illustrations in Chamber of Secrets are luminous, and each one retells the narrative in their own way. The book is also designed sumptuously, with lots of care and thought. There's a feeling of movement in the design, as well as a certain element of darkness. The images are alternatingly beautiful, creepy, and funny. Kind of like the story itself.

This time three professors - Snape, Trelawney, and Lupin - make an appearance. But it's professor Lupin's black-and-white portrait that speaks volumes about the complexity of Harry's favourite Defence Against the Dark Arts teacher. What's really fun is, that just like in the story, Scabbers is omnipresent across the book, sometimes being chased by Crookshanks and at other times clearly petrified out of his wits. You can't help but look closely for his missing toe.

Then there's the Owl Post Office (complete with poop), The Leaky Cauldron, the Marauder's Map, the Herbology greenhouse - all truly magical. And yes, there is Sirius Black, and there are dementors and also a particularly hilarious one of Sir Cadogan and his steed (read fat, grey pony).

Kay has won the Kate Greenaway Medal in 2012 for his illustrations in A Monster Calls by Patrick Ness and he lives in Northamptonshire. In fact, Kay often talks about the kind of research that goes behind many of the images. As the series progresses, it's not hard to see that Kay seems to be having more and more fun creating these books. I almost wished I had a Time Turner to head to the future to see the Goblet of Fire edition. But then I changed my mind because truly Prisoner of Azkaban is going to be read and reread again.

#JK Rowling, #Prisoner of Azkaban, #Jim Kay, #Harry Potter
The views and opinions expressed in this article are those of the authors and do not necessarily reflect the official policy or position of DailyO.in or the India Today Group. The writers are solely responsible for any claims arising out of the contents of this article.