How psychedelic drugs made a comeback

Last week, an old college pal spent the better part of an hour on a phone call raving about the benefits of “microdosing” on LSD.

The term refers to the ingestion of sub-perceptual amounts of a hallucinogenic substance – one-tenth of a recreational dose: not enough for a full-blown trip, but just enough to heighten cognitive faculties, enhance creativity, improve concentration and alleviate depression, as votaries of the practice claim.

My friend Neil, currently employed as a systems analyst at a Silicon Valley corporation, claimed that he was able to write code at twice his normal speed after taking two drops of the liquid in the morning and said that many of his co-workers were into it as well. Neil is a pretty straight guy, a family man with two kids, so I was rather taken aback at his new found enthusiasm for a banned psychotropic substance.

Microdosing is currently the rage among hipsters, yuppies and middle-aged professionals across the United States. The wonder drug of 1960s is back in vogue, and fast gaining currency in groups that would not normally be associated with anything remotely “countercultural”.

Dr James Fadiman, a veteran of the Woodstock era, and author of The Psychedelic Explorer’s Guide: Safe, Therapeutic and Sacred Journeys, the bible of budding psychonauts, is more popular now, at the ripe age of 78, than ever before. Microdosing is currently the rage among hipsters, yuppies and middle-aged professionals across the United States

Fadiman’s book inspired the lawyer, novelist and mother of four, Ayelet Waldman, to fix her chronic anxiety and frequent mood swings by ingesting a small amount of LSD every three days. As the days passed, she started feeling the effects. She wasn’t as irritable, fought less with her husband (writer Michael Chabon) and reveled in the joy her children provided. She became vastly more efficient: Most of her time was spent on writing A Really Good Day: How Microdosing Made a Mega Difference in My Mood, My Marriage and My Life. “I found myself so effortlessly in the flow that I didn’t even notice time passing,” she writes.

My initial forays into the world of psychedelics were largely recreational – ingested at Grateful Dead, Phish and Santana concerts in the United States, and later at full moon raves on the beaches of Bali, Thailand and Goa. Some years later, I had the opportunity to try Psilocybin or “magic” mushrooms in a ritual setting with local shamans in Mexico and Guatemala as part of a documentary film project.

It didn’t quite work out as planned, since many of our intended subjects were understandably averse to being recorded on film. The glitch didn’t prevent us, however, from participating in the sacred ceremonies.

The term psychedelic was coined in 1958 by British psychiatrist Humphrey Osmond and is derived from the Greek word psyche (soul, mind) and delein (to manifest), hence "soul-manifesting", the implication being that psychedelics can access the soul and develop unused potentials of the human mind.

Psychedelics are beginning to gain mainstream acceptance in no small measure due to well-funded projects, led by some of the finest scientific minds in the country.

The ongoing clinical trials at NYU, using psilocybin to treat alcohol addiction — are part of the resurgence of psychedelic research taking place at several American universities, including Johns Hopkins, UCLA, the University of New Mexico, as well as at Imperial College, in London, and the University of Zurich.

The Multidisciplinary Association for Psychedelic Studies (MAPS) has been at the forefront of research in treating patients suffering from chronic treatment-resistant PTSD (Post-Traumatic Stress Disorder) with MDMA, commonly known as “Ecstasy”. MAPS got a big boost when the FDA recently designated its MDMA-assisted psychotherapy project as a “breakthrough therapy”, a move that took many observers by surprise.

Apart from MDMA, MAPS also advocates the use of Ayahuasca, Ibogaine and medical marijuana for a variety of conditions ranging from bipolar syndrome, drug addiction, autism-related disorders, ADHD and clinical depression.

The therapeutic use of psychedelics is by no means a new phenomenon. Between 1953 and 1973, the US federal government funded over a hundred studies of LSD, with more than seventeen hundred subjects participating. At the time, psilocybin and LSD were legal and widely available.

It was also tested on artists and scientists to explore the effects on creativity and divinity students to examine spirituality from a neuroscientific perspective. The empirical data gathered from these tests was largely positive.

LSD “truly was an acid, dissolving almost everything with which it came into contact, beginning with the hierarchies of the mind… and going on from there to society’s various structures of authority” says Michael Pollan in How To Change Your Mind: The New Science of Psychedelics.

The book is a deeply researched and highly engaging chronicle of the pre-modern history of psychedelics, their early adoption by the Woodstock generation, subsequent state suppression and their mainstream revival interwoven with Pollan’s personal account as a middle-aged psychedelic novice, hugely transformed by his experiences. Turn on, tune in, drop out is a counterculture-era phrase popularised by Timothy Leary in 1966.

Pollan is a professor at the Graduate School of Journalism at UC Berkeley and author of bestsellers like The Omnivores Dilemma and The Botany of Desire. What is remarkable about How to Change Your Mind is Pollan’s ability to shed the strictly materialist approach honed as one of the world’s foremost science writers and embrace a sense of wonder at the puzzle of human consciousness, the true nature of “self” and our role in the universe.

“…it is curious to me that what I see as the two greatest threats – environmental crisis, and [political] tribalism – these drugs directly address both those mindsets,” he told the Guardian.

“They undermine our tendency to objectify nature, to think of ourselves as separate from it. They undermine tribalism in that people tend to emerge from these experiences thinking that we are all more alike, all more connected.”

So how did we get here? It all started back in 1938, when Swiss chemist Albert Hofmann accidentally created lysergic acid deithylamide, or LSD, in his lab while conducting a research on another pharmaceutical compound.

He absorbed the drug through his skin and staggered home to lie down on his sofa, where, “in a dreamlike state, with eyes closed… I perceived an uninterrupted stream of fantastic pictures, extraordinary shapes with intense, kaleidoscopic play of colours”.

It was more than just a dazzling vision, though: Hoffman felt he had been given the keys to unlocking the mysteries of the universe, “the mystical experience of a deeper, comprehensive reality” 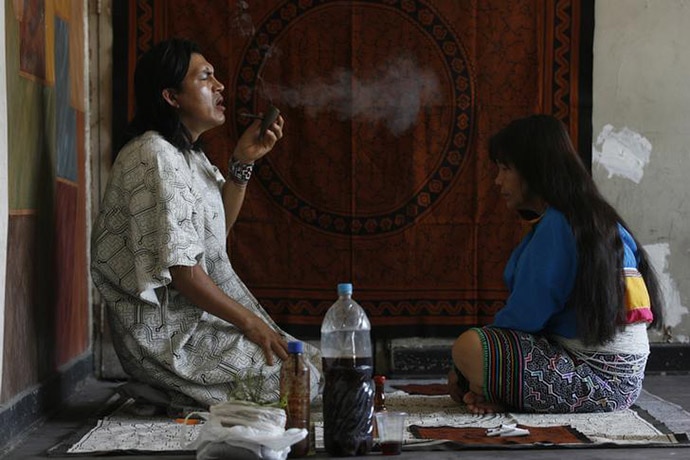 A few decades later, in August 1960,Timothy Leary, a clinical psychologist from the Harvard university, travelled to Cuernavaca, Mexico and ingested psilocybin mushrooms for the first time, an experience that radically altered the course of his life.

In 1965, Leary commented that he had "learned more about ... (his) brain and its possibilities ... [and] more about psychology in the five hours after taking these mushrooms than ... in the preceding 15 years of studying and doing research in psychology."

On Leary’s return to the States, he, along with Harvard colleague Richard Alpert (later known as Ram Dass), began a research programme known as the Harvard Psilocybin Project.

The goal was to analyse the effects of psilocybin on human subjects from a synthesised version of the drug , one of two active compounds found in a wide variety of hallucinogenic mushrooms, including Psilocybe mexicana.

Leary and Alpert were later fired from Harvard for distributing acid among the student body.

Leary became a lifelong evangelist for the therapeutic benefits of psychedelics. When he exhorted Americans to “turn on, tune in, drop out”, millions heard his clarion call and dropped acid like it was manna from heaven.

A whole generation was exposed to the mind-expanding effects of the LSD and it’s corollaries in the natural world:  psilocybin, mescaline and ayahuasca, which until then had only been consumed by the tribes in Central and South America under the guidance of a Shaman.

During 1960s and 1970s, he was arrested often enough to see the inside of 36 different prisons worldwide. President Richard Nixon described him as "the most dangerous man in America".

Theoretical physicist Carlos Rovelli, author of The Order of Time, says his romance with the quantum theory and the mysteries of the spacetime continuum were sparked by his LSD trips as a student radical at the University of Bologna.

“It was an extraordinarily strong experience that touched me also intellectually,” he told the Guardian in an interview.

“Among the strange phenomena was the sense of time stopping. Things were happening in my mind but the clock was not going ahead; the flow of time was not passing any more. It was a total subversion of the structure of reality. How do I know that the usual perception is right, and this is wrong?”

Rovelli has spent the better part of his life grappling with the relationship between space, time and consciousness, fundamental concepts that underlie existence, and how we simultaneously perceive the world and shape it.

“If I observe the microscopic state of things,” he writes, “then the difference between past and future vanishes… in the elementary grammar of things, there is no distinction between ‘cause’ and ‘effect’.”

The concept of time, he says, “has lost layers one after another, piece by piece”. We are left with “an empty windswept landscape almost devoid of all trace of temporality… a world stripped to its essence, glittering with an arid and troubling beauty”.

Similar images had crossed my mind all those years ago when I dropped acid for the first time. It was the closest I have come to what may be termed a religious experience.

While Silicon Valley biohackers and professionals microdosing on LSD to enhance their workplace performance may not be looking to bring about tectonic shifts in collective human consciousness or “fling open the doors of perception” as Aldous Huxley remarked after his mescaline experience, their flirtation with a substance that was once considered taboo for all but the fringe heralds the dawn of a braver and more accepting era, one not bogged down by the enforced dogmas of the past.

This may be the jumpstart our species needs to evolve beyond petty tribalism and embrace a compassionate and inclusive way of thinking about how best to utilise the brief and precious human existence bequeathed to us.

Also read: Can drugs be a way to enlightenment? Even Shiva smoked up

#Marijuana, #Magic mushroom, #Psychedelic, #LSD
The views and opinions expressed in this article are those of the authors and do not necessarily reflect the official policy or position of DailyO.in or the India Today Group. The writers are solely responsible for any claims arising out of the contents of this article.