Although October 16 this year is Hema Malini’s 70th birthday, October 2018 is rather special in her life as it also marks half a century of her journey as the film industry’s “Dream Girl” –  a name she was given in 1968 when she made her debut in Bollywood opposite Raj Kapoor in Sapno ka Saudagar.

B Ananathaswami, the producer of the film designed its posters and added the words “Raj Kapoor’s Dream Girl" below Hema’s face in the posters. After the film was released in October 1968, she started being called “Dream Girl” by the media as well as her fans. The film was neither directed nor produced by Raj Kapoor.

In fact, he was almost forty-five years old when he appeared as the first hero that the young and breathtakingly beautiful Hema was to act opposite to in her career in Hindi films. The film did not do well, though the songs were well-received. However, the name “Dream Girl” stayed with Hema Malini. In the 1970s, she even starred in a film called “Dream Girl” opposite Dharmendra. This strengthened her image as the only Dream Girl of Bollywood.

After Sapno ka Saudagar, her film Abhinetri, in which she played the role of a classical dancer opposite the charming and energetic Shashi Kapoor, helped her emerge as a beautiful heroine with great dancing skills. Her dance was always a part of her personality and gave her an added dimension of fine grace as an actress. The way she carries herself and maintains a dignified manner owes a lot to her being a born dancer. 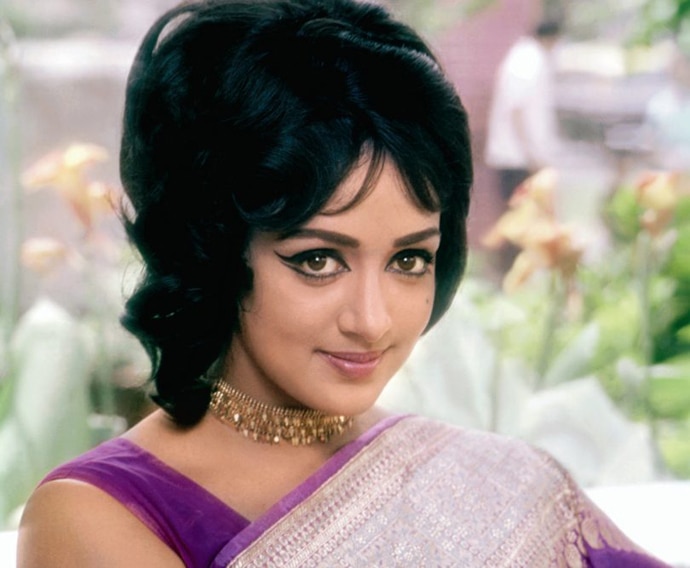 Hema Malini made her debut in 1968 opposite Raj Kapoor in Sapno ka Saudagar. (Photo: Screengrab)

Johny Mera Naam opposite Dev Anand gave her the kind of fame after which she never looked back. She worked with Dev Anand in Amir Garib, Shareef Badmash, Jaaneman, Chhupa Rustam and Joshila in the 1970s. They were a successful screen pair in those days.

What  made the name Dream Girl so appropriate for her was her exquisite beauty, her apparently ageless looks and her being looked upon by the audiences as “an ideal Indian woman.” If Dev Anand was regarded as the evergreen male star, Hema has surely been the evergreen female star of the silver screen!

Her film Baghban (2003) showed her looking amazingly young and glamorous. Her many films opposite superstar Rajesh Khanna and those with Dharmendra saw her career progress extremely well and with great stability. Andaz, Mehbooba, Dard, Kudrat, Prem Nagar and Rajput are among the films she did with Kaka. With Dharmendra, she worked in Sharafat, Raja Jaani, Dillagi, Dream Girl, Chacha Bhatija, Kinara, Pratiggya, Jugnu, Seeta aur Geeta, Naya Zamana, Charas and some others.

Their most memorable film together is, however, the iconic Sholay (1975) in which their characters of Basanti, the tangewali and Veeru, the macho, humourous gangster, have become an important part of the history of our cinema. Their wonderful on-screen chemistry had a lot to do with their actual feelings for each other.

As Basanti, Hema Malini exuded a kind of energy that had people coming back to the cinema halls to watch her again and again, talking endlessly and parading around as a symbol of woman empowerment who has no reservations about driving a tonga and fending for herself.

Earlier, as a newcomer, she had played a young widow with a child in Ramesh Sippy’s Andaz where she finally marries a widower, Shammi Kapoor. While Sippy had described this role to her, she was first a bit hesitant as it was a character ahead of those times. Eventually, she took it up as a challenge and excelled in the film. In Gulzar’s film Khushboo (1975), Hema Malini gave a brilliant performance as Kusum, a rural girl who is determined and assertive but quiet and silent at the same time. The film is based on a story of famous Bengali writer Sarat Chandra Chattopadhyaya and Hema’s restrained portrayal of a Sarat Chandra heroine is indeed marvellous.

Gulzar’s Meera (1979) and Kamal Amrohi’s Razia Sultan (1983) also show the actress in out-of-the-box roles that prove her versatility effectively. In Yash Chopra’s Trishul, she played a confident young businesswoman to perfection. Her battles of wit with Shashi Kapoor in the film were very interesting Her role as Reshma in Feroz Khan’s Dharmatma (1975) remains etched in one’s mind. She has a very different, exotic look in this film.

She has, over the past fifty years, been a great entertainer and mesmerized viewers down the generations with her acting and dancing. She has kept up with the changing times and remained a great favourite of film-goers. Even today, when a woman tries to be a little proud of her looks, people sometimes say ”Apne aap ko Hema Mailini samajhti hai”.

So, Hema ji has become that measure of perfect beauty with which any woman’s beauty may be assessed .For this Dream Girl , one can easily use  the words that Shakespeare wrote about Cleopatra – “Age cannot wither her ,nor custom stale ,her infinite variety.”

So here’s wishing Hema Malini a happy birthday and many more to come. Long live, our Dream Girl!