Systematic disadvantages are not mere hiccups.

The central premise of the movie Hichki is of “reform”. And the narrative rests on what we have been fed in these neoliberal times – the valorisation of agency, that one is able to change one’s destiny through sheer hard work not barring structural inequities.

What then ensues in the movie is a series of hackneyed and trite reassertions of this narrative, representations that mirror order vs disorder, where order is implicitly shown as the prerogative of the rich and disorder that of the poor, and therefore the movement towards order from disorder with sheer belief in one’s agency. 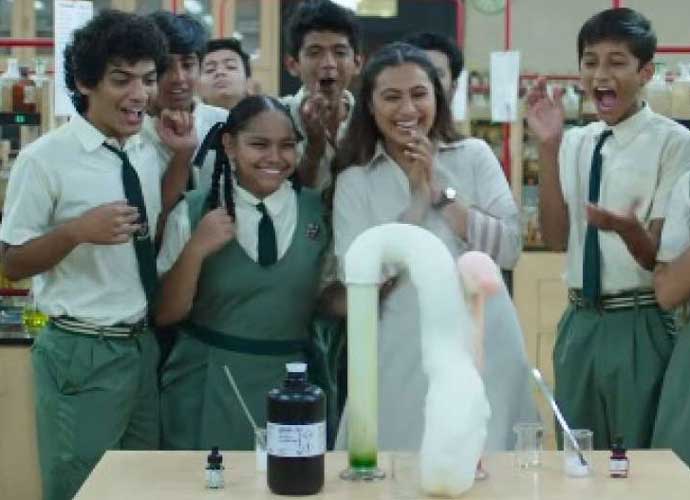 Naina Mathur has surpassed the agonies of Tourette syndrome and is now a crusader helping students with matters concerning exclusion in their social set-ups.

This is backed up by a story of a certain unrelenting Naina Mathur, who has surpassed the agonies of Tourette syndrome and is now a crusader helping students with matters concerning exclusion in their social set-ups.

Set against deprivation, exclusion, social prejudices, the film has huge potential to question the system, and in all fairness, it does so in small measures. Mathur’s innovative ways of teaching of range from extending the spaces of learning beyond the four walls of the classroom to showing the relevance of education in everyday lives to acknowledging that there are different ways of learning.

However, they all end up being tokenistic, with little screen time, instead of being the crux of the movie. The systemic disadvantages are casually glided over in an atmosphere of hope and happiness. The movie, thus, fails at multiple levels. One, in terms of representation, two in the myth of “individual reform”, and three, in the larger narrative that the first two are woven into.

A clean-shaven, trim, submissive boy is pitted against a rebel boy with unruly hair and an unrulier attitude. The battle then is of the clean, sterilised rich vs the dirty, disordered poor. Manipulatively, the battle lines have already been drawn and the movement has already been chartered in the audience’s mind.

The journey has to be from the “dirty” to the “clean”. The body, which is submissive to the logic of capital, and the systems which work to keep the mind docile, is where the unruly rebellious spirit must move towards. Foucault perhaps would have been mighty proud of class 9F, where all the disadvantaged students who epitomise disorder are admitted. However, not so much in the movie. Their skills, abilities are appreciated, yes. But they must be tamed so as to cater to the system.

Appearance is just one aspect of skewed representation. The children in 9F are shown as unwilling to learn, disinterested and unnecessarily adamant in their failing, self-harming rebellion. They are thus represented as bodies that are to be objects of reform.

This is untrue on several levels – children from disadvantaged sections are not necessarily unwilling to learn. To the contrary, across the villages in Yadgir, Karnataka, where I have worked, they work very hard to beat the systemic disadvantages they are pitted against.

Sarala (name changed) in Gaddada Narayana Tanda on the outskirts of Surpur in Yadgir argues with her father, hides under the hay stacks and uses all her agency to pursue education, against all odds. This false representation then is disrespectful and an affront to many like Sarala, working very hard in remote villages.

If representation is one aspect where the film fails children from disadvantaged backgrounds, by propagating the idea of “individual reform” as paramount to succeed, it fails them further. A central device in the film is to use the metaphor to draw a parallel between disability and deprivation. Further probe is needed to evaluate if this is fair.

It is true that disability and deprivation both lead to exclusion. And in a society which obsesses over “order”, anything disrupting this view will amount to exclusion. However, deprivation differs from disability in that deprivation is a social doing. The fact that scores of children do not have access to education, or when they do, still cannot read, is not because of an individual shortcoming, but because of structural constraints larger than the individual.

In a country where 17.8 million children are out of school, calling the lacks ‘individual’ and a minor “hichki” (hiccup) that needs to be overcome is gross misrepresentation. In an almost nauseous moment in the movie, Nina Mathur, the transformative teacher, is seen reprimanding a boy to stop playing the “victim”, thus propagating the idea that the poor use structural disadvantages to their ends, and the ‘lack’ is in fact in themselves.

The metaphor then is further stretched to include the apathy of the “other” middle class/upper middle-class/ rich. This section is symbolised by a teacher pitted against Mathur, who does not believe that any good can come out of the students in 9F. The prejudices of this section of the society are shown to be a hiccup. If drawing the metaphor in the first instance is a gross misrepresentation, in the second instance, it is an under-representation of the underlying malaise.

The problem with Hichki then is the problem with our times. The problem of the narrative of triumph of an individual against all odds, and the final victory being “fitting” into the system.

The system could have failed you, the conditions keeping the system stable could have excluded you, but you must try to “fit into” it and perhaps even aid it to continuously reproduce the conditions of exclusion. While the narrative of “individual conquering all” is heartening, it belies the injustices inherent in this.

It is indeed true that the agency of an individual has been debated from time immemorial, but what makes the debate one-sided in these times is the over-emphasis on the self overcoming all hurdles and thereby absolving every other entity – state, society and market.