Why we must worship Goddess Kali

As the transforming power of time, she can usher us into a new era of global peace and understanding.

Ma Kali is the most misunderstood of all Hindu Goddesses, though she is often regarded as the most powerful. Kali's dark and fierce form is certainly intimidating and hard to fathom, unless one is willing to look with discernment behind the veil of sensational images about her.

Ma Kali was first introduced to the modern world by Ramakrishna Paramahansa as the Supreme Mother of the Universe. Through Ramakrishna - an avatar for many - the inspiration of Ma Kali awoke India to its ancient spiritual heritage and brought the unifying message of yoga to the world.

This was at a time in which the world was dominated by colonial powers and the idea of a Universal Mother was not accepted - much less a World Mother who was dark in colour and fierce in demeanour from a backward country like India!

Yet instead of following Ramakrishna's yogic teachings about Kali, most scholars today look at Kali in an alien and diminished light. What psychologists tell us about Kali often reveals more about their own fascinations with the subconscious mind, rather than the Great Goddess who looks over all of us with wisdom and compassion.

Yogic deities can be best understood according to meditation practises. They relate to energies of higher consciousness beyond the dualities of the mind and the urges of the body. As such, their appearances are dramatic and paradoxical - mind-blowing as it were, and intentionally so.

Ma Kali is kala shakti or the power of time. She indicates the impermanence of all things, which is why she wears a garland of skulls. Yet she is also the ultimate transforming power of time, which is to take us from death to immortality. Along with endless time, Kali is boundless space, the limitless void, indicated by her dark blue colour. Her magical dance of transformation is all existence.

Kali holds the vidyut xhakti, the lightning or electrical force of consciousness that is the supreme power. All the goddesses and the entire universe manifests from her indomitable force. Kali's seed mantra is "kreem," which is the kriya shakti or power of transformation behind the vast movement of life.

Also read - How Siva evolved over the years

Kali is not the goddess of death and destruction as some see her but, on the contrary, represents the complete victory of the Divine over all death and destruction. Her warrior goddess form removes all the illusions of the mind and reveals the undying presence of our inmost Self that is one with all.

Ma Kali as the yoga shakti

Kali is the inner power of yoga or yoga shakti. Yoga in the true sense is a practice of mergence and return to the Divine source of existence. Yoga rests upon nirodha, the full concentration of the mind and dissolution of the ego. Kali is the nirodha shakti, the power of negation, neti-neti, not this, not that, of the Upanishads.

Kundalini shakti, the secret yogic power of transformation within us, works through Kali's grace and motivation. Kundalini ascends and dissolves all the chakras, or energy centres within us, back into the state of pure unity consciousness that is Ma Kali's ultimate abode.

Kali is the Shakti inherent in Shiva as Mahakala, the great lord of eternity. She dances on Shiva in a prone form, showing the Divine life and joy that manifests out of absolute stillness and transcendence. 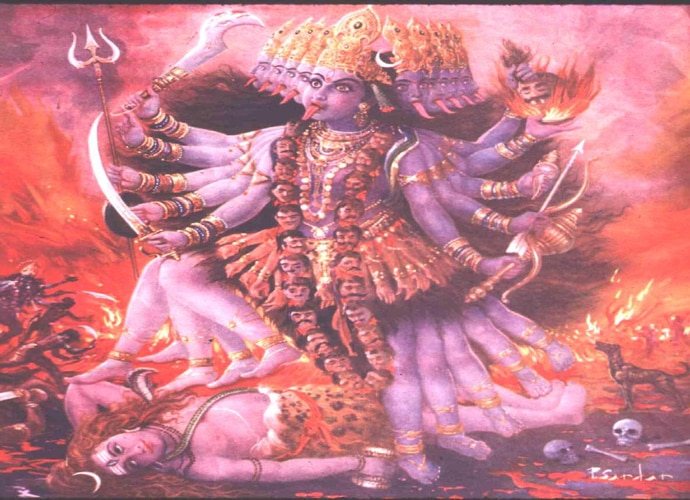 Kali reminds one of Tagore's verses "Let me carry death in life that I may know life in death."

Yet, Ma Kali has a crucial social relevance today. Kali as the transforming power of time can usher us into a new era of global peace and understanding, if we can accept her demand for a real change of consciousness. Kali asks us to live for eternity, not merely for fleeting enjoyments or outer material gains.

Those seeking to bring the Divine Light into the world should worship Ma Kali.

Ma Kali as the supreme form of the Universal Mother absorbs her children back into her blissful embrace. She takes us across the deepest darkness to reach the highest light.

#Hindu mythology, #Shiva, #Goddess Kali
The views and opinions expressed in this article are those of the authors and do not necessarily reflect the official policy or position of DailyO.in or the India Today Group. The writers are solely responsible for any claims arising out of the contents of this article.