How temples tell stories from Mahabharata and Ramayana

In the ancient Indian context, narrative architectures have been widely adopted as a medium of storytelling.

With grand movies like Baahubali and the one planned on Bheema creating a lot of buzz on how they help to recreate the past, preserve culture in modern times and communicate the glorious past for global consumption, it would be interesting and relevant to explore the means that ancient Indians adopted to preserve the rich cultural heritage for generations to come.

With stone architecture being a static medium withstanding the test of time, visual arts, theatre and music formed the dynamic means of preserving and propagating the rich cultural heritage of the land.

In the ancient Indian context, narrative architectures have been widely adopted as a medium of storytelling. Every panel in an ancient temple had a story to tell. The story could be a simple anecdote or an entire epic represented as intricate carvings.

It is amazing to note how stories from the Mahabharata and Ramayana are even now etched in the collective memory of Indians through their depictions in various temples in India and abroad, not forgetting the contribution of oral traditions, though. The level of detail captured by these sculptures intrigues visitors in these temples. This sculpture of the Pandavas and Draupadi can be found at the Dashavatara Temple in Deogarh, Rajasthan. The temple was built around 500 CE in the Gupta period and serves as a place to study the Gupta style of architecture. Notice the unique headgear adorned by each of the Pandavas.

The main panel at Mahabalipuram shows the descent of Maa Ganga when Bhagiratha performed tapasya. Bhagaritha’s forefathers, who were sons of Sagara, were burnt to ashes by Kapila Muni because they had disturbed his penance. In order to free his ancestors from the curse, Bhagiratha undertook penance to bring the celestial river Ganga, who could wash away their sins.

A closer look reveals a meditating cat whose story is narrated in the Udyoga Parva by Duryodhana, comparing its cunningness and hidden agenda to Yudhisthira’s attitude. While some historians attribute the meditating emaciated person on the left to Arjuna, some say it is Bhagiratha. This carving is found in Amba Theertha, in a place called Kalasa in Karnataka. Amba theertha is named after Goddess Parvathi and is a water spot. When Yudhisthira lost the game of dice, the Pandavas and Draupadi had to go on exile to the forest. Unable to be separated from the Pandavas, numerous sages accompanied them into the forest.

Draupadi filled it with food and, to her surprise, the vessel could never be emptied. Once the sages and Pandavas had their meal, she too had hers and then the vessel became empty. The Chennakesava temple at Belur in Karnataka has one of the finest and intricate carvings of the Hoysala architecture. Built by King Vishnuvardhan, it took about 103 years to complete. Arjuna lifting his bow to shoot the matsya yantra during Draupadi’s Swayamvara can be seen at this temple. 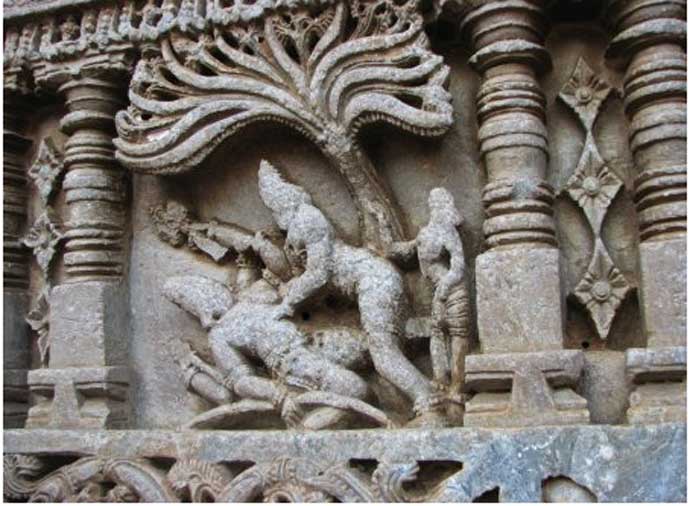 The beautiful Amriteswara Temple of the Hoysala Period in Karnataka depicts the combat between Shiva (dressed as a hunter) and Arjuna, after which Arjuna obtained his Pashupatastra. The narrative appears in the Vana Parva-Kirata Parva.

In the Kirata Parva of the Mahabharata, Arjuna sets out to attain the Pashupatastra. As he was wandering, he saw a wild boar rushing towards him to slay him. Arjuna, who was known for swift response and reaction, strung his Gandiva and pointed it at the boar. At that very moment, a hunter (kirata) and his wife were present at that spot.

Both Arjuna and the hunter shot an arrow at the boar and the boar fell dead. The boar revealed its true form, which was a rakshasa. An argument erupted between the hunter and Arjuna as to who shot the boar first. Arjuna showered arrows at the hunter and a fierce battle started. 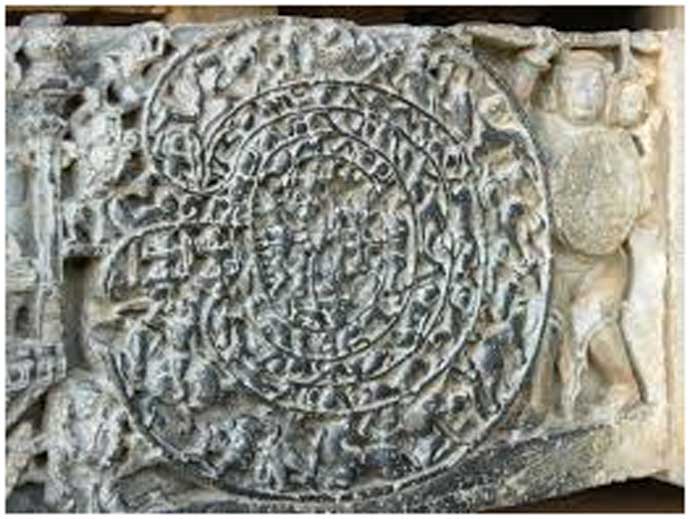 Arjuna kept showering arrows but the hunter accepted them with a smile. Wonderstruck by the fact that his arrows had no effect on the other person, Arjuna stood still. He soon realised that this must be none other than Rudra - Shiva himself. He surrendered to Shiva, asked for forgiveness and rendered a sloka. He won the blessings of Shiva and obtained the Pashupatastra.

The Chakravyuh that took Abhimanyu’s life in the Mahabharata war is shown in marvellous carvings at Halebid Temple, Karnataka. Abhimanyu, the son of Arjuna and Subhadra, learnt the art of entering a Chakravyuh (an army formation) when he was in the womb. During the Kurukshetra War, when Abhimanyu entered the Chakravyuh, Jayadratha prevented the other Pandavas from entering the formation. Stuck alone, Abhimanyu used various strategies to defeat great warriors but was killed by Dushasana’s son.

The Kailasanatha Temple at Ellora, Maharashtra, is one of the largest and most beautiful rock-cut temples. Built in the 8th century by Rashtrakuta kings, the temple complex has numerous caves decked with carvings depicting the Itihasas and Puranas. The Mahabharata war can be found in Cave 16 of the temple complex.

Pattadakal in Karnataka is a UNESCO World Heritage site. Ruled by the Badami Chalukya kings, one can find 7th and 8th century Saiva and Jaina temples there. Bhishma lying on a bed of arrows can be seen at the temple. The panel shows Arjuna on the chariot with a bow.

On the tenth day of the Kurukshetra War, Shikandin stood in front of Arjuna. Due to Bhishma’s vow that he would not fight with someone not qualified for fighting, he dropped his bow and arrow upon seeing Shikandin in the front. Arjuna shot numerous arrows and Bhishma fell down with these arrows piercing his body. Since Bhishma had a boon of choosing his day of departure, he waited until Uttarayana to leave his body. The fame of the Mahabharata not only spread throughout India but to other parts of the world, especially Cambodia, Indonesia and Thailand. Their dance forms have various scenes from the Mahabharata.

The Angkor Wat temple complex in Cambodia is a vast site measuring more than 160 hectares. Built in the first half of the 12th century by Suryavarman, the temple was dedicated to Lord Vishnu. The Mahabharata war and Bhishma lying on the bed of arrows is depicted in panels at Angkor Wat.

These intricate stone carvings on the Mahabharata present a multidimensional aspect of the various stories. They do just narrate a story but recreate the scene by presenting the various facets of the scene, including the attire, hairstyle, multiple worlds and beings and army composition and formations. With knowledge and a little bit of imagination, these carvings can bring out grand stories, live, to the onlooker.

Also read: How we created the myth of Muslim invader and a battlefield out of Babri

Post your comment
#Architecture, #History, #Hinduism, #Temples
The views and opinions expressed in this article are those of the authors and do not necessarily reflect the official policy or position of DailyO.in or the India Today Group. The writers are solely responsible for any claims arising out of the contents of this article.

The writer is co-founder, Anaadi Foundation, an organisation that is working towards spreading the essence of Indian thought and principles to young people.