Of sarais and Sultanates: What the remains of two centuries-old inns in Delhi tell us

Spaces of public use have changed a lot since the medieval times, but some things remain the same.

When Ziauddin Barni, a 14th-century chronicler, laments the ruin of the city of Delhi due to the change of capital ordered by Tughlaq Sultan, Muhammad, the first thing that comes up in his list of losses is sarais – medieval structures of public use that can be compared to modern day inns or hotels.

This reference establishes the significance of the sarais in the pre-modern consciousness. Sarais were spaces where travellers could stay for a considerable period of time. If they were merchants, they could also store their goods in these places, with special arrangements made for security. Usually, these inns charged a small sum, but some establishments were free of charge as they were built by nobles or royal personages looking for benefits in the afterlife.

Delhi as a city, or as several cities, boasted of many such structures. The memory of these public spaces, however, has been easily eroded, and the only hint of their presence remains in the names of areas and localities with prefix or suffix of “sarai”.

Popular memory in these areas is completely devoid of their past, but in some places, an intriguing picture emerges, with modern structures of public utility coinciding with those from history.

Two such cases can be found in the modern residential localities of Lado Sarai and Katwariya Sarai.

The former is a congested locality – with houses concentrated in an area of around 256 sqkm – near the Qutb complex and the Mehrauli archaeological park, and thus very close to what has been time and again referred to as the “first city of Delhi”. 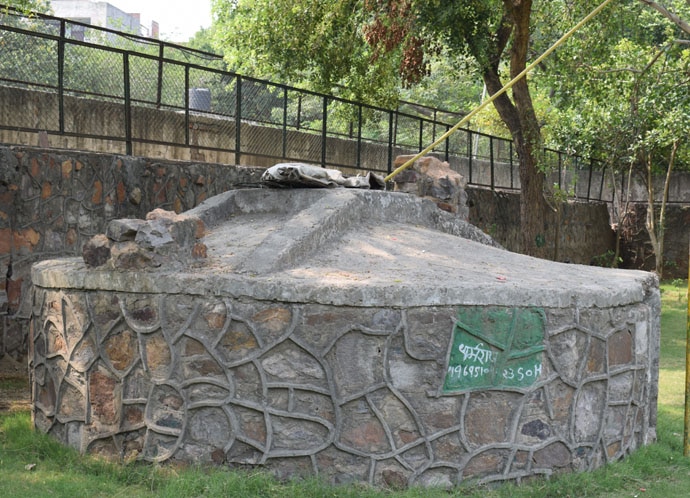 The well that survives in Gumbad Park, near the Qutb complex. (Photo: Lubna Irfan)

The closely-constructed buildings make it difficult to identify or locate any structure of the pre-modern period, but thanks to the need for some open space for recreation, and some consciousness of the historic past, a Lodi period tomb, the remnants of the western wall of what looks like a qanati masjid, and a filled-in well have survived.

These structures are located in a public park known as the Gumbad Park, which is easily accessible from the Mehrauli Badarpur road, and is a peaceful place dotted with swings for children.

The tomb itself, known as Gumbad (meaning dome), has now no remains of the grave or the gravestone, and seems to be a resting place for homeless wanderers. The wall of the mosque will soon be overtaken by the tree growing within its foundation, and the well seems to have been built over. The architecture of the mosque suggests that it predates the Lodi period, with some Tughlaq features. (Photo: Lubna Irfan)

Despite this, the spirit of the nature of public use, which must have been present in the sarais, lives on. The mosque and the well seem to have been part of the original sarai complex. It is an established fact that the sarais usually housed a mosque, a well, and at times a “hammam” (public bath house).

The architectural style of the mosque suggests that it belongs to an earlier period than the tomb, with an apparent slope in the wall – a Tughlaq architectural feature – visible in its surviving remains. The tomb seems to have been a later addition, with very clear Lodi period motifs, similar to the ones found at the Lodi garden tombs, the Jamali Kamali mosque and tomb, and other Lodi period structures.

Not very far from here is another locality called Katwariya Sarai. This is even more claustrophobic – the lanes are wide enough for a thin man to pass through, and every nook and corner is filled with fruit juice and fast food joints. Yet, wandering for a while will eventually lead one out into an open space, which now is a public parking area. Towards the east of the parking space survives a grand domed gateway, called Gumbad, which seems to belong to the Sultanate period.

The gateway has been assessed, wrongly, by the officials of the Archaeology Department of Delhi to be a tomb. The architecture of the structure, with two open sides, platforms within, and the nature of openings in the eastern and western walls suggest its utility as a gateway. 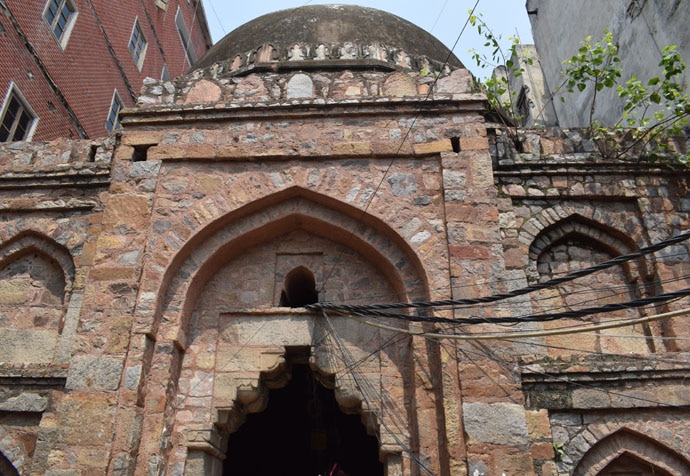 This is possibly the gateway to the medieval inn that gives Katwariya Sarai its name. (Photo: Lubna Irfan)

It can be safely argued that this structure might have been the gateway of the sarai that must have flourished in this area, giving it its present name. Here too, the parking lot and the numerous shops lining the gateway seem to have kept alive the public nature of this area.

Spaces of public use are an important element in the organisation of any society. The modern world has a different consciousness and the nature of the people as sovereign has, at least theoretically, empowered the public. Yet, the importance of appeasing the people wasn’t an alien concept even in autocratic regimes.

This reality is greatly reflected in the numerous remains of structures of public utility from the pre-modern era that have survived in the present times. These buildings were not monuments, and hence not much emphasis must have been given to their preservation and sustenance. The fact that some have still managed to survive points to the abundance of such structures in those times. 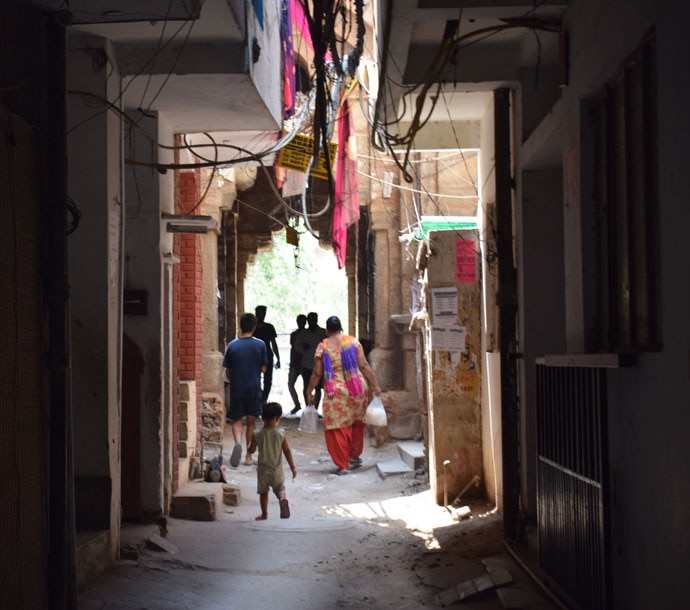 Centuries have passed, but the spirit of the nature of public use in this lane lives on. (Photo: Lubna Irfan)

Also, the very survival of the term “sarai” shows that the memory of place names comments on the historic nature of the places, as has been argued by many authors, including Bashiruddin Hasan, who has extensively surveyed Delhi.

The long-drawn comment on the survival of the spirit of public places in modern-day spaces of public use is merely an attempt at looking at the past as not something dead, but as something that lives among us and shapes the present.

The presence of juice and chat vendors along the lanes of these localities reminded me of the markets that would be organised at a medieval sarai. And as I sat beneath a tree at Gumbad Park, observing a group of middle-aged men animatedly discussing what sounded like the 2019 elections, I was reminded of a particular reference to sarai spaces made by a contemporary observer, who writes that sarais were also spaces where men would gather and chat over a cup of tea, and, more often than not, discuss religious and political issues.