Why Delhi has 14 cities and a cursed Sultan

Today Delhi NCR covers a vast area and is probably the most famous and widely written-about region. But few realise that this region covering India's capital has a very interesting history of cities within cities and was a relatively late starter.

Though Indraprastha, which is said to have been located in the present-day Purana Qila area of Delhi, is mentioned in the Mahabharata, to date, excavation expeditions have been trying to find concrete proof that it indeed existed there. 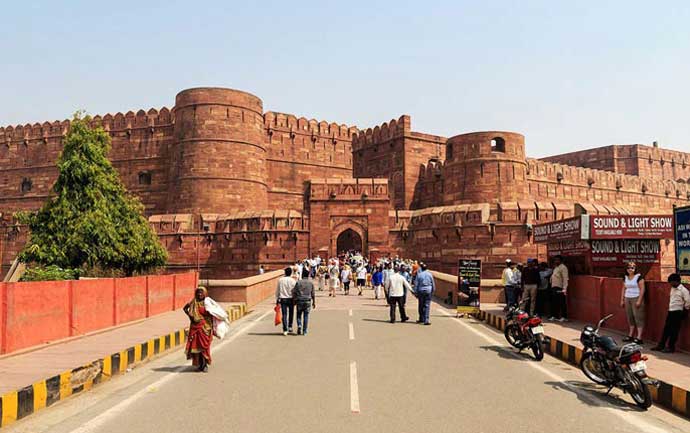 When Buddhist monks travelled to India, they visited Mathura but not Delhi even though we find a minor Ashoka edict near present-day East of Kailash in South Delhi. Its first documented mention appears in 300 CE after which there’s no mention till the advent of the Tomar dynasty.

Of one too many dynasts

It is well known that many dynasties ruled Delhi and most built their own capital cities.

An old adage says that cities were built in this part of North India because of its "Dariya", "Baadal" and "Haakim" (rivers, rain-bearing clouds and a ruler who is willing and able).

This was also the case with Delhi. Though the popular version is that there are seven cities in Delhi, the truth is there were in fact 14. Seven is the number of the extant cities — Lal Kot, Siri, Tughlaqabad, Jahanpanah, Firozabad, Dinpanah and Shahjahanabad.

Lutyens’ Delhi is the eighth and final city.

Sometimes it was the hills, sometimes the need to repel the Mongols or just the need for water that led to Delhi being built as many as 14 times over till 1947 but the popular notion — and perhaps even a romantic one — suggests the capital took shape seven times because only that many number of cities are still extant.

Here’s a walk down the fourteen cities which once made up Delhi:

Generally counted as the capital’s first city, Indraprastha is said to have been located in Purana Qila — as mentioned in the introduction. 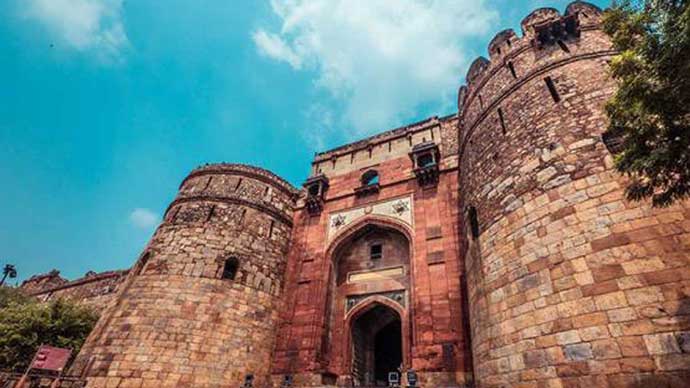 Did Indraprastha lie where Purana Qila stands today? We don't know for sure. Photo: Screengrab

A village named Indrapat existed here till the early 20th century. There has been no concrete proof to support this and excavations continue to be carried out.

Delu Delu was a small town said to have been established in 50 BC by Swarup Dutt, the governor of Raja Delu of Kannauj after whom it was named. But there isn’t much documentation to locate it.

The Tomar kings established Lal Kot in the eighth century. They chose the defensive position of the Aravalli hills in present-day Mehrauli. Ruins from their time can be found in Sanjay Van and Qutub Golf Course.

Stretching from Lado Sarai to Mehrauli, this is the first city for which there exists proper documentation. Founded by Raja Anangpal Tomar in 736 CE, it was called Lal Kot and this area was later expanded and renamed Qila Rai Pithaura after its famous ruler Raja Prithviraj Chauhan (1169–1191 CE). This was such a strategic position that the Turks who defeated Prithviraj Chauhan in 1192 in the battle of Tarain continued to rule from here.

Founded in 1288 CE by Sultan Kaikobad, the grandson of Ghiyas ud din Balban, this city was built near the present-day Maharani Bagh. Later, Sultan Jalaluddin Khilji (1290–1296 CE) also shifted his capital here as he didn’t entirely trust the people of then Old Delhi (Mehrauli) and thus it was given the name “Shahr-e-Nau” (New City).

5. Siri or the Darul khilafat

Alauddin Khilji (1296–1316 CE) expanded this city when the Mongols were knocking on Delhi’s doors. Not many of us walking down the lanes of the fashionable Hauz Khas village realise we are in Delhi's second major city when we visit the boutiques and restaurants there. He built this city between 1297 and 1307 CE to defend his kingdom against the Mongol invasions. 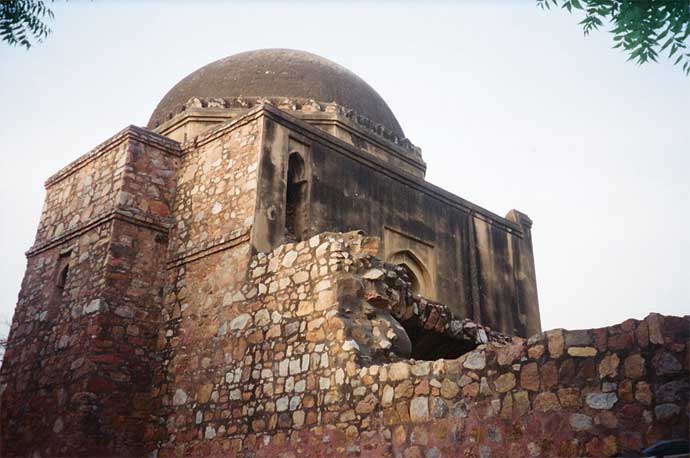 Initially, this was called lashkar (military camp) and Mehrauli was the shahr (city), but later it became the Dar-ul-Khilafat — the capital. Its present-day location includes Shahpur Jat, Hauz Khas, Siri Fort and Green Park. However, the main residence for Sultan Alauddin Khilji apparently remained the shahr or Qila Rai Pithaura/Mehrauli.

The Tughlaq dynasty that succeeded the Khiljis gave us the next three major cities of Delhi — Tughlaqabad, Jahanpanah and Firozabad.Sultan Ghiyasuddin Tughlaq Shah (1321–1325 CE) built Tughlaqabad in 1321. According to a legend regarding its desolation, it is believed that Delhi’s beloved Sufi saint Hazrat Nizamuddin Auliya cursed this city.

A popular version suggests that Tughlaq was building the fort at the same time as Hazrat Nizamuddin Auliya was constructing a baoli in his dargah and since the labourers preferred to work for the saint, the sultan ordered everyone to work only at the fort. The labourers would not let the saint down, so they went to work at the baoli site at night. When the sultan found them dozing during the day, he forbade the sale of oil and Hazrat Roshan Chirag-e-Dilli — a disciple of Hazrat Nizamuddin Auliya — performed a miracle at his spiritual master’s bidding so that the water filled in the lamps at the baoli site turned into oil. 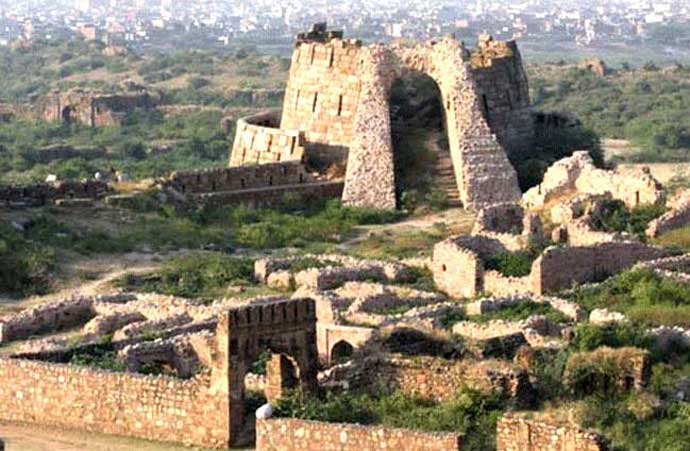 That is when the saint cursed the fort: “A rahe ujar, yaa base gujjar (May it remain desolate and unoccupied, or inhabited only by herdsmen).”

Syed Farid Nizami, the sajjadanashin (administrator) of Hazrat Nizamuddin dargah told me that the real reson for the curse was that the chief Qazi (judge) of the ruler had once summoned the saint to his court on the accusation of listening to music.

Sema mehfils had always been an important part of Chishti dargahs. The saint presented a hadith of Prophet Muhammad (Sahih al Bukhari 907) where he (pbuh) permits his wife Ayesha to listen to music — with instruments being played at a wedding on the occasion of Eid. 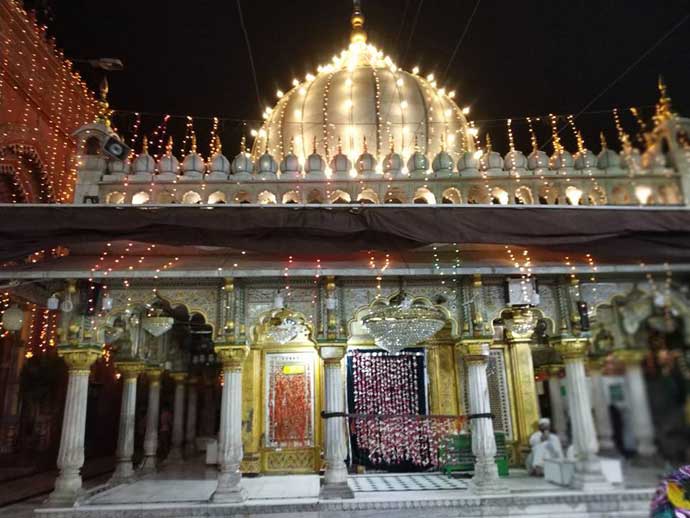 The Qazi was annoyed at having his argument proven wrong, as he had wanted music banned. He got up and told Nizamuddin Auliya to give him some evidence that Imam Hanafi, the founder of the Sunni Hanafi school of fiqh or jurisprudence, has sanctioned music as they were his followers.

Upon hearing this, Hazrat Nizamuddin Auliya rose from his seat, saying that he didn’t want to participate in an assembly where the Prophet’s hadith was not accepted as final proof — and cursed the fort.

Whenever I visit Tughlaqabad, its desolation hits me, as do the legends behind the curse.

Adilabad Fort was built by “Mohammad bin Tughlaq" next to Tughlaqabad Fort and it was the location that houses the legendary “Palace of a thousand Pillars” or “Qasrr-i-Hazaar-Satun”. This is different from the “imarat-e-hazaar-sutun”, which is in Jahanpanah's Bijai Mandal.

Since Muhammad Adil Shah was a very unjust king, he is very rarely referred to by his name and has gone down in history as “Mohammad bin Tughlaq”. His fort, too, lies desolate and is rarely visited by tourists as it is considered unsafe.

I often go to Select City Walk Mall in south Delhi’s Saket and wonder what it must have been like earlier. For it is here that Mohammad bin Tughlaq built a city in the empty area near Mehrauli, Siri and Tughlaqabad.

His intention was to enclose the area from Qutub Delhi to Siri within its walls — he chose to name it “Jahanpanah”, the refuge of the world.

The famous Begumpur Mosque and Bijai Mandal are part of this city.

Today, most people know Firoz Shah Kotla as a stadium, but it is named after a citadel in Delhi's fifth major city and the first to be built on the banks of a river. Turkman Gate: A gateway to another time. Photo: Mail Today

At the time, it extended to the north from the ridge and to the south from a point near Hauz Khas and included certain areas which are part of present-day Old Delhi, namely the Turkman Gate, Bhojala Pahari and Bulbuli Khana. 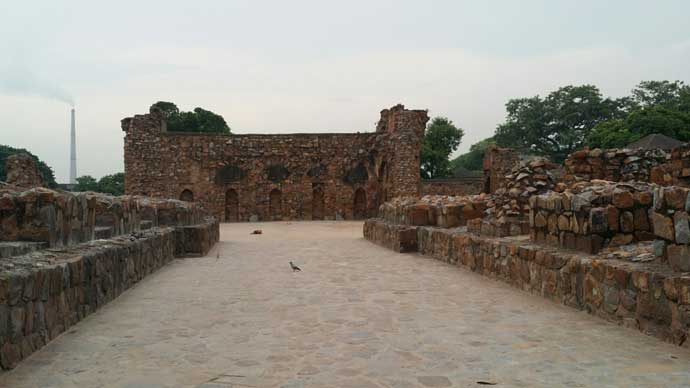 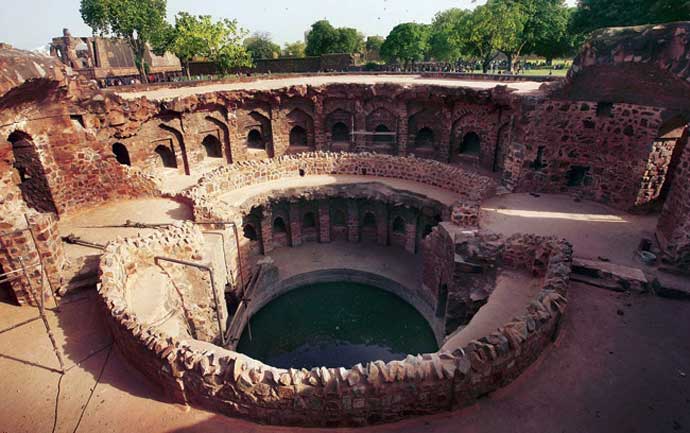 Today, however, the city is limited to the area of Firoz Shah Kotla.

The Kotla, or citadel, also contains the famous pillar of Ashoka known as Ashoka’s laat, which Firoz Shah brought from Tobra near present-day Ambala. Today, this pillar is said to be the abode of the chief of the djinns who are said to be residing in the Kotla.

I often visit Kotla on Thursdays, when devotees come to pray to or fulfil pledges made to the djinns. A heady aroma of incense and rose petals engulfs the senses as dark corners of the fort are lit up with lamps and petitions made to the spirits. This city was stripped when Shahjahanabad was being built.

Sultan Khizr Khan (1414–1421CE) built this city on the banks of the Yamuna (near modern-day New Friends Colony) in 1415. He was the founder of the Saiyyed Dynasty. Almost no trace remains of it.

This city lies near Delhi’s South Extension area and was built by Sultan Mubarak Shah (AD 1421–1434). Though there is still an area called Kotla Mubarakpur, no traces of the fort or the old city remain. 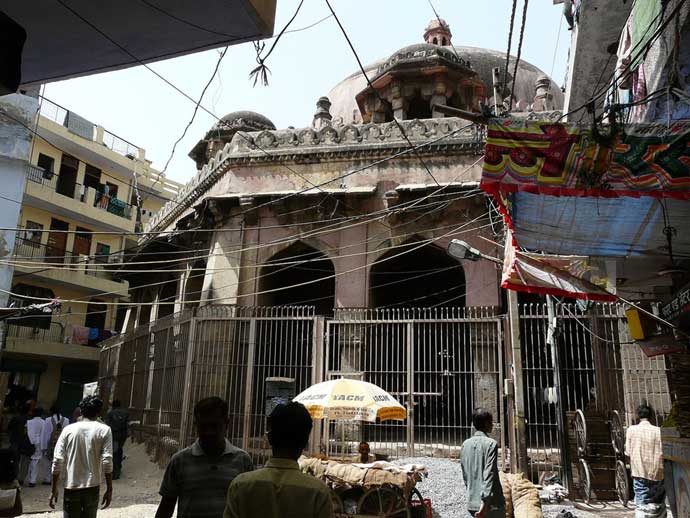 The tomb of Mubarak Shah is surrounded by houses and one can just see remnants of a gateway at its entrance. Today, the area is just a warren of buildings.

11. Dinpanah (Refuge of the Faithful)

After the battle of Panipat, Mughal emperor Babur moved around in the course of his many campaigns, living in elaborate tents or buildings from earlier eras and it was left to his son Humayun to build the first Mughal fort in India. Established in 1534 by Humayun, this became the sixth major city when he decided to set up Delhi as his capital. It included the area around Purana Qila and extended till Humayun’s Tomb. Its walls are iconic and we pass by them ever so often when we go in and around Delhi.

Dilli Sher Shahi was the name given by Sultan Sher Shah Suri to the seat of his government after he defeated emperor Humayun. He renamed the area marked as Dinpanah to Shergarh and expanded it. It extended from Purana Qila to Firoz Shah Kotla.

The famous Khooni Darwaza near Firoz Shah Kotla was part of this city.

It was Humayun's great great-grandson Shah Jahan who gave Delhi its most magnificent city. Every time I go to Old Delhi, I reflect on the glory of this magnificent walled city which began to take shape in 1639 on the banks of the Yamuna, was completed in 1648 and named Shahjahanabad.

Today, Purani Dilli or Old Delhi is a skeleton of its former self. As I try to jostle and elbow my way through the teeming crowds who come to shop here, I think of Princess Jahanara, the daughter of Shah Jahan who built a beautiful market here and named it “Chandni Chowk” or Moonlit Square. It is a bustling commercial centre, overflowing with people, handcarts, rickshaws and cars.

There is something about Delhi that fascinates me, which keeps tugging at my heartstrings and telling me its stories. Asking me to retell its story to those who may not have heard the stones crying out to be loved.

Lutyens’ Delhi was conceived and developed by the British between 1912 and 1931 and named after its architect Sir Edwin Lutyens. Today, this area is known as New Delhi. There are so many secrets and stories hiding in Delhi’s heart — a composite culture of thousands of years thriving in India’s glorious capital.