Why I strongly recommend you watch Holding the Man

A tale about love, homosexuality and AIDS like no other is now available on Netflix.

Timothy Conigrave was an Australian actor who finished writing the autobiographical Holding the Man days before his death in 1994 from AIDS-related illnesses. The book charted his life with John Caleo, a fellow student at the college Conigrave attended. The couple was together for 15 years before Caleo died of AIDS-related complications in 1992.

In 2015, a film based on Conigrave’s book was released in Australia, and it is now available for viewing on Netflix.

The loss of a large number of gay men to AIDS in the ‘80s and ‘90s has been captured in several books, films and television series, notably Philadephia and Angels in America. The tone and tenor of these works is somber, emphasising the courage shown by victims of the plague in the face of grievous physical and emotional harm.

Holding the Man too is drenched in the sadness that attends cinematic portrayals of the wounds AIDS inflicted on a beleaguered community. Yet, its canvas is larger.

The first half of the film chronicles the rousing love between Conigrave and Caleo, played by Ryan Corr and Craig Stott, respectively. In the course of the film, the lovers transition from their teens to their early 30s, and both Corr and Stott bring out this transformation ably, especially Stott whose final scenes have him portray the ravages of AIDS.

Caleo was on the football team in college while Conigrave was part of the drama troupe. These early scenes are filled with the vigour and vitality of two young men who only had eyes for one another.

The troubles that gay men commonly face – the difficulties of coming out, the impossibility of announcing one’s love, the reception of the family – are mere background noise here. It’s not like these issues didn’t exist for the duo – Caleo’s father, for example, refused to accept their relationship – but the narrative chooses to overlook these essential gay rites of passage in favour of the serendipitous coming together of two men who fell in love.

This gives the film an optimism that makes its second half all the more shattering. In one harrowing scene, Conigrave, much before he discovers his own HIV-positive status, meets an AIDS sufferer to get material for a play he is working on. 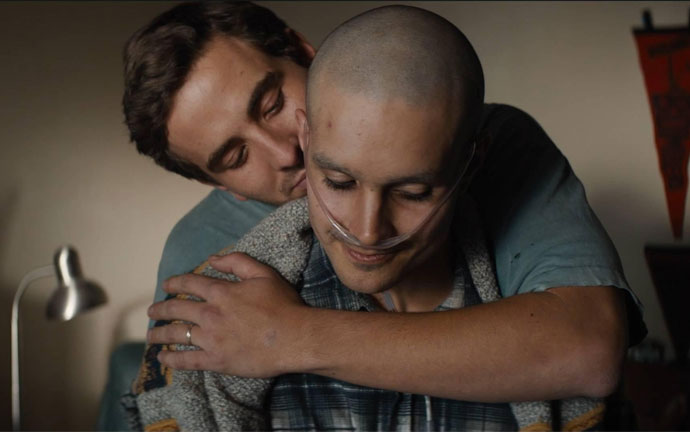 Holding the Man is drenched in the sadness that attends cinematic portrayals of the wounds AIDS inflicted on a beleaguered community.

The slim, beautiful man has bruises on his face and hands (a common feature of AIDS) but is otherwise in good spirits. Conigrave tells him he wants to interview him because he feels the issue has been hijacked by the media —“all this sex, death, horror shit”. Richard, the interviewee, says he is “33 and have decided that I am going to make it to 34”. Even when he is articulate, he is not entirely coherent – he talks about being in the Congo and seeing a leopard about to give birth.

Later, during the staging of the play, we are told that Richard had been diagnosed with toxoplasmosis, a disease of the brain that can play havoc with thought and speech. We are also told that Richard passed away, implying that he could not keep the promise he had made to himself. It is a classic AIDS scene, wrapped in the nostalgia for a person and time no longer around, yet gravid with the accompanying sadness.

Yet, it is also a subversive scene. The “sex, death, horror shit” that Conigrave casually refers to during his interview with Richard is how AIDS was portrayed in the media, at least in the initial days, when the Ronald Regan administration turned a blind eye to a tragedy that had yet to engulf mainstream America.

The resultant politics within the gay community was, therefore, anarchic, demanding that gays assert themselves and their lifestyle. The in-your-faced-ness of the gay rights movement is partly a legacy of that time, as many gay men saw their friends and lovers drop dead due to the apathy of the straights.

Be it quiet dramas like Longtime Companion or more assertive narratives like The Normal Heart, the AIDS film has studiously focused an eye on the rottenness of the prevailing political and social climate that let so many men (and initially, it was mostly men) succumb to the plague. But it is the other aspect of the AIDS film – its historical rendition of gay men’s experience as they faced of a death sentence tailor-made to instil fear in the heart – that has bestowed a nimbus of grace to the genre.

On the one hand, there is the slow-burning realisation of one’s difference and an acknowledgement of the paths available to elide this difference. Sex can, ironically, be both an escape and a sanctum, and dealing with its intimacy, its fluidity serves an august lesson. The dominant narrative – of freeing oneself in the confines of sex – reinforces the idea of locating one’s humanity in the other’s body.

AIDS put paid to all that. In another recent film, Theo and Hugo, the titular characters meet in a Paris sex club. The film begins with an explicit sex scene between them and follows that up with a budding friendship and romance between the couple.

The sex scene is both beautiful and worrying—not because the viewer is concerned about the health of the couple (though that can be a factor) but because the unthinking freedom of anonymous sex engenders a deep fear of the dissipation of beauty and personhood into a bag of scars and lesions.

Holding the Man emphasises this dissonance. Both Conigrave and Caleo learnt of their HIV status in 1985 and for some time, they believed it was Caleo who had infected Conigrave. But a later discovery revealed that Conigrave may have been positive since at least 1981 and that it was he who infected Caleo.

If this were another AIDS film, this discovery would have been put to rest, a niggling detail that would not be permitted to disturb the rich, all-encompassing sadness of the impending annihilation.

Not here. In a telling scene, Conigrave is in the kitchen helping his mother with dishes for his sister’s wedding. He reveals to her that he has AIDS, and she asks him how he could have got it since “it’s just you and John, isn’t it?” He then tells her that he has been positive since ’81. “It’s like I have killed the man I love,” he says, his voice breaking.

At an earlier point in the conversation, the mother asks him if he might have got it through a “donation”, implying infected syringe use which donating blood. Conigrave asks her, “Would you prefer it that way?” The mother replies: “Did I say that? I don’t prefer any of it, thank you.”

The contrast between the political charge of this statement and the subsequent tenderness is what makes Holding the Man different from other AIDS films that have championed politics with as much, if not greater, zeal.

A traditional romance whiplashed by the spectre of disease, the film remains a tribute to the love of Timothy Conigrave and John Caleo. It tells us in the end that Conigrave wrote the book after Caleo’s death and that he passed away a week after finishing it.

Such love is its own reward, and its snuffing out is an indictment of more than the prevalent social antipathy to it. Holding the Man is a reminder that no amount of politicking and no quantum of rights will lessen the impact of the rude jolt to the soul that AIDS is.

Also read: Why I don't see myself raising a gay family in India

Post your comment
#Films, #Aids, #LGBT rights, #Holding the Man
The views and opinions expressed in this article are those of the authors and do not necessarily reflect the official policy or position of DailyO.in or the India Today Group. The writers are solely responsible for any claims arising out of the contents of this article.