The only issue of Playboy I actually owned came without a single centrespread. It was a second-hand paperback purchased years ago from a streetside stall, with a black cover adorned with the iconic logo, above which was the title: The Best of Forty Years of Short Fiction.

The names of the writers leapt out at you: Philip Roth. Nadine Gordimer. John Cheever. Joyce Carol Oates. John Updike. Gabriel Garcia Marquez. (And 35 more luminaries.) It must have been difficult to make a selection because almost from the start, the magazine had a reputation for not only the so-called bunnies, but also good writing.

Over the years, the story selection was nothing if not eclectic. In the October 1966 issue, there was a Blandings story by PG Wodehouse, First Aid for Freddie; in November 1985, there was Haruki Murakami's The Second Bakery Attack; and in June 1998, there was a story called Late Night, the first publication in a national commercial magazine of a young writer called David Foster Wallace. John Updike featured in the same issue as a nude Marilyn Monroe.

The magazine published several influential non-fiction pieces too. Norman Mailer wrote about the Ali-Foreman fight; Hunter S Thompson, about Americans fishing in the Caribbean; and Gore Vidal, about sex and politics. Not to mention interviews with figures from Miles Davis to Malcolm X to Stanley Kubrick to Steve Jobs, and famously, Martin Luther King Jr and Jimmy Carter. It was all of this that gave rise to the now-clichéd 'I read it only for the articles' witticisms.

All this must have been a source of some satisfaction to Hugh Hefner. At a 1970 reunion, he was supposed to have told the assembled models: 'Without you, I'd be the publisher of a literary magazine.'

Much of Playboy's literary reputation in more recent times was due to the stewardship of Alice Turner, who was the fiction editor for two decades, from 1980 to 2000. (She died in 2015, at 75.) Known for cultivating authors and then defending them against criticism, she had specific likes and dislikes. 'I myself have a certain weakness for fireworks, I guess,' she once said. 'Magic shows. Rabbits out of hats. I like surprises.'

However, the question that arises is: why did Hugh Hefner pay so much attention to the literary quality of the magazine? How many, after all, really did read it for the articles? Just before he founded Playboy, Hefner worked as a copywriter with Esquire, a magazine with quite a literary reputation of its own at the time, and the desire to compete with and be one up on his former employer could well have played a part. 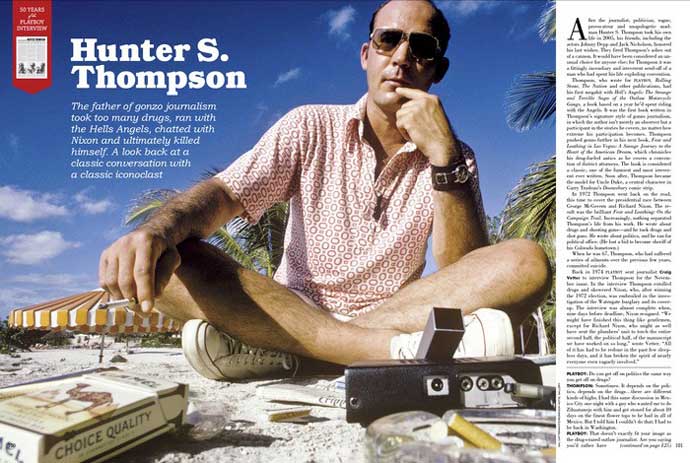 More than that, though, it's New York Times writer Amanda Hess who put her finger on it when she recently said, 'He rebranded the objectification of women as both intellectual and cute.' In other words, Hefner promoted a distorted - he would have used the word sophisticated - lifestyle, in which gazing at topless models co-existed with an appreciation of life's finer things, including good writing. In Hefner's view, this was entirely normal; in fact, something to aspire to.

This is clear from his inaugural editor's letter of December 1953, in the issue with the infamous cover of Marilyn Monroe. 'If you're a man between the ages of 18 and 80,' he wrote, 'Playboy is meant for you...We enjoy mixing up cocktails and an hors d'oeuvre or two, putting a little mood music on the phonograph and inviting in a female acquaintance for a quiet discussion on Picasso, Nietzsche, jazz, sex.'

In a year that saw the publication in America of the first English translation of Simone de Beauvoir's The Second Sex, Hefner went on to write: 'If you're somebody's sister, wife or mother-in-law and picked us up by mistake, please pass us along to the man in your life and get back to your Ladies Home Companion.'

It's just a happy side-effect, then, that this attitude led to a rich literary legacy over time. And though there were many who refused to write for Playboy, there were many others who did - including Margaret Atwood and Ursula LeGuin.

As for my copy of the pick of fiction from the first 40 years: would the person who borrowed it without letting me know please return it? Even if you took it just for the articles.

Also read: Why Hugh Hefner's legacy should not be celebrated