In search of haleem in Hyderabad and finding Yemen

When my friend and travel companion Alka Kaushik, a travel writer, and I decided to visit Hyderabad, we both did some research. Barkas was one of the places she was told to find out about. When she told me about it, I too looked it up and came across a fascinating piece of history.

Around 200 years ago, when the Nizam of Hyderabad was fighting with neighbouring provinces, he realised he needed very strong and very committed soldiers. Even though he had already entered into an agreement with the British, he recruited the Hadhrami Arabs from Yemen as part of his personal army. They were the royal guards and also called chaush. They were housed in barracks outside the walled city of Hyderabad. From what I gather, very soon, the families grew and the word “barracks” was corrupted to “Barkas”.

All this was, of course, interesting but being a foodie and passionate cook, my interest lay somewhere else and I decided to visit it. I had always wondered why it is that while we, in North India, ate khichra, which is a dish cooked with seven grains, masala and meat with a grainy texture, the Hyderabadis ate haleem.

Though the basic premise of the two is similar — that is meat cooked with grains — the taste and preparation are very different. The haleem resembles the Arab harees in appearance and, somewhat, taste. I realised I had found my answer. Indeed it was introduced by the chaush. Research confirmed my suspicion. Harees at a local restaurant.

I have lived for many years in the Middle East and am very familiar with their dress and food. When we drove into the area with friends at night, I saw the familiar thobe and checked headgear. Three children were walking down the street in their traditional dress. The youngest must have been three years old. I called out to them and talked for a bit: they told me they were returning from a jalsa.

I was, in fact, getting waves of nostalgia for Oman, where I had a wonderful three-year stay and which borders Yemen and has a big Yemeni population. In fact, just as I was looking at all the mandi shops (the traditional Arab food which comprises fine-grained basmati rice with chicken or lamb, slow-cooked in spices. It’s an Arabic version of our biryani. The most famous, Mataam al Arabi, was right in front of me. As we had just had a sumptuous dinner, I wasn’t up for it and, so, passed it. This area is very popular during Ramzan, my friends tell me. In fact, now they have mandi restaurants in other parts of Hyderabad, too, and I had seen quite a few during my drives through various parts of the city — earlier, they would come here to eat it.

The next day, I came back during the day. I met a couple of people who were of Yemeni descent but had no idea how many generations back their ancestors had come to India.

It’s most fascinating that in Barkas, the Yemenis have kept their culture and language intact.

Though they were speaking in the peculiar Hyderabadi Urdu with the typical pronunciations and inflections, they speak Arabic at home. They have zealously guarded their cultural identity, their language, dress and food.

In fact, though I haven't been to Yemen, the names of shops and restaurants reminded me of small Saudi Arabian towns. Shops selling traditional lungis and scarves were typical of that area. One of the people I met was Ali Saleh Bawazir, who was selling figs and mulberries on a cart. He was quite happy to talk to me. In fact, his cart was right in front of the original barracks, which is now a Central Reserve Police Force (CRPF) training centre.

I asked him about his food, which, as it was lunch time, was all that mattered to me then. They ate a lot of harees he said, but when I asked where I could get it, I was told it was only available in the mornings — much like Old Delhi’s Nihari.

What’s the difference between haleem and harees, I asked Ali Saleh. He gave me a very detailed recipe, which I share here:

Take twice the quantity of mutton for one portion of the habb harees or pounded wheat. Cook the meat and the habb harees wheat separately, as the two take different amounts of time for preparation. Add only ginger, garlic, cinnamon and cardamom to the meat. Mix the meat and the wheat well. If you want it richer, add to it a paste of almonds and cashews with lots of desi ghee. Lastly, garnish with fried onions. 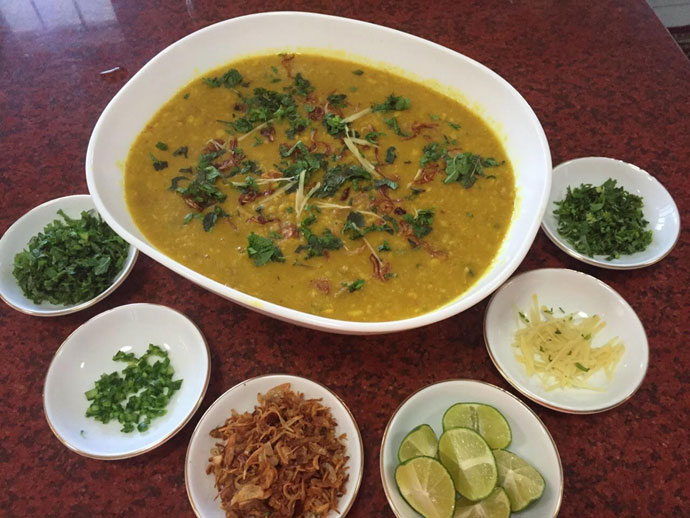 Khichra cooked in our home.

What’s the difference between this and Haleem? Saleh tells me that for haleem, one uses korma masala for the meat.Obviously, the Hyderabadis wanted it spicier. Also, it is possible they adapted their masalas to a dish they adopted.

They cook both haleem and harees at home, but Saleh prefers harees.

The chaush not only preserve their culture, they have also preserved their tribal values. When I asked him about the number of tribes who live here, he quipped: more than the hair on my head!

In fact, there are more than 200 such tribes living in barkas. They have their own mosques and madarsas, though now their children go to regular local schools.

Well, I prefer the khichra — so here’s a recipe:

1. Soak the above ingredients for two hours. Bring water to boil with the following ingredients:

Salt and red chilli to taste.

2. Add the soaked lentils and bring to a boil, stirring it continuously.

4. Add bhunna meat (recipe given below) and mix really well.

6. Fry some sliced onions in ghee.

7. Add to the Khichra. Garnish with podina, hara dhaniya, ginger and green chillies. Serve with lemons.

I would like to end with a prayer for the Yemenis who are facing extreme hardship and famine in their own country.