A non-issue such as artworks held up with the customs department at the airport becomes crucial.

The 2017 edition of India Art Fair calls itself South Asia’s leading platform for modern and contemporary art.And to make the story more complicated, the fair claims to “reflect South Asia’s immense diversity in the visual arts”.

The proclaimed relation with South Asia ought to be a muse for critical art admirers in the wake of the fair. This however requires being an irreverent observer ready to steer clear of high decibel congratulatory notes while toying with a few rhetorical questions.

Since its inception in 2008, India Art Fair has created commendable synergy among galleries and artists’ groups from the region and beyond. It serves the fundamental objective of connecting artists, markets, consumers, collectors and an inchoate mass of art lovers.

But most importantly, it plays a subtle pedagogical role in exposing art lovers to a wide range of works, which could be otherwise not accessible. By emphasising a relation with the idea of South Asia, the fair unwittingly invites critical engagement.

A non-issue such as artworks held up with the customs department at the airport becomes crucial once the fair is perceived through the prism of South Asia.

Dhaka-based artist Tayeba Begum Lipi’s magnificent works in stainless steel razor blades were not on exhibition on the day of opening. The pedestal meant to display Bangladeshi artist Mahbubur Rahman’s Lonely King had a revealing note. 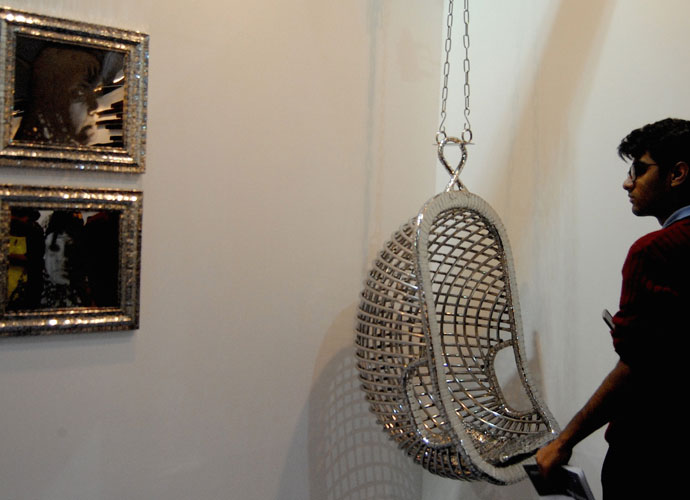 Some of these works arrived late due to delayed clearance from the customs. This is not new as Anoli Perera, an eminent artist from Sri Lanka, has faced similar difficulties in fetching artworks from Colombo in the recent past.

After all, the rules of customs often believed to be sacrosanct to the survival of the nation state’s political identity, cannot be subverted merely for art’s sake. But then, this also refers to the general lack of understanding about the regional framework, which impedes the smooth participation of artists, academics, and cultural activists in the region at cultural and intellectual forums while also denting the free circulation of their works and ideas.

Moreover, a critical browsing of the fair engenders more unrequited curiosity about the idea of South Asia. Among the three key groups from South Asia inundated by disproportionately high number of galleries and groups from India and abroad are - Britto Arts Trust from Dhaka, Theertha International Artists’ Collective from Colombo and Nepal Art Council from Kathmandu.

A collaborative art project between artists’ groups from India and Sri Lanka, titled A Tale of Two Cities, features in skeletal form in the fair. Besides a small group of artists from neighbouring countries are represented in a handful of galleries.

They are - Sri Lanka’s Koralegedara Pushpukumara and Bangladesh’s Yasmin Jahan Nupurat Exhibit 320 and Tayeba Begum Lipi in Shrine Empire. At the booth of Blueprint 12, there are works of Pala Pothupitye from Sri Lanka with Bangladesh’s Mahbubur Rahmanand and Pakistan’s Madiha Sikandar, among others.

Bani Abidi from Pakistan is in the fair without much to exhibit except her book. And a US-trained and based artist born in Pakistan named Anila Qayyum Agha is omnipresent in the fair with her work All the Flowers are For Me.

The works of these artists are scattered within the radius of about 50 metres in the otherwise sprawling space of the art fair. But, does it suffice to symbolise the cultural complexity of contemporary South Asia, which itself is a debatable idea in the wake of contemporary geopolitics?

What map of region could emerge from the selective representation in the fair? Is South Asia merely a phrase employed for business strategy and convenience? Does it subvert the dominant politics of power to be in the region? And many such questions emerge without any answers in the sight in the art fair. A side glance of Nepal Art Council.  (Photo: Dev Pathak)

Furthermore, the South Asia claim of the art fair deserved a thorough discourse despite the platitude mouthed by the organisers and visiting celebrities. The speakers’ forum appended to the art fair spent hours without hitting the nail.

None of the speakers seemed equipped to unravel the complexity underpinning the idea of South Asia. Though the first forum did mention that South Asian artists are globally networked while also rooted in South Asian consciousness. The forum needed scholars in art history, anthropology and South Asian studies to deliberate on the possible meanings of South Asia in the context of art, artists’ networks and aesthetic politics.

There is indeed no dearth of scholars from across the region that engage with art in proposing arguments on the idea of South Asia. One can quickly think of scholars from the region such as Rustom Bharucha, Sasanka Perera, Jagath Weerasinghe, Parul Dave Mukherji, Salima Hashmi among many others.

Besides, there was the possibility of curating a conversation among artists from across South Asia in the speakers’ forum. This could have added width to the comprehension of what these phrases could mean for the artists. Without this informed and layered discourse the fair concealed the integral politics of art, curating, exhibition and fair.

South Asia was largely a usage for commerce, rather than for cultural politics. Reduced into a rhetorical phrase thus, South Asian consciousness could not relate to the artworks on exhibit.

Connecting artworks of the artists from Sri Lanka, Bangladesh, Nepal, Pakistan with their Indian counterparts could have anchored the art lovers to understand that South Asia is not merely a prerogative of nations, diplomats, and bureaucrats.

This fair could have generated the possibility of rethinking South Asia with reference to themes and aesthetic politics arising from the presence and absence of the region’s art works.

Post your comment
#Pakistan, #South Asia, #India Art Fair 2017
The views and opinions expressed in this article are those of the authors and do not necessarily reflect the official policy or position of DailyO.in or the India Today Group. The writers are solely responsible for any claims arising out of the contents of this article.