Remembering Jagjit Singh: The singer who made ghazals accessible to everyone

There are singers and then there is Jagjit Singh, who remained a perfectionist till his untimely death on October 10, 2011.

I saw his work ethic up close. My maternal uncle, Late Satish Bhatia, retired chief producer (Light Music), All India Radio, Delhi, and music director, had composed the music of a TV serial called Apna Apna Aasmaan which was to air on Doordarshan in 1992. The singer, who was to record the title song, flew in from Mumbai and reached the recording studio in Daryaganj, Delhi at 11 in the morning. The track was ready.

He needed to learn the melody and record. It would not have taken much time for a professional like him. But no! He had not done his daily riyaaz because of the early morning flight and would first need to do that. No question of singing or even listening to the composition before that. So, there he sat – inside the studio with the studio harmonium – and began. For three hours he practised, eyes closed, completely focused, oblivious to the people outside who he could have seen through the glass partition had he wanted to. It was a spiritual experience to see and hear him. I wish the whole session had been recorded.

Riyaaz was over by 2:30 in the afternoon. “Lunch?” he was asked. “After the recording,” he said. He listened to the tune, read the lyrics and began practising. He was ready by 3:30 p.m. The recording began. There were some retakes – some at my uncle’s bidding, some on the singer's insistence even though my uncle felt the part was fine. And by 5 p.m., the title song in different variants was ready. The producer was ecstatic, my uncle was highly satisfied, and the singer was very happy with the final product. "Let us have that lunch now," he declared. Mughlai food from Jama Masjid was served. And then the producer dropped him off to the airport in his car. My transfer orders to Mumbai had just been issued a few days earlier. He said he looked forward to meeting me during my stint there.

If you miss one day’s riyaaz, only the singer can notice the difference, not the public. But this was no ordinary singer. 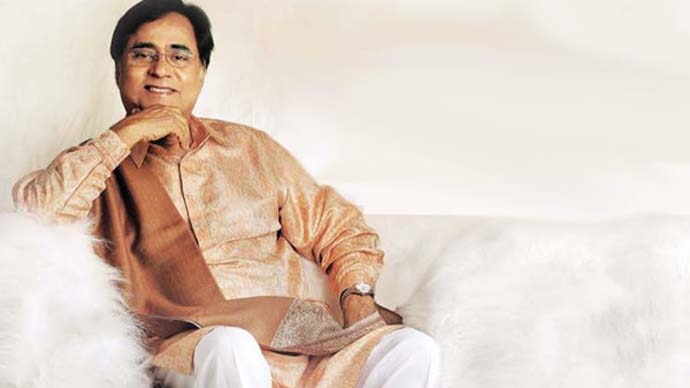 The ghazal in India remained cloistered in the rarefied closed confines of the cognoscenti. It remained beyond the reach of the people. Its language, its gayaki, its intellectual content, its classical moorings, it’s very persona made it unattainable to the non-members of the exclusive club. Hindi film music, especially the ghazals of Madan Mohan, exposed the common listener to this fascinating world. But these were few and far between whetting the appetite of a burgeoning educated middle class wringing their hands in despair at their difficulty in negotiating a Begum Akhtar. The landscape was ripe when Jagjit Singh released his The Unforgettable in 1977.

The ghazals and the nazms were easy to understand, the style of singing was simple, the instrumentation (including a guitar — “Blasphemous,” cried the puritans!) gave a modern feel, the length was equivalent to the average attention span, the voice was rich and pure, and there were duets too (in ghazals? Really!) with his wife Chitra whose skill levels and voice quality were different, making the pairing incredible. The sequestration was over, the rigidity was unshackled, the genre could finally come out to gulp fresh air. The record was a colossal hit. You and I know every song in it.

In terms of literature, Jagjit Singh had condensed a Stephen King story in the Reader’s Digest. Made it accessible to the public without compromising its integrity or thematic basis. Yet he ensured that he did not pedestrianise it and turn it into pulp fiction. That would be left to other ghazal singers who would follow him. So, while he sang “Thukraao Ki Ab Pyar Karo, Main Nashe Mein Hoon, Jo Chahe Mere Yaar Karo, Main Nashe Mein Hun”, he took care not to cross the line and sing “Huyi Mehengi Bahut Hi Sharaab Ke Thodi Thodi Piya Karo.”

From the High Road, he brought the genre to the Middle Road, avoiding any drift further down. The Middle Road had various shades – romantic, introspective, philosophical, agony, ecstasy, joyful and tearful. Lyrics were in everyday words. Tunes that you and I could hum and never forget. And best of all, one could play and sing them in get-togethers, breaking the hold of Hindi film music on our musical entertainment. This transformation did not turn the ghazal into flippant music. Instead, it democratised it. So, while Begum Akhtar and her ilk still had a fan following, these were mere islands in the ocean that Jagjit Singh began ruling over.

Jagjit Singh’s songs made a place in the listeners’ hearts. His endearingly familiar honeyed voice intertwining so beautifully in their lives, a seamless part of their joys and sorrows. He laid a lot of emphasis on simplicity and clarity. Whether it was a bhajan, a folk song, a ghazal or a film song, Jagjit Singh cast a hypnotic spell because he sang from the heart. Simple tunes with no gimmickry. His charismatic voice would be a balm over wounded sensibilities.

Not only was Jagjit Singh a great artiste, but was also known for his kindness and generosity to the poets whose songs he sang. He would acknowledge their contribution in concerts and share his success with them.

At the pinnacle of his life and success, Jagjit Singh lost his only son Vivek in a tragic road accident. Shattered beyond measure, he did not sing for six months after that. Then turned to his tanpura for solace. Music became an instrument to heal and to come to terms with the tragedy. He began to exhibit his spiritual and philosophical side and mellowed his already sobering voice and began venturing into bhajans.

Though he did sing the most memorable songs in films, they were limited in number. And rightly so. The musicality of his voice, the pain and depth embedded in it would not have lent itself to a hero running around trees. Playback singing at a commercial level would have destroyed Jagjit Singh as we knew him. We are glad he stayed this side of the fence and went across only occasionally when the script demanded it and enriched films such as Saath Saath and Arth.

There was a difference between Jagjit Singh the recording artist, and Jagjit Singh the performer. The song on the disc has its constraints. It is limited by time, it is straight and narrow, it is tight in its structure and presentation, it is formal and wears a tie. But on stage, the song becomes something else. The innovations, the embellishments, the spontaneity, the flexibility, the connect to the audience — feeding into and feeding off the adulation — moving into the unexplored musical territory and finding the way back, the uninhibited rendition make the experience like no other. Jagjit was a master performer. His audience never felt let down. Sometimes he would even change the melody, say of an antara which the commercial considerations of the disc may not have permitted. I heard his live recording of Sadma Toh Hai Mujhe Bhi at a concert in Hong Kong. The song was sung at a leisurely pace and the antara was changed. The effect on the audience was electric. His extended exposition of it was something one experiences but rarely. Unfortunately, most recordings of his live shows were done privately. Once in a while when one hears them, one marvels at the way he experimented with songs while retaining its essential melody already seared into our hearts and minds.

Of course, Jagjit Singh as not alone. His wife Chitra played a vital role in the success of the duo. Audiences doted on their contrasting characteristics — his heavy bass voice in contrast to her trill tone, his gregarious personality versus her quiet demeanour, his Punjabi charm complementing her classic Bengali beauty. After the death of their son, she stopped singing altogether. 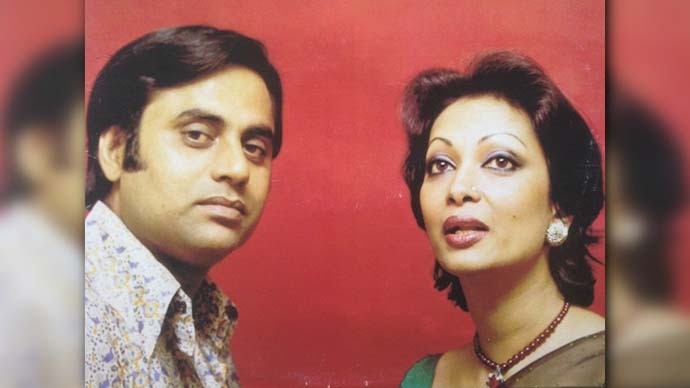 I have attended numerous Jagjit Singh concerts. Of those, two stand out. One was in Mumbai where he sang while MF Hussain painted alongside. The song was an extended ghazal, and Jagjit Singh, unperturbed by the going on alongside him, sang in the only way he could – soulful, melodious, embellishments at the right places, no musical jugglery (as Ghulam Ali would do), straight from the heart. MF Hussain began interpreting the ghazal on a huge rectangular whiteboard with a blue marker. This was not a collision of two art forms, but a collusion of masters in depicting the feelings of the poet by way of song and painting. The painting was auctioned after the program to the highest bidder from the audience.

The other was his Ghazal Symphony held at Leisure Valley Park (open-air) in Gurgaon in 2011. Besides his core musicians, a symphony orchestra of 30 musicians backed him. This was a novel concept. And yes, the twain did meet, and how! There was a richness and depth added to the performance and added a hitherto unknown dimension to ghazal rendition.

All his albums are outstanding. One album that stands out for me is Shiv Kumar Batalvi – Birha Da Sultan. It is an extraordinarily soft and heartfelt collection of Batalvi’s poems. Some poems can only be conveyed by singers chosen by God. These poems only reach their fullness through the vocal cords of such chosen singers. If you have not heard the album, I urge you to listen to it. It is in Punjabi but that does not matter. It goes beyond music – it is divinity.

Till his untimely death, Jagjit remained a perfectionist. He firmly believed that every morning was a new beginning, every album was a new album, and every concert was a new test. Everything could be done better, so try it.

Born Jagmohan Singh Dhiman in Rajasthan’s Ganganagar to a Sikh family, Jagjit Singh who was a Grade-B artist in AIR, Jalandhar (he would do live concerts for them six times a year), would have scarcely known that one day every radio station, every recording company and every music lover would rate him beyond grades, above superlatives and that his legacy will live on forever.