Why we still read Jean-Paul Sartre

Born today, the existentialist writer, through his life, ideas and literature, illumined the reading public of his day, and continues to do so.

“Man was born free,” wrote Genevan philosopher Jean-Jacques Rousseau, “and he is everywhere in chains.” The notion of freedom and its importance in man’s life is at the heart of Jean-Paul Sartre’s all philosophical thoughts. He, however, slightly differed from Rousseau’s point of view. He believed that man is free by his own choice and while practising his freedom, he is bound to violate the liberty of others.

In one of his lectures, Existentialism and Humanism, Sartre, the existentialist, postulates that as men must “will freedom for freedom’s sake,” they must also, “will freedom for all”. But later he dismissed this idea as “a mistake” and moved towards what he called “existentialised Marxism” or in the words of his lifelong companion, Simone de Beauvoir, “he chose the USSR”.

According to de Beauvoir’s The Prime of Life, he, however, later became the most bitter critic of Joseph Stalin and the USSR for allowing Adolf Hitler to rampage through Europe. She notes in her memoirs, when the news of Germany’s attack on Europe and Stalin taking its side emerged, Sartre told her that in his third volume of Roads to Freedom, “Brunet, disgusted by the German-Soviet pact would resign from the Communist Party and go to seek help from Mathieu: an essential reversal, he said, of the situation described in the first volume”. Some of the positions Sartre takes in What is Literature? are dubious. Photo: The Hindu

From giving a new meaning to existentialism of 17th century to renewing Marxism by giving it a philosophical foundation not in materialism but in existentialism, Sartre was no doubt the avant-garde French thinker of his time.

Born in Paris on June 21, 1905, Sartre taught at various schools in the city. He left the teaching profession to work for the magazine Les Temps Modernes. His experiences helped him profoundly in understanding the ironies of life. There is little doubt in my mind that if he ever had religious sentiments, in all likelihood they must have been inclined towards those of Thomas Hardy, who saw religion as a providence that decrees the wicked to be sheltered and the innocent to be punished.

Sartre sheds light on his early views on religion in Words, where he presents reminiscences of his illusion-ridden childhood in a witty and lucid account. He writes: “Religion showed through an outmoded concept of culture and served as a model: because it is childish, nothing touches a child more closely. I was taught Biblic history, the Gospel and the catechism without being given the means of believing: the result was a disorder which became my private order.”

The fascinating book — seemingly a work of one brilliant stroke — shows one of the profoundest thinkers of his time as a child and how, despite hurdles, he managed to become famous - the “homme de lettres” his grandparents wished him to be. It is evident from the autobiography that Sartre had begun searching for the meaning of life at a tender age. At the age of 10, he was already averring that “this race will have inestimable consequences” by 1945.

Sartre had written somewhere that he wrote to “seduce women”, yet his philosophy by no account can be categorised as merely a stunt nor can we call the man a charlatan. In Words, he presents a memory: how, while accompanying his grandmother to her lending library as a boy, he would watch with amusement “tall, thoughtful, unsatisfied women glide from one wall to another in search of the author who would satisfy them”. Sartre used to think they wouldn’t find one, because it was him, the “child around their skirts” — the writer that they were looking for.

And the puny idea he grew up with turned into reality. By the time he was 50, he had established his name; had become the founder of French existentialism, he was all the rage. So much so that if he ever sent a parcel from somewhere in France to his home in Paris, journalists would discover his retreat.

Once, when he went to a restaurant which he used to frequent with his grandfather as a boy for a glass of beer, he overheard his name in the tittle-tattle of some attractive, young women at the table next to his. One of them said: “Ah! He may be old, he may be ugly but what does it matter; I’d give thirty years of my life to be his wife.” Sartre would respond to the woman’s astonishment of discovering him at the next table with a “proud but sad smile” before disappearing.

From Sartre to Simone, with love.

Many readers find Sartre’s work “overcomplex” as even in his novels, philosophy overflows in the action and characters are searching for answers, often dealing with their existential crisis. For instance, Sartre’s first novel Nausea, which was an instant success and whose fame didn’t abate for a long time, shows a disillusioned historian judging himself through his life and often finding fundamental absurdity in the humdrum routines of his life.

It is easy to decipher that Sartre has passed his philosophy into the images that he presents in the novel. Albert Camus, in his review of the novel in Alger Republicain, suggested that there is an imbalance between the ideas that Sartre postulates and the images with which he has chosen to express them.

As a result, Camus claimed, the novel loses its life; the plot becomes lopsided despite the lucidity of the language and the reader finds it difficult to be one with the text. Camus, however, ended his review with praise for the writer endowed with “limitless gifts”. He wrote: “This is enough for La Nausee to be welcomed as the first cry of an original and vigorous mind whose future works and lessons we are anxious to discover.”

Though Camus is considered Sartre’s “friend and foe”, the two had much in common albeit many differences. They met in 1944 for the first time but their friendship soon turned sour. In an interview in 1945, Camus said: “Sartre and I are always astonished to see our names connected. We are even thinking of publishing an advertisement declaring that we have nothing in common and refuse to answer for the debts that the other may have incurred.” Both, however, were actively involved in the resistance during World War II. 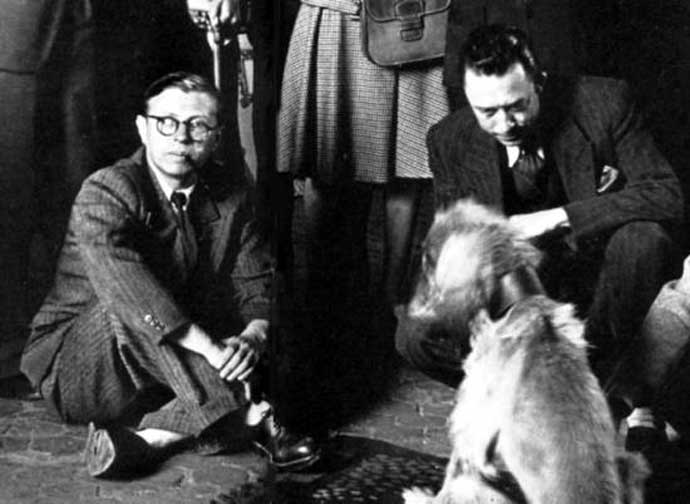 Camus was one of the closest friends of Sartre and de Beauvoir before animosity prevailed in their friendship. They believed that Camus was on the wrong side of the Algerian war, plus they had other differences too. “I think Camus was depressed,” writes de Beauvoir in her memoirs, “because he felt that his golden years were coming to an end.”

Sartre’s vitriolic attack on Camus in Situations IV suggested their relationship was no longer amiable. But, he did write a brilliant obituary after Camus’ death in a road accident — doing full justice to the great writer and thinker.

In What is Literature?, Sartre advocates for socially committed or “responsible” writing whilst defining the essence of literature and suggesting that the universes of prose and poetry are separate. He defines writing as “taking a position” and writes: “...if prose is never anything but the privileged instrument of a certain undertaking, if it is the business of poets alone to contemplate words disinterestedly, then we have the right to ask of the prose writer directly: ‘What is your aim in life? What undertaking are you engaged in, and why does it require you to use writing as a means’?”

He, in a way, was urging writers to be wary of the causes they advocate and use their skills to win over others to embrace and support such causes. Some of the positions Sartre takes in What is Literature? are dubious. For instance, his argument that poetry is separate from literature, his reduction of literature to journalism, political writing as the moral responsibility of a writer, et al seem obsolete now.

One can only understand Sartre’s stand in What is Literature? by taking into consideration the intensely political ’40s in which it was written, and his enthusiasm for a revolution in a world that was still dealing with the effects of World War II.

In fact, Words, written 15 years after What is Literature?, suggests that Sartre’s views had changed with the shift of time. He writes in Words: “I still write. What else can I do? Nulla dies sine linea. It’s a habit, and besides, it’s my profession. For a long time, I took my pen for a sword; I now know we are powerless. No matter. I write and will keep writing books; I have to; and they may serve some purpose.”

In its concluding pages, he says: “Today, in my disillusion, I still cannot envisage the cooling of the sun without fear: it matters little to me if my fellow creatures forget me the day after my burial; while they live, I shall haunt them...”

Sartre did just that. Despite all his flaws, he is considered one of the most respected, and possibly the most discussed philosophers of the 20th century, who even refused to accept the Nobel Prize in 1964 due to his morals.

A profound truth comes to mind that Arthur Rimbaud mentioned in his poetry — a literary form Sartre had called “word-thing”.

#Existential crisis, #Existentialism, #Jean-paul sartre
The views and opinions expressed in this article are those of the authors and do not necessarily reflect the official policy or position of DailyO.in or the India Today Group. The writers are solely responsible for any claims arising out of the contents of this article.