Serendipity and happenstance, like elsewhere in life, inhabit the music industry too. Who would have thought that a poem recital on a beach would lead to the formation of one of the most dark, raunchy, enigmatic yet influential bands in the history of popular music?

Two students of UCLA Film School meet at Venice Beach, California in 1965. The poet recites his lines to the other person:

Let's swim to the moon,

Let's climb through the tide,

Penetrate the evenin' that the

The listener, Ray Manzarek, a keyboardist, is awe-struck and they both join hands to form a band. They add drummer John Densmore and guitarist Robby Krieger. 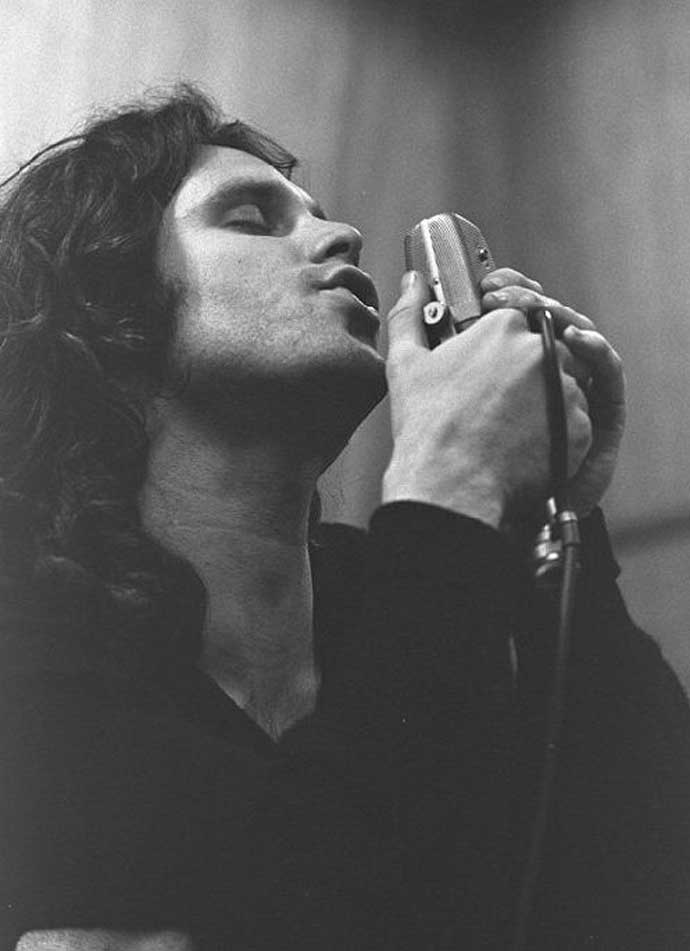 People flocked to him as if he were a prophet who would lead his people to the mystical state he spoke of in his poetry. Photo: Pinterest

The poet Jim Morrison names the group The Doors after Aldous Huxley's book The Doors of Perception.

The Doors would change the world of music. Morrison, the poet-turned-rock star would leave an indelible mark on the musical firmament. That he would die at an age of 27, 46 years ago, would add to his mystique.

Morrison was a poet. He was also a crooner. The two artists who influenced him the most were Elvis Presley and Frank Sinatra. His natural baritone captured mood, attitude and sex; it demanded to be heard. He had a dark, low voice; solid and rich, but he could ramp it up to loud earth - shattering yell. His voice could glide from whispery ("People are Strange"); to dreamy ("Riders on a Storm"); to sleazy ("LA Woman"); to a holler ("Roadhouse Blues"); to aggressive ("Break on Through"). His voice projected thrill, sensualness, and power.

No other singer except Morrison himself could do full justice to his own poems. That's why The Doors shut shop after a futile attempt at continuing for two years after Morrison's untimely, but not unexpected, death. The unique voice also got interred with Morrison. Many in his audience viewed him with a mixture of admiration and horror.

Consider the introduction of the film Apocalypse Now (1979). No piece of the soundtrack caught the overall theme of the Coppola masterpiece like The Doors "The End". The psychedelic song playing in the background to a montage of battlefields and burnt-out forests, imagined by a benumbed soldier, set the tone of the film - the confused mindset of the young man, thrust into a war against an often-invisible enemy. The opening sequence to this film gave a preview of the horrors of PTSD to audiences. And the credit largely goes to the song.

Morrison, as a frontman for the band, became one of the most controversial and intriguing rock icons ever. He became the ultimate sex symbol. His charisma drove women crazy. He was considered as Jesus without a beard. Audiences looked at him as God. So captivating were his performances. The self-styled Lizard King wore tight leather pants that emphasised his crotch for live performances. This added to the raunchiness of live performances and invited censure from older generations who were not yet acceptable of such behaviour in the 1960s.

In line with the counterculture movement of the 1960s, where subversive young people sought the perfect, free Utopia, Morrison pushed the doors of sensations and colours wide open. He shared his feelings and his journeys to the boundaries of reality in his lyrics. People flocked to him as if he were a prophet who would lead his people to the mystical state he spoke of in his poetry.

In 1947, when he was four years old, Morrison allegedly witnessed a car accident in the desert, during which a truck overturned and some Native Americans lay injured at the side of the road. Morrison believed this incident to be the most formative event of his life, and made repeated references to it in the imagery in his songs, poems, and interviews. A voracious reader from an early age, Morrison was particularly inspired by the writings of several philosophers and poets. 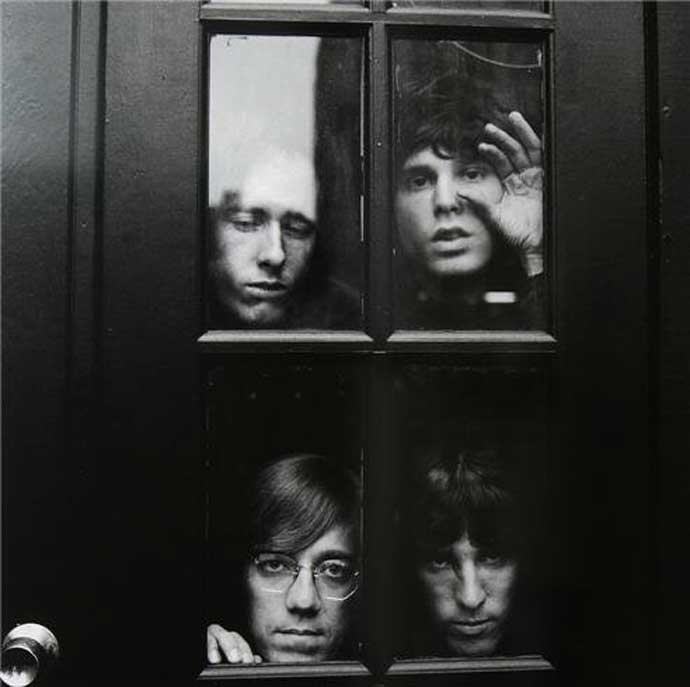 No other singer except Jim Morrison himself could do full justice to his own poems.

In my view, there was no topic so taboo that he would avoid, no act so outrageous that he would refrain from, no behaviour so destructive that he would abstain from. Morrison lived out the dramas he wrote about in his songs - extreme alcohol and drug abuse, flagrant public obscenity (exposing himself once on stage "to see what it looked like in a spotlight"). Many in his audience viewed him with a mixture of admiration and horror. They could experience vicariously his flaunting of social norms and his self-destructive behaviour, because he went where they wouldn't dare.

The Doors had a meteoric rise and a slow, painful fall. They released eight albums between 1967 and 1971 - all very successful. But things changed. Morrison - who had long been a heavy drinker - started showing up for recording sessions inebriated. He was also frequently late for live performances. By early 1969, the formerly svelte singer had gained weight, grown a beard and mustache, and had begun dressing more casually - abandoning the leather pants and Concho belts for slacks, jeans, and T-shirts.

Less than five years later, it was over. The last phase of the singer's life was spent in Paris drinking and taking smack. The end came on July 3, 1971. Morrison had spent the evening at a club called Rock n' Roll Circus (still going, as the Whiskey A Go Go) where someone gave him heroin to snort. By some accounts, Morrison died at the club, then was moved, dead, back to his apartment. Officially, he died in the bath.

He was buried in the Pére-Lachaise cemetery in Paris which contains the remains of thousands of celebrated artists, writers and musicians, including Edith Piaf, Oscar Wilde, Chopin, Proust and JRD Tata. This is a necropolis of the famous.

We visited the cemetery many years back to pay our homage to Morrison.

The inevitability of death was all-pervasive. The oppressed and their oppressors interred with the same ritual. Yet the modest tomb there and a grandiose one here still reflected the unequal riches and fame of its occupant. Inequality among the living continued even after death.

Morrison's tomb was a disappointment. Its modesty took us aback. Wedged incongruously between imposing mausoleums, the simple slab of granite did no justice to the legend that lay underneath. But the limited space was packed to capacity. Visitors of all nationalities. Hippies rolling joints against a backdrop of The Doors lyrics. A group of American youngsters, one of them wielding a guitar, was singing his songs. Rucksacks were casually strewn around. Graffiti in every language on every stone.

Flowers, many of them withered with time, were lying around. Some people were sitting in silence staring at the tombstone bearing the legend "Jim Morrison: 1943-1971". Everybody was alone with his private thoughts and yet together in his devotion to the man and his music.

These days the authorities have erected metal barricades to curb unauthorized tributes. The tombstone once featured a bust of Morrison before vandals claimed it as their own.

A new tombstone, again modest, has been installed which bears the inscription "True to Your Own Spirit" in Greek. It continues to be a shrine. The endless vigil at the grave by his fanatic fans continues.

As our visit ended, we visited the columbarium and the crematorium. A quotation above the entrance read: "Voice I' heure de nous en aller /Moi pour mourir, vous pour vivre /qui de nous a le meilleure partage? (The time has arrived for us to separate/ I to die, you to live/which of us is better off?)."

Jim Morrison, the time for you to separate from us, to die, came too soon. We, who have survived, are certainly worse off for not having you around a bit longer!

Also read: The Dylans we don't talk about

#The Doors, #Jim Morrison
The views and opinions expressed in this article are those of the authors and do not necessarily reflect the official policy or position of DailyO.in or the India Today Group. The writers are solely responsible for any claims arising out of the contents of this article.