Johnny Walker, the teetotaller-drunkard who charmed Bollywood, cannot be forgotten

In BR Chopra’s man versus machine classic, Naya Daur (1957), Dilip Kumar and Vyjayanthimala play the lead roles. A journalist, played by Badruddin Jamaluddin Kazi, comes from Bombay to their village to cover the race between a tonga and a bus – the film’s highlight.

Badruddin Jamaluddin Kazi was actually the actor’s name on his passport. But the world knew him as Johnny Walker.

The "English... Dhun Mein Hindustani Gaana" not just described that song, but two other songs as well that he will forever be known for. In a still from Aar Paar

"Ae Dil Hai Mushkil Jeena Yahaan" from C.I.D. (1956) was based on "Oh My Darling, Clementine" – the American western folk ballad. The music of OP Nayyar and the lyrics of Majrooh Sultanpuri took it to another level altogether.

"Sar Jo Tera Chakraye" from Pyaasa (1957) was the other. It was based on a song in Hugo Fregonese's British film Harry Black and the Tiger. SD Burman’s composition and Sahir Ludhianvi’s writing transformed the song into a timeless classic.

It’s very interesting how Johnny Walker entered the film industry. He was working as a BEST bus conductor in Bombay, regaling passengers with funny tales and cracking jokes while he issued them tickets.

He had an inimitable way of calling out the names of the stops. That was when he caught the eye of actor Balraj Sahni, who was travelling in a BEST bus. An amused Balraj, who was scripting the screenplay for Guru Dutt's Baazi (1951), recommended him to Dutt.

Following a successful audition with Dutt as a drunkard, Kazi was immediately taken on board for Baazi though it was nearing completion. Expectedly, the role was that of a drunkard, and Kazi was rechristened by a delighted Dutt as Johnny Walker, after Dutt’s favourite whisky.

Ironically, Kazi was an avowed teetotaller.

Johnny Walker never looked back after that. He acted in around 300 films till his last role in Kamal Haasan's Chachi 420 (1997).

Interestingly, more than 40 years earlier he had acted in Shrimati 420 (1956). His busiest period was that of the 1950s and 1960s. There was even a film named after him - Johnny Walker (1957) - in which he acted opposite Shyama. What's more, two songs carried his name – "Sach Kehta Hai Johnny Walker" from Aji Bas Shukriya (1958) sung on screen by Geeta Bali (playback Asha Bhosle); and "Main Hoon Mr Johnny" from Mai Baap (1957) sung on screen by Johnny Walker to Minoo Mumtaz (playback Mohammed Rafi).

The meaty roles that he got in the films made him a supporting actor or a "second hero" rather than, strictly speaking, a comedian. He always managed to corner attention in the roles he played, in many instances over-shadowing the main actor. Comedy was well-integrated into the story and Johnny Walker played a part that blended into the main story. In a screengrab from Paigham

He enjoyed a pride of place in the film’s screenplay and influenced the box-office figures. In many films, he shouldered more responsibility than the main hero in making them great hits.

The reasons behind his popularity were many - his unrestrained cheeriness; his unconventional face; his unique dialogue delivery; his style of flirting and teetering during his song and dance routine; his twitch of the eyebrows; his well-timed smirk; his witty remarks; his funny gestures; his thin face, pointed nose and skinny body; his peevish voice; his slurring and exaggerated diction; his goofy demeanour. I could go on and on. He had charisma written all over him. The audience loved him.

Johnny Walker had the inborn ability to come up with one-liners. He was perhaps the only comedian who had stories written keeping him in mind. And all he had to do was to appear before the camera for the chuckles to begin. But his comic act had undertones of social commentary.

Playing the simpleton, he dissipated the grave overtones in many a film, albeit driving home some profound truths.

He became so popular that a bus-stop near his house, Noor Villa, at Parry Cross Road in Bandra was called "Johnny Walker Stop". Johnny Walker would stand at the intersection of the road and wave out to his fans.

His act in Bimal Roy’s Madhumati (1958) won him the Filmfare Best Supporting Actor Award. He got his second Filmfare for Best Comedian in Shikaar (1968).

Johnny Walker became an indispensable part of Guru Dutt films and got important roles in his films. Except for Sahib, Bibi Aur Ghulam (1962), he acted in every Dutt film. He even featured in songs in all these films – in Chaudhvin Ka Chand, he sang two - "Mera Yaar Bana Hai Dulha" and "Yeh Duniya Gol Hai". Dutt had complete faith in him. He used to give Johnny Walker his scene and dialogue and if he could do better, he would accept it.

In every rehearsal, Johnny Walker would come up with something new and Dutt would love it. He used to look at everyone on the sets and see if the light boys, the cameraman, the assistants were laughing at his dialogues. Dutt then had an assistant write down whatever Walker had said in the rehearsal.

With each successive film of Dutt, Walker’s role became more substantial – from being just a sidekick to being the hero’s confidante; from being just a drunkard in Dutt’s first film to a rich person who is friends with the hero (Kaagaz Ke Phool (1959).

He left an indelible impression even in small roles like in Hrishikesh Mukherjee's Anand (1971), where he played a bearded stage director who humours the dying cancer patient Rajesh Khanna with pithy philosophies of life.

Mohammad Rafi had a huge contribution in making Walker's career successful. Most of the songs sung by Rafi for Johnny Walker were huge hits. Rafi was the only singer who could modulate his voice to match the voice of the actor.

By listening to the way Rafi sang, one could make out who was singing on the screen. Rafi imitated the dialogue delivery style of Johnny Walker perfectly and their combination yielded memorable songs. Filmmakers not only gave Johnny Walker a big slot in their films, but also gave him a song because they knew that with Rafi providing the playback the song would be a success.

How many comedians can boast of such a status?

Let’s talk about a few such songs.

· Ae Dil Hai Mushkil Jeena Yahaan, Yeh Hai Bombay Meri Jaan, C.I.D.: The song is a pessimistic commentary on the inhumanity of a large city and deals with the vagaries of urban life. Walker plays a pickpocket in the film but his philosophy about the city is profound.

The viewer is taken on a tonga ride through Bombay’s streets, along with Kumkum and Johnny Walker. The upbeat composition, Johnny Walker’s jaunty walk and inimitable grin mitigates the poignancy and brings cheer to the viewer.

The sunny song belies the dirty underbelly of the city and that’s where the genius of OP Nayyar lies – delivering a bitter pill with sugar coating.

This song has a very interesting history. Guru Dutt chanced to see a maalishwala wearing a checkered lungi, a jaunty cap, banian, and carrying bottles of oil. A role was conceived. The role required a song. Dutt had picked up some records during his visit to England. There was one tune he liked a lot from the film, Harry Black and the Tiger, which he decided to use.

SD Burman, who was composing the music for the film, was asked to copy the song note-for-note. SD was very upset. But Dutt was adamant - the tune would have to be copied in the "mukhda" at least. SD could do whatever he wanted in the "antara". SD’s genius ensured that the "inspiration" was not noticed and the song acquired a different form (even the sounds of the champi are incorporated into the music).

So much so that when the producer visited India, he heard the song and not only failed to recognise the tune, but commended SD. The song goes a long way in breaking the tedium of an otherwise intense film on the hypocrisy of society. In the ocean of gloom and doom, this song stands out for its joie de vivre. 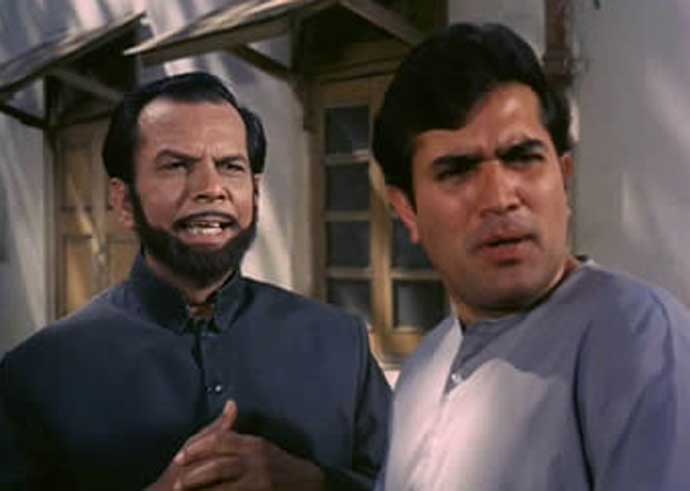 With Rajesh Khanna in Anand.

· Jungle Mein Mor Naacha Kisi Ne Na Dekha, Madhumati: This is a delightful song. The lyrics could only have been written by Shailendra and there is a story behind it.

Shailendra came home one day over-drunk. Hemant Kumar, his neighbour, saw his condition and smirked contemptuously. That incident triggered this song. His complaint? No one has seen a peacock dance in the jungle, but when he drinks "a little" the whole world comes to know about it!

Johnny Walker sings to an interested audience of inebriated villagers. Salil Choudhary’s music is bubbly and complements Johnny Walker’s antics which are hilarious.

This was a real-life romance being played out: Johnny Walker and Noor (who was actress Shakila’s sister) fell in love on the sets of Aar Paar and got married. This was the song which reportedly started it all.

Yasmin, all dimpled and cute, is wooed by Johnny Walker who insists he’s lost his heart somewhere. He looks under the table, amongst the files while Yasmin is not very sympathetic. Johnny Walker wonders - "Kahin Maare Dar Ke Chuhaa To Nahin Ho Gayaa, Kone Kone Dekhaa Na Jaane Kahaan Kho Gayaa", and so it goes on, back and forth.

Wel,, the list goes on and on. OP Nayyar, who had done 15 films with Johnny Walker – the maximum among all music directors - told me that Johnny Walker, for whom he had high regard as an actor and human being, owed a lot of his success to his music.

An immodest statement but a true one!

Johnny Walker quit films when comedy turned vulgar. His career slowed down and he retired with grace. But there was never any sense of frustration. He died a contented man on July 29, 2003.

Yes, indeed, Johnny Walker was a cult funmeister, a good human being, whose plummy voice and infectious grin, whose zest for life touched every film viewer.

He gave us good cinema, good songs, and lots of laughter.

Also read: Bollywood is not ready for spoof comedy