Kalank Movie Review: ‘It's bombastic, bizarre and Bhansali-lite. But 'Kalank' does touch your heart!’

'Kalank' hits you — in the heart. It moves you with its spotlight on sheer love, despite the overblown sets and the disco-ghunghroo lines. For that, it gets three stars.

So, here’s the most important thing about Kalank — please leave your logic at home. And please wait for the second half.

Set in 1947, Roop (Alia), a ‘village girl’, wearing Rajasthani clothes, but bounding about snowy peaks, is pushed into a second marriage with Dev Choudhary (Aditya) by his fatally ill wife Satya (Sonakshi). Educated but born to a poor musician pitaji, Roop agrees to this loveless deal. She moves to the Choudharys’ mansion in Husnabad — near Lahore’s red-light area, Hira Mandi. 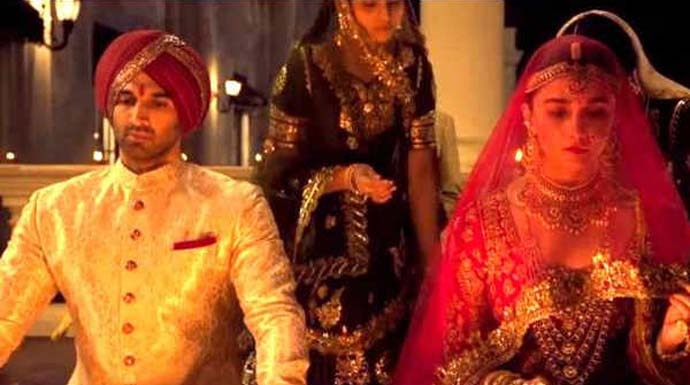 Roop and Dev: Pushed into a loveless marriage, all respect, no pyaar. (Still from Kalank: YouTube)

Roop ignores her disinterested husband and his rich father, Balraj (Sanjay Dutt in granny glasses) — who has a secret hidden in the folds of his jamawar shawl.

Roop refuses to be a part of Dev’s life — until Satya lets her learn music from Bahar Begum (Madhuri), Hira Mandi’s famous courtesan.

Here, Roop meets Zafar, a kohl-eyed, swaggering sexy bastard (literally) who sweeps her off her feet.

Does Roop succumb to Zafar’s charms? Does Dev claim his wife? Does Zafar also have a secret that he’s hiding in his sex-pack abs? What's the secret hidden in those sex-pack abs? (Kalank poster)

Does the first half ever end?

Yes. Although the wait's a challenge. Most of the time, you’re wandering about in hollow sets, all glass walls and synthetic chandeliers, zari, brocade and maang-tikas that give the chandeliers a run.

But for all the bling, there’s little depth.

The sets are so astonishing, you imagine Karan Johar telling Abhishek Varman, chal yaar, throw everything in — thus, there’s a breath-taking Dussehra sequence in Hira Mandi which shows you everything in the world, from Venice to Bali to homage to Sanjay Leela Bhansali — except for Hira Mandi. The opulent Chaudhary mansion reminds you of Raazi and its oppressiveness. The kohl-eyed, stubbly Varun reminds you of Shah Rukh Khan and how he would have ravished this role, while the deep-focus shots remind you of Pakeezah, without the depth.

You’re not helped by the mostly flat acting of all — except Madhuri Dixit, who, queen-like, lights up the screen.

She simply raises an eyebrow, twirls a finger, twinkles her eyes — and the screen goes ablaze. I wanted to join the front-benchers screaming with delight when, pre-interval, she naughtily murmurs, philhaal is guftagu se thak gaye hain hum. But, despite that, wait for the second half.

It is here that Kalank actually lifts and you can safely say those three magical words — Aditya Roy Kapur.

Dev’s character comes into his own with great, but quiet, force. A scene where Dev and Zafar meet crackles — there’s far more chemistry here than between the heroes and heroines. (There’s also a guest appearance by Kriti Sanon doing an Aishwarya/Kajrare redux — but can someone please make these women eat something more than quinoa before dancing kathak, which needs fullness for its lachak, for God’s sake!) Thankfully, it’s Aditya’s face that impresses — he’s impassive but conveys stormy feeling within. Without mouthing lines like — ‘Woh ek aandhi ki tarah meri zindagi me aaya’. Kalank is full of bombast — that’s fine if you like masaledaar Bollywood. I only wish its actors had acted more, let the air literally collect the growling thunder of passion, instead of bizarre distractions, including a bull fight (don’t ask — you’ll see).

Yet, the second half is engaging. As the characters discover each other’s guilty secrets, hearts are shattered, nerves gathered, tension over looming Partition also grows.

Kunal Khemu pulls off a fine act as the spiteful gunda Abdul who wants to force the Choudharys out — his role is literally laced with venom. The finale's train sequence (involving apparently the world’s longest platform plus an ironic DDLJ-style twist) impacts — it leaves you thinking of the mohalla dislikes that made up so much of the violence of Partition. And as Dev, Zafar and Roop flee a murderous mob, the escape leaves you enthralled — and saddened — as one great love dies.

Just as it does in so many of our lives.

That’s where Kalank hits you — in the heart.

Despite its overblown, frilly sets and its disco-ghunghroo lines, the movie moves you with its spotlight on sheer love.

How you can fall in love, despite yourself. How you will be torn apart puzzling if love is a sin or a blessing. And finally, how you must love only when your love is respected. As Bahar murmurs, mohabbat usse karein jo aapki izzat kar sake — aapki mohaabat ko aapse zyada mohabbat kar sake. Wise words. Both in love. And in politics.

But that’s another drama.

Also read: Madhuri Dixit Returns: Be it 'Total Dhamaal' or 'Kalank', why Madhuri is beyond box office success

Post your comment
#Varun Dhawan, #Alia Bhatt, #Madhuri Dixit, #Sanjay leela bhansali
The views and opinions expressed in this article are those of the authors and do not necessarily reflect the official policy or position of DailyO.in or the India Today Group. The writers are solely responsible for any claims arising out of the contents of this article.