The DMK patriarch made rich contributions not just to the field of politics, but also films and literature.

A successful politician, who enjoyed five separate terms as chief minister of Tamil Nadu in the 1969-2011 period, M Karunanidhi also contributed to numerous Tamil films and plays as a screenwriter.

It is probably also for this reason that the situation in Tamil Nadu is currently precarious, with people finding it difficult to control their emotions over the death of Karunanidhi. 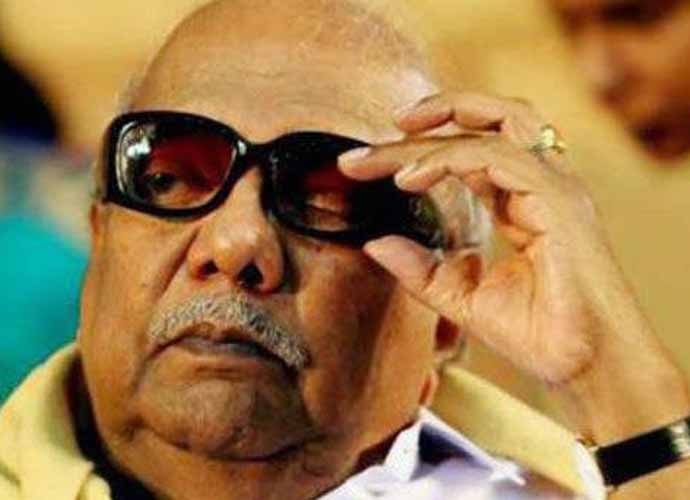 The DMK patriarch had been suffering ill health for a while. (Source: India Today)

Ninety-four-year-old Karunanidhi had been battling health issues for a long time. He may no longer be with us but, as they say, an artist never dies because he continues to live through his art.

I had always known Karunanidhi was also referred to as 'Kalaignar' but had not known its meaning and also why the title was used for the DMK patriarch.

I recently found out that the word means 'artist'.

So, as a film-goer, literature lover and theatre enthusiast, who also participates in nukkad nataks myself, I got more interested in Karunanidhi — the artist.

Karunanidhi developed an interest in drama, poetry and literature while he was still in school.

He started his cinema career as a screenwriter and has numerous stories, plays, novels and a multiple-volume memoir to his credit.

The DMK leader rose to fame in no time through his unparalleled wit and theatrical skills. These qualities came in handy when he set out to write historical and social (reformist) stories, seeded in the socialist and rationalist ideals of the Dravidian movement to which Kalaignar owed his political rise. The movie Parasakthi (1952) is one such example. The film was initially banned but sparked controversies during its release and turned out to be a big turning point in Tamil cinema. Based on similarly sensitive issues of widow remarriage, untouchability, the zamindari system and religious hypocrisy, two other Tamil films — Panam and Thangarathnam — created a huge buzz among film-goers and Karunanidhi won wide applause for his brilliant screenplay writing.

According to reports, TR Sundaram, the owner of Modern Theatres located on the foothills of Yercaud, played a pivotal role in honouring the talents of Karunanidhi, Jayalalithaa and MG Ramachandran.

At the age of 20, Karunanidhi worked for Jupiter Pictures as a scriptwriter.

The DMK leader made immense contributions to Tamil literature. The multifaceted Kalaignar brought out the best of his literary talent in the form of poems, essays and books.

He wrote over 100 books, which also included collections of poetry. Karunanidhi wrote a host of plays, including Mani Makudam and Avan Pithana. He was bestowed with the Rajarajan Award for his book Thenpandi Singam.

Karunanidhi continued screenwriting even when he was active in politics. Ponnar Shankar, which released in 2011, had its screenplay written by Kalaignar.

The DMK leader took a plunge into political life at the young age of 13, according to a report published in the Deccan Chronicle. "The DMK chief's literary pursuit began with a handwritten magazine Manavanesan while he was still in school at Tiruvarur," the report says.

Despite not being in the best of health in recent years, Kalaignar wrote the TV series Ramanujar at the age of 92.

Karunanidhi wrote the script and dialogues for many early MGR starrers as well, including Abhimanyu, Manthiri Kumari, Marudhanaattu Ilavarasi and Naam. MGR went on to become his political challenger. But their love for art and literature remained a common thread between them.

The Kalaignar may not be among us today, but Tamil cinema will always remember the contributions made by Karunanidhi.

Also read: The Imran Khan I know is his own man

#Mani makudam, #Dmk patriarch, #Kalaignar, #Karunanidhi dies
The views and opinions expressed in this article are those of the authors and do not necessarily reflect the official policy or position of DailyO.in or the India Today Group. The writers are solely responsible for any claims arising out of the contents of this article.