Raising a toast to Kerala and its cuisine – Kerala’s first woman chef is serving delectable food that will give you multiple foodgasms.

It was with great reluctance that the Food Craft Institute, Kozhikode, accepted Latha Kuniyil as a student — women were not physically capable of becoming chefs, the authorities argued, but they had to bow before her determination.

Today, Latha can proudly declare that she is Kerala’s first woman chef — and after having polished off the spread she laid out for me at the Grand Hyatt Kochi, Bolgatty, overlooking the Vembanad backwaters, I saluted her determination to hang on to her dream even after not finding a chef's job in Kozhikode after graduating from the Food Craft Institute. Latha’s paternal grandmother was a temple cook, so, in a way, she is carrying forward a family legacy, and she has held a number of responsible positions — one of them being the personal chef of Dubai-based billionaire and hotelier B. Ravi Pillai. Interestingly, her present place of employment is the showpiece property of another rich and famous Malayali, M.A. Yusuff Ali, owner of the Lulu group of department stores and a hotelier ranked No.1 among 100 business owners in the Arabian world by Forbes Middle East. My meal started with the famous kulukki (shaken) sarbath of Kozhikode.

Introduced to me by the restaurant manager of Malabar Cafe, a young woman from Uttarakhand, the shaken drink started off like Kerala's answer to a virgin mojito (the only addition being the basil, or sabja, seeds to lend a crunch to the experience), but today, there are as many inventive variants as there are people ready to experiment with it, so I chose pineapple from the six choices I was given. Believe me, it was just the relief I needed from the muggy heat. Foodgasms galore: Red mullet is a staple dish in Kerala and is often featured on restaurant menus. (Source: Mail Today)

After the Kozhikode cooler came a steady procession of food -- the Syrian Christian Kozhi Mappas (chicken and coconut milk), Meen Manga Curry (fish cooked with raw mango), Beef Chilli Fry (a favourite of the Malayalis), Karimeen Pollichatthu (pearl spot fish -- another star of the Kerala kitchen -- marinated with Kashmiri red chillies, black pepper and turmeric powder, wrapped in a banana leaf, and then grilled), delicious Podhi Meen (for want of a better word, little pakodas made with anchovies), parantha squares wrapped in duck egg omelette, and finally, the unputdownable Malabar Mutton Dum Biryani made with the aromatic, short-grained jeerakasala rice of Wyanad and served with raita, puthina chammanthi (mint chutney) and date pickle.

After all this food, I desperately needed mishti -- and it came in the form of the Onam must-have, Parippu Payasam, or lentils sequentially cooked in ghee, coconut water and jaggery water, and then topped up with first-press coconut milk and cashew. All of this could only be washed down with a chai glass of Sulaimani tea (lemon tea sweetened by a cinnamon stick and a sprig of mint added for visual and flavour effect). It is central to the plot of the Malayalam film, Ustad Hotel, and it was the favourite drink of one of the greatest Malayam writers, Vaikom Mohammad Basheer. 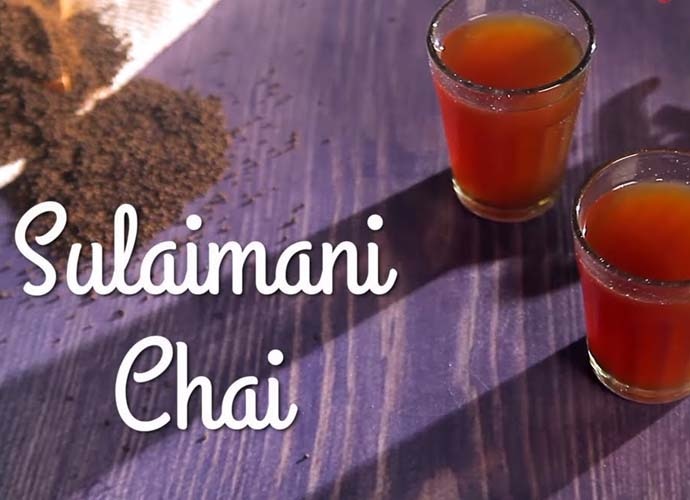 A reward for the digestive tract: Sulaimani, in Arabic, means 'man of peace'. (Source: YouTube)

Sulaimani in Arabic means ‘man of peace’. A glass of it is enough to calm your digestive tract after all the hard work it has done.

Also Read: Listen up. TikTok does have a plus side!