[Book extract] The acknowledgement of his talent by his parents gave RD immense satisfaction.

The Bengali Puja songs of 1974 were a thrilling experience for listeners. Both Asha (Bhosle) and RD (Burman) sang memorable ones. RD as a singer and composer had set a very high standard for himself. Asha sang 'Mahuaay jomechhe aaj mou go' and 'Sondhya belay tumi aami'. RD sang 'Jete Jete pathe holo deri' and 'Tomate amate'. All the four songs are unbelievably melodious and emotionally moving. Hindi film viewers also got the taste of the tunes of these songs. The songs 'Mohuaay jomechhe' and 'Sondhya Belaay tumi ami' were re-sung in Hindi as 'Liyo na babu' (Kahte Hai Mujhko Raja, 1975) and 'Tere bin ek pal bhi' (Jaane Jaan, 1983) respectively. RD's songs are famous in both Bengali and Hindi. Remember 'Tere bina zindagi se koi' (Aandhi, 1975) and 'Do nainon mein' (Khushbu, 1975)? These were the same Bengali songs that RD had sung.

RD talked about this period of his life to me. He told that he had felt miserable in 1969 when people congratulated his father for the success of Aradhana. He thought he also deserved recognition for his contributions to that film. But now comparison between father and son started again and the sufferer this time around was SD Burman. People raised RD to a higher pinnacle than his father. RD was upset. That day was 1 October, 1974, his father's birthday. RD's mother Meera said to him, "Come tonight without fail."

In the studio too, SD's birthday was celebrated. RD was present. However, he was in an awkward position. Everybody was praising him in front of his father for his compositions in various films, like Amar Prem, Caravan, Parichay, Yaadon Ki Baraat, Heera Panna, Hare Rama Hare Krishna, Aap Ki Kasam, Ajnabi etc. Nobody talked about S.D. Burman's Prem Nagar, Sagina and Us Par released in the same year. RD felt sad for his father and silently walked away. Did he understand SD's wounded feelings? Yes, he did. At least, I understood that to be the case during the course of our conversations.

There was no birthday celebration at home as such. It was a plain parents-son affair. The three of them would blow out the candles, cut the cake and have dinner together. At about a quarter to 11 at night, RD came to 'Jet' and heard loud music from inside. All the songs were his, the compositions of Aap Ki Kasam and Ajnabi. He did not ring the bell and just stood silently outside. His father was listening to his songs. RD didn't think it was proper to dash in at such a moment. Moreover, he was triumphant. Who after all, was listening?

The great maestro SD Burman. RD stood spellbound, listening to his own compositions. The music stopped at about midnight and it was only then that RD pressed the bell. Meera opened the door with a big smile. He touched his parents' feet. He heard distinctly what SD mumbled as a blessing, "I pray to God... Be a great man." After that, started the game of hide and seek between the father and son. Even at dinner SD was not talking but sitting with a grave face. Meera could not bear it anymore. She asked, "What's the matter with you? For so long you were jumping with great enthusiasm, uttering 'Shabash, Shabash' listening to your son's scores...Now why such a glum face?" SD replied with a smile, "What are you up to? Do you want me to admit that Pancham has grown bigger in stature than me? Yes, I do. We're lucky to have a son like him."

The acknowledgement of his talent by his parents gave Pancham immense satisfaction. He got down, touched his father's feet and said, "Touch my head and bless me, I want to become a worthy son of yours." For the first time RD saw tears of joy in his father's eyes. SD said again, "Defeat from a son in excellence is the greatest victory ever. There is no greater victory than that in the history of the world." 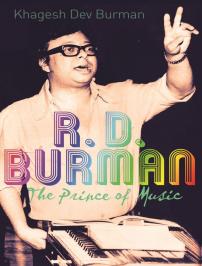 Post your comment
#Book Extract, #Asha Bhosle, #SD Burman, #Pancham
The views and opinions expressed in this article are those of the authors and do not necessarily reflect the official policy or position of DailyO.in or the India Today Group. The writers are solely responsible for any claims arising out of the contents of this article.