Why India will never see another Kishore Kumar

One of the first in Hindi playback singing to have an astute sense of masculinity and when combined with the panache that the actor within brought.

Kishore Kumar was not a trained singer. In fact, even as a child before his voice broke he was said to have a very poor voice.

According to his elder brother, Ashok Kumar, had it not been for a childhood accident where the young Abhas, his real name, cut his toe while barging in on his mother who was chopping vegetables and ended up crying non-stop for a month, perhaps his voice might have never cleared.

In spite of his elder brother being one of the biggest stars in India, Kishore wasn't interested in either acting or even singing beyond a point.

He had come to Bombay only to meet KL Saigal, which he thought would be possible largely because of being Ashok Kumar's brother, but even though he couldn't meet his idol he ended up sticking on in the city.

Kishore also never stopped practicing. In an quote from one of the essays in "The Sad and The Glad of Kishore Kumar", a homage on the singer's first death anniversary in 1988, Ashok Kumar credits his brother's talent of hitting the note - unerringly, every time - and his uncanny sense of rhythm besides his ability to practice regularly as the reasons for becoming a singer. Unlike other iconic singers, Kishore Kumar was an acknowledged multifaceted personality whose talents transcended the realm of playback singing.

One of his breakthrough roles in Ladki (1953) came about when he was actually singing a song and the producer was so floored by Kumar's "acting" while singing that he signed him up.

Both Ladki and Lehren (1953) introduced the actor in the "actor-singer" to the world.

HS Rawail, who directed Kumar in Lehren, was convinced that the musicality bred into Kumar's very marrow bestowed a fantastic flair for gesture and that helped him transform from a singer who could act to a star in his own right.

The success of Chalti Ka Naam Gaadi (1958) revealed the ease with which Kumar could don the hats of singer, producer, and star but this is also one of the first films that display the rare ability which separated Kumar from all other playback singers.

One of Kishore Kumar's enduring legacies has been the manner in which he induced speech into music, that music historian Roshan Shahani believed is a central aspect of classical Indian music.

Remember "Hum The Woh Thi" and "Ek Ladki Bheegi Bhaagi Si"? As an untrained singer Kumar's riyaz would also include observation and music composer Kalyanji of Kalyanji-Anandji fame credits this as a liberating force that made it simple for the singer to make dialogue from music.

Kumar's voice was also one of the first in Hindi playback singing to have an astute sense of masculinity and when combined with the panache that the actor within brought, the result was a singer that remains peerless even 28 years after his death. Padosan was also one of Kishore Da's memorable films.

In addition to his onscreen persona his off-screen hijinks, too, contributed immensely to the creation of his iconic persona.

Kumar was famous for his eccentricities that included driving off to Mussoorie once after seeing masoor dal on a street side, walking out on Income Tax officials who raided his house by pretending to be someone else, talking to trees that he gave names to, and such.

He even shaved one-half of his head because the producer had only made part payment and, therefore, only "half Kishore Kumar" showed up.

His wry sense of humour can be gauged from a brilliant piece that he wrote for Filmfare's January 1957 issue where his "devastating wit" dissed that nebulous thing called "mood", which was responsible for all ills of the business of acting.

Questioning the concept of mood, Kumar decried actors for having pretensions and said that the best way to make them work would be to waive a Rs 5,000 cheque from behind the camera, which, he insisted, would make artists work up every possible mood in the world.

A few years later in a hallucinatory piece unlike any Kumar conducted an interview with himself for the magazine that to date remains a wonderful insight into his persona.

One of his closest collaborators, Dev Anand, for whom Kumar sang his first solo song, "Marne ki duyaen" in Ziddi (1948), found Kumar's unpreparedness to be the trigger for his changing moods or eccentricities.

Anand believed that the untrained singer aspect of Kumar came into play and the singer would simply take off if he believed that he wasn't ready to face a situation.

HS Rawail also believed that Kumar never seemed to fight life and either found a simple alternative or simply back out.

Once Rawail wanted dates from Kumar to complete the recording for a song but the singer was too busy and even when Rawail told him that he would get Rafi to playback for him, Kumar didn't have a problem.

But at the same time Kumar's sense of reality rarely lost to his quirkiness. He famously acknowledged Lata Mangeshkar's superiority and ensured that he was always paid a rupee less than her and once slapped a chamcha who said, "Kishoreji ne Rafi ki chutti kar di!" (Kishore's success had made Rafi pack his bags) and threw him out of the studio.

Kumar also refused to tow I&B Minster VC Shukla's diktat during the Emergency by rejecting the government's demand to publicise the infamous 20-Point Programme. His songs were banned from radio and television, but he couldn't care less. 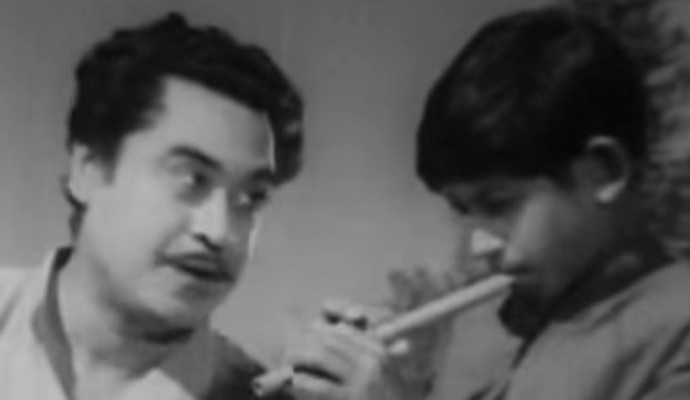 The song "Aa Chalke Tujhe" from Door Gagan Ki Chaaon Mein reflects an emotional bond between a father and a son.

The fun actor also had a very serious side that went beyond mood swings. The success of Chalti Ka Naam Gaadi created a platform upon which he could simply continue to replicate the formula, and even though for a while the actor Kishore Kumar did that, the artist within embarked on a different trajectory.

The first film he produced and directed, Door Gagan Ki Chaaon Mein (1964), the story of an ex-army officer trying to find a cure for his mute son, was a departure from the buffoonery that had come to be expected of him.

He even wrote the film and composed the music besides acting as well. His films as director display a strange balance between the farcical such as Hum Do Daku (1957), Badhti Ka Naam Dadhi (1974), Sabhash Daddy (1979) and the philosophical such as Door Ka Rahi (1971) and Door Waadiyon Mein Kahin (1980).

Although his serious fare ended up failing at the box office, his work nonetheless impressed many including Satyajit Ray, who was mesmerised by the way Kumar used only natural ambient sounds to create the background score in the song-less Door Waadiyon Mein Kahin.

In the spirit of true underappreciated geniuses, Kishore Kumar, much like someone such as Orson Welles was forced to work within certain parameters that their respective industries could best comprehend. Similarly in the spirit of geniuses Kishore Kumar ended up created brilliance that outshone most even within the boundaries.

#Kishore Kumar, #Hindi Cinema
The views and opinions expressed in this article are those of the authors and do not necessarily reflect the official policy or position of DailyO.in or the India Today Group. The writers are solely responsible for any claims arising out of the contents of this article.