Do stars live such uneventful lives or is KJo addicted to gossip?

Of all the Bollywood talk shows that one has come across in recent times, Koffee With Karan is here to stay. And if you haven’t figured that out in the last 14-odd years of its running, it's 6th season and counting, well, I pity you.

Now, Bollywood and the stars that make Bollywood have always allured the masses, and understandably so. Their lives, their likes, their secrets, et al, are all just so intriguing that we want to keep going back for a generous helping. Simi Garewal served us a similar platter when we sat down with her for a Rendezvous. Simi, however, in her sombre voice, her bespoke white coat and her signature robust black hair, spoke of deeper issues — or was it just her deep voice?

But that was before social media took over our lives.

With Instagram and Twitter playing your personal talk show hosts, is it even possible to tell us something about these stars that we don’t already know? Yup. And Karan Johar has done the unthinkable.

In the era of social media, Karan has managed to keep our interests piqued with one question and one question alone — ‘who are you dating?’ — or some variation of it.

Here’s a list of things we found out in those 40 minutes: 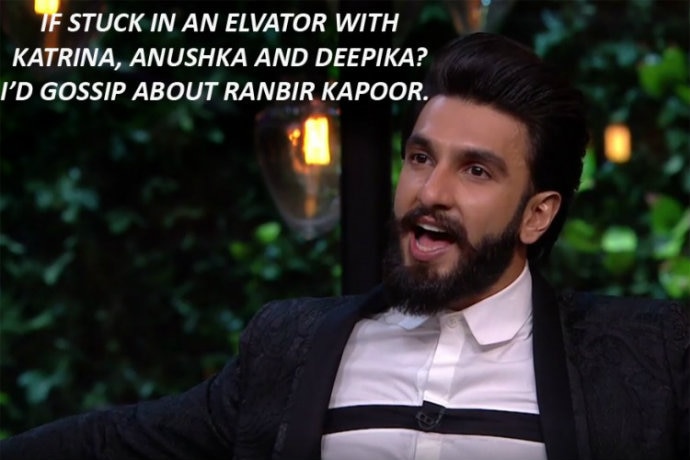 If you think Ranbir’s presence on the show is palpable, you are right. Note how in actuality RK was not, I repeat, NOT there.

Similar was the undertone of the Katrina Kaif-Anushka Sharma episode from Season 5.

The Ranbir Kapoor-Ranveer Singh episode from the same season towed the same line — except it revolved around Deepika instead.

In last night’s Season 6 premiere episode with Alia Bhatt and Deepika, Ranbir was back on the KWK radar again.

Granted that KWK positions itself in the clutter of talk shows as a 'friendly conversation with friends' and banter will obviously play a large role in it. But I don't remember the last time I sat down with my friends for a chat and only discussed our dating lives.

So, why are their 'friendly conversations' different from ours? Is it because stars live such uneventful lives that the only way to make it interesting is to spruce it up with link-up gossip? Or is it because Karan Johar is apparently incapable of asking intelligent, consequential questions and talk about stuff that appeals to adults, not just a teenage demographic?

For when an actor opens up about depression and KJo equates that to her break-up, it is belittling. It may have had a lot to do with that, but to insinuate that there was nothing else is just shallow.

When KJo pits actors against each other not on the basis of their performances, but the fact that they are or were rumoured to have been dating the same person, it takes away from whatever little is left of their craft.

At this rate, Karan might as well sit down for a round of FLAMES with his guests and ask them to fill his slam book.

But we're invested in not letting the show die. We want Karan to ask better questions. Questions that are thought-provoking and not giggle-inducing.

Here's our comprehensive list of questions Karan can pick from:

Also read: From 'unsuitable boy' to 'unafraid boy': Why Karan Johar is refusing to grow up

#Ranveer Singh, #Ranbir Kapoor, #Alia Bhatt, #Deepika Padukone
The views and opinions expressed in this article are those of the authors and do not necessarily reflect the official policy or position of DailyO.in or the India Today Group. The writers are solely responsible for any claims arising out of the contents of this article.