Krishan Chander (1914-1977) is considered one of the greatest short story writers Urdu literature has produced. A firm believer in the upliftment of the oppressed and the downtrodden, Chander dreamt and strived for a society in which every human being is respected irrespective of his religion, caste and sect, a civilisation that is free from exploitation and oppression.

Chander has highlighted the plight of workers, peasants, writers and Dalits in his works. He was an ardent believer of socialism and opposed capitalism, and class conflict is a major theme in his stories.

At a time when Dalits are being beaten up and lynched for no fault of their own, and manual scavenging, a dehumanising and inhuman occupation, continues to be debated, Krishan Chander’s short story, “Kalu Bhangi (Kalu: The Addict)” holds more importance than ever.

It follows the travails of Kalu Bhangi, a sweeper, whose life is a blank slate, devoid of melody and shorn of comforts. Krishan Chander tells the sad tale in a unique style. 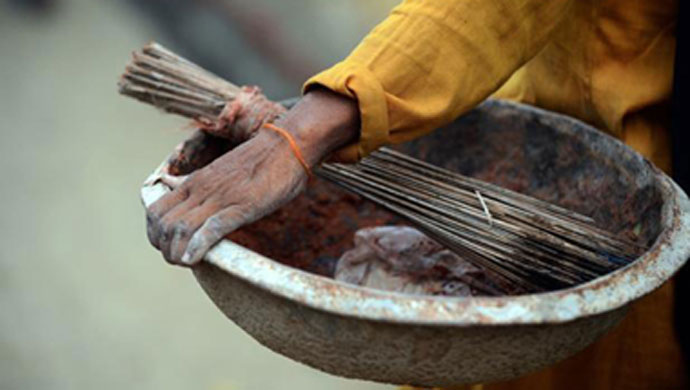 Lyrically told, the story is about a man belonging to the chamar community. Photo: Reuters

Kalu urges the author (Krishan Chander) to write a short story about his life, to which the latter says that there is nothing worthwhile to describe about the sweeper. During this conversation, we come to know about the different shades of Kalu Bhangi’s life.

Lyrically told, the story is about a man belonging to a Dalit community:

“I have often wanted to write about Kalu Bhangi, but what can one write about him? I have looked at his life from all sorts of angles and tried to assess and understand it, but I could never find anything out of ordinary on which I could base a story or even a plain, uninteresting, photographic sketch of him. And yet, I don’t know why, every time I start to write a story, I see Kalu Bhangi standing there in my imagination. He smiles at me and asks: Chhote Sahib, won’t you write a story about me?”

Kalu Bhangi’s shadow follows the writer and reminds him to write a short story about him. But the caste system has humiliated Kalu Bhangi to such an extent that the writer finds it difficult to write even a few lines, let alone anything “good” about this person/character.

“It’s not that I don’t want to write about him, for ages I have really wanted to write about him, try as I might I can't. And so Kalu Bhangi is standing there in the corner of my mind, holding his old broom, with his big bare knees, his rough cracked, ungainly feet, his varicose veins standing out on his dried up legs, his hip bones sticking out, his hungry belly, his dry, ceased, black skin, the dusty hair, on his sunken, chest, his wizened lips, wide nostrils, wrinkled cheeks and bald head shining above the dark hollows of his eyes.”

Kalu Bhangi offers his services to all: he sweeps the streets and cleans filth. He has never been to school, and was unable to witness the spring of life because of his lowly existence. There is no change, no improvement in his life or his meagre salary. It remains marred by exploitation and suppression. He has neither enjoyed romantic love, nor set foot outside his village.

To add to his troubles, Kalu is unable to marry because there is not a single family of his caste around him, and so he can’t hope to find a match for himself. There is no question of any so-called “upper caste” family letting their daughter marry Kalu Bhangi. So, he goes about his drudgery, exhausted by the daily routine. Chander’s depiction of Kalu is the story of every Dalit manual scavenger in today’s India. It brings into focus how the caste system dehumanises a person, so much so that he is unable to find someone one to love, to marry.

“Kalu Bhangi, have you not got married?

I am the only sweeper in this district, Chote Sahib. There is no other for miles around. So how could I get married?”

“I was only seven years old when I first saw Kalu Bhangi. Twenty years later when he died, he looked exactly the same. Not the slightest change. The same knees, the same feet, the same complexion, the same face, the same bald head, the same broken teeth and the same broom. His broom always looked as though he had been born with it in his hand, as though it were part of him.”

“Kalu Bhangi” is as meaningful today as it was when it was written. Discrimination on the basis of caste is still rampant in India. Manual scavenging still exists in 21st century digital India. More than 80 deaths of manual scavengers reported in India in the past two decades are proof.

In Muslim society, fisherfolk (Hanjis), Mochis, Gujjars and other castes go through the same ordeal as Kalu. They need to be liberated from this dangerous occupation which has no place in a civilised world.

Lest we wipe out manual scavenging, Kalu Bhangis will suffer forever.