The characters cannot walk 15 yards without bumping into Indian snake-charmers and the Great Indian Rope Trick.

Chinese audiences are more than used to propaganda infiltrating into their cinema. But many movie-goers were still left surprised by an early dialogue in Stanley Tong’s new Jackie Chan-starring Kung-Fu Yoga - which was recently released in India and China - when a Chinese archaeologist official urges his colleague, played by Chan, to carry out an “archaeological cooperation” with India “to help the Belt and Road Initiative”.

This reference to Chinese president Xi Jinping’s grand infrastructure connectivity plan - his landmark foreign policy initiative - brought much laughter in a Beijing theatre at one of the film’s early screenings.

For the past two years, Chinese audiences have been bombarded with “Belt and Road” propaganda in State newspapers and television. Apparently even a Sunday afternoon at the cinema offers no respite.

That some jarring “officialese” has crept into Kung-Fu Yoga - or at least into the Chinese version of the film which I watched in Beijing - is perhaps no surprise, given that the film is the second product of a co-production agreement signed between Xi and PM Narendra Modi when the former visited India in 2014.

The first co-production film, Xuanzang, told the story of the famed monk (known as Hiuen Tsang in India) who travelled to India in the seventh century. As I wrote of the film, it garnered mixed reviews and was largely uninspiring, even if its talented director Huo Jianqi deserved some praise for trying to stay true to history and eschewing simple stereotyping, which would have perhaps been an easier task.

Kung-Fu Yoga expectedly tries to play to Chan’s strengths - lots of slapstick comedy and martial arts sequences that play very well with the Chinese audience. In China, the film has been received largely positively, and done well at the box office, according to early figures.

Yet the film does very little towards fulfilling what was no doubt the original intention behind the co-production agreement: bridging the huge information and perception gap that exists between India and China.

Two of the world’s biggest film markets certainly provide an excellent platform to help bridge that divide, and an attempt to get them both to engage with each other is long overdue.

For Indian cinema, China is a huge, untapped market, evinced by the success of films such as 3 Idiots and PK, and one that the Indian film industry has largely ignored because of its focus on overseas markets with Indian diaspora. 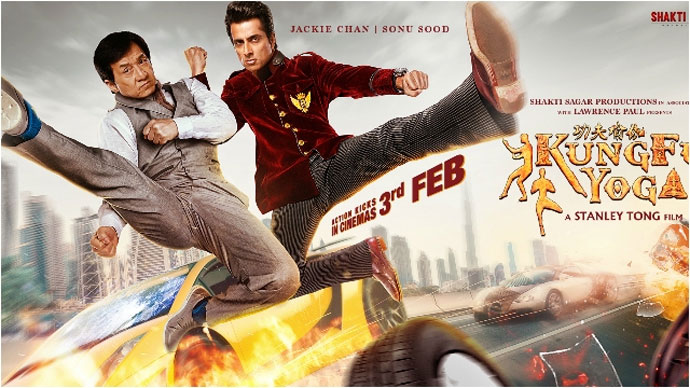 China, meanwhile, is busy with Hollywood’s courtship, with co-productions now taking off as American studios look to cash in on the huge China market and evade the quota system that limits the number of overseas imports but spares co-productions.

Kung-Fu Yoga presented a rare sight of Indian and Chinese stars acting together in stunning locations, including Tibet. The high point of the film was a catchy dance sequence at the very end, choreographed by Farah Khan, that saw Chan and Aarif Rahman, another popular star in China, show off Indian dance moves with their co-stars Sonu Sood, Amyra Dastur and Disha Patani. Alas, such moments were few and far between.

For a Chinese audience, the film ultimately reaffirms their stereotypes about India. Chinese websites delight in sharing articles showing the poverty and dangers of India, while reporting little about other aspects of the country. India is widely seen as a messy and chaotic country - an image that suits the Party media in China that is happy to show the downsides of a democracy.

While it is perhaps hardly the responsibility of a commercial action film to grapple with such issues, the fact is this co-production will do little to change the widespread misperceptions that still prevail.

It is telling that the film, when requiring a luxurious and modern setting, chose Dubai. Even more telling is the first glimpse we see of India, when Chan and his Chinese co-star ride up towards their destination on an elephant - apparently the common mode of transport in India.

The characters cannot walk 15 yards without bumping into Indian snake-charmers and the Great Indian Rope Trick. It is hard to imagine an Indian audience favourably receiving these tropes, even if the tried-and-tested Chan action sequences will always have an audience.

To be sure, there’s lots of kung-fu. But there is very little yoga, besides a few contrived lines about yoga asanas that seem to be inserted just to tick a box.

The film may yet leave a positive legacy by pushing more Chinese directors to seek out Indian themes and locations, still a largely untapped market for China. It may even trigger interest among young Chinese to visit a country that is currently not high on the list for most Chinese tourists.

This very month, another major big-budget film with an Indian setting, starring the actor seen in China as the next Chan, Wang Baoqiang, will also be releasing widely in China. Whether that film will do more to question entrenched stereotypes still remains to be seen.

#India-China Ties, #Jackie Chan, #Kung-Fu Yoga
The views and opinions expressed in this article are those of the authors and do not necessarily reflect the official policy or position of DailyO.in or the India Today Group. The writers are solely responsible for any claims arising out of the contents of this article.