You would recall the masterpiece from Ek Saal (1957) — "Sub Kuchh Luta Ke Hosh Mein Aaye Toh Kya Kiya". Who was the singer? Talat Mahmood, of course, you would say. The quivering silken voice could only belong to him, you would add. This was Ravi's first outing with Talat and what a wonderful job he did.

You have all heard "Jaayen Toh Jaayen Kahaan" from Taxi Driver (1954). Whose voice do you remember? The soulful Talat's, of course. This song became so popular that it fetched SD Burman the Filmfare Best Music Director Award (those days the award was for songs, not movies). It is said that one day SD lost his way while on a walk and that gave birth to this song.

Wait, I haven't finished yet. Some of you may recall the romantic song of Dev Anand in Roop Ki Rani Choron Ka Raja (1961) — "Tum to Dil Ke Taar Chhed Kar". Again, whose voice comes to mind? Talat, surely? One of the few playful songs he has done.

Let me tell you why I am belabouring this point. Many would be shocked to know that Lata Mangeshkar has also sung these songs. So why is only the Talat version of these songs (called twin songs or tandem songs) fresh in public memory? What is the mystery?

Before we do that, consider this fact: the supreme quality of Talat's voice made all singers nervous. Lata, in particular, dreaded singing duets with Talat because she felt that his rich and smooth voice would render hers dull in comparison.

Not so fast, many would say. You have conveniently missed two popular songs where Lata bested Rafi. And no one would hold a contrary opinion — "Rahe Na Rahe Hum" (Mamta, 1966). Does anyone even know that Rafi-Suman Kalyanpur sang it too? And "Aji Rooth Kar Ab Kahaan Jaiyega" (Arzoo, 1965). Rafi stood no chance.

These are, however, along with some other songs, exceptions in an otherwise skewed list in favour of Rafi.

Why only Rafi? Consider Mukesh. Mukesh? But he was a not a trained singer; his range was limited. How could he even compete with Bharat Ratna Lata — the complete singer, the perfect nightingale? Decide for yourselves. "Take Aa Laut Ke Aja Mere Meet" (Rani Rupmati, 1957). Can you imagine any other singer doing justice to this song, Lata included? What Mukesh lacked in musical training, he made up with his pathos-filled voice. Forget Lata, no male singer could compete with him, as we shall see momentarily. "Mujhko is Raat Ki Tanhai Mein" (Dil Bhi Tera Hum Bhi Tere, 1960) — Mukesh won with a massive mandate. There are other songs too — "Humne Tujhko Pyar Kiya Hai Jitna" (Dulha Dulhan, 1964), "Jyot Se Jyot Jagate Chalo" (Sant Gyaneshwar, 1964), "Jis Dil Mein Basa Tha Pyar Tera" (Saheli, 1965), and so on. 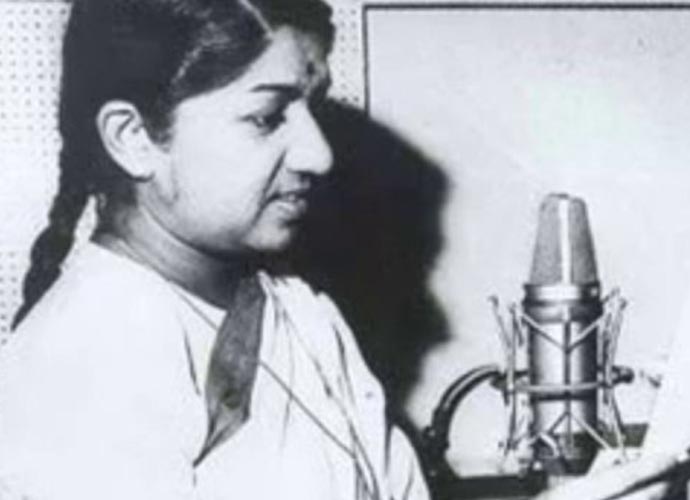 However, the honours were even in these two songs — "Raat Aur Din Diya Jale" (Raat Aur Din, 1967) and "Chandan Sa Badan" (Saraswatichandra, 1968). There are no absolutes in film music, as in life.

And now Kishore Kumar. "Jeevan Ke Safar Mein Rahi" (Munimji, 1955) straightaway invokes Kishore, not Lata. Yet she has a version too. It just came and went without the slightest impact on public memory. "Chhoti Se Yeh Duniya" (Rangoli, 1962) — Shailendra's taunt to Shankar-Jaikishan — was Kishore all the way. Lata was not on the radar. Same with some other songs — "Ajnabi Tum Jane Pehchane Se Lagte Ho" (Hum Sab Ustad Hain, 1965), "Khilte Hain Gul Yahaan" (Sharmilee, 1971).

Why pick on only Lata? Asha came out poorly compared to Talat in "Ai Gham e Dil Kya Karun" (Thokar, 1953); likewise, Geeta Dutt in "Preetam Aan Milo" (Mr and Mrs 55, 1955) — how could anyone compete with CH Atma? Suman Kalyanpur compared to Rafi in "Chaleja Chaleja Chaleja Jahan Pyar Mile" (Jahan Pyar Mile, 1970) though some may insist the honours were even with Hemant Kumar in "Na Tum Hamein Jano" (Baat Ek Raat Ki, 1962).

The conclusion is that female singers fare badly when compared to their male counterparts in twin songs. There are, of course, exceptions but these are too few and far between. Some people may like a female version and that's their personal choice — nothing wrong with that; but they don't constitute public memory as reflected in popularity of songs. Why does this happen?

Historically, Hindi films generally have had strong male-oriented story lines. Not only were the male actors paid more but they appeared first in the credits. The scripts were written around the hero; the film was sold in the name of the hero. Even the villains and comedians were men. It was natural that the songs were composed keeping the hero in mind; as was the picturisation of the song and its placement in the film. The publicity and air-time were similarly done. No wonder then that the distaff end of the twin songs got a short shrift!

The other reason is that when the song is composed for a male, its tuning, texture, nuances, embellishments and range are structured in a style suited to a male voice. Any female singing it will fail. Just consider Lata's Shraddhanjali — her ode to male singers of yesteryears. She is technically perfect, she is dulcet, but these aren't the only qualities required to make a song memorable. The idiom of the song, if favouring a male, cannot accept a female; and vice versa. That's why Lata excels in "Rahe Na Rahe Hum" and "Aji Rooth Kar", which were composed for a female; even Rafi stood no chance.

How about duets? This is a big challenge. If the composer can find the middle ground suiting both genders then the honours are shared equally. But that doesn't always happen and the dominant singer stands out.

Sometimes the full-throated power of the singer tilts the scales; when one sings from the pit of one's stomach without wavering in sweetness and emotion. And a prime example of that is Noor Jahan. Listen to her sing in all pomp and splendour "Kuchh Log Rooth Kar" (Andaleeb, 1969) and "Hamari Sanson Mein" (Mere Hazoor, 1977), which were composed with Ahmed Rushdi and Mehdi Hassan in mind. But she let them have it.

Now let's see how the male singers stack up against each other in twin songs. Consider "Tum Bin Jaoon Kahan" (Pyar Ka Mausam, 1969). No song has divided listeners, music aficionados, even families, as much as this one. Who was better — Rafi or Kishore? Many consider this song to be the tipping point when Kishore moved ahead of Rafi. Aradhana came just after that. The reason was that the original Bengali version "Ek Din Pakhi Ure" was sung by Kishore; also, the fact that Kishore's version got more air-time (radio was the primary source of songs; not many people had gramophones and records) to balance out Rafi, who was ruling the roost till then. Also, Kishore's version came right at the beginning of the movie and set the mood for the three other versions that followed. His masterly yodelling certainly helped. Even Kishore's sad version sounded wistful and soulful. Rafi only got to sing after the two Kishore versions. Even though his rendition was top drawer, it was not enough.

But like I stated earlier, by way of a disclaimer, your personal choice may be Rafi. And that needs to be acknowledged and respected.

Let's see how Rafi fares before Mukesh. Just one song needs to be mentioned — "Saranga Teri Yaad Mein" (Saranga, 1961). The composition of the song was such that only the King of Pathos could do justice to it. No other male singer, including Rafi in this case, could even come close. Many even don't know that Rafi also rendered this song, but his version sunk into the deep dark ocean with nary a trace.

Even Manna Dey could not trump Mukesh's heart-touching rendition of "Zindagi Khwaab Hai" (Jaagte Raho, 1956). Mukesh invested the song with emotion with consummate ease but Manna, otherwise technically the best Hindi film singer, seemed to be trying. Alas, what matters is what appeals to the heart, not mind. Manna's version wasn't used in the film.

This brings me to a rather interesting feature existing in Hindi film music those days.

During the '50s, HMV used to have version recordings of popular Hindi songs on their discs, which were not necessarily part of films. This was a concept imported from the West where popular songs used to be recorded by various singers. So, a Rafi would sing a Mukesh, a Hemant would do a Talat, and so on. But the singers, after some time, when unfair comparisons started being made, got together and forced HMV to scrap this concept. But even after abandoning the idea, one song that fell through the cracks was Talat's rendition of "Chal Ud Ja Re Panchhi", which Rafi had sung for the film Bhabhi (1957). Talat's version (not used in the film) was already in the market, releasing as "Version Recording FT21027 Twin/Black Label 78 RPM". This song clearly belonged to Rafi; Talat could not win every time.

So why was there a need to have twin songs in films and engender comparisons and attendant controversies? One purpose could be for the song to serve as a reminder, as a jog to the memory of childhood days — "Bachpan Ke Din Bhula Na Dena" (Deedar, 1951) sung by Lata/Shamshad Begum in one version, and later by Rafi in the second; and "Phoolon Ka Taaron Ka" (Hare Ram Hare Krishna, 1971) sung by Lata, and later by Kishore. Or could serve as a taunt to infidelity and unkept promise — Meena Kumari's earlier version pledging troth was later used by Pradeep Kumar to point out her betrayal in "Dil Jo Na Keh Saka". Or it could be the parents and children singing their respective versions of a family song — "Yaadon Ki Baaraat" (Yaadon Ki Baaraat, 1973), or "Tum Bin Jaaon Kahaan", for example. But I suppose the main reason was expediency — when you have a good product, why not have more than one singer sing it.

The institution of twin songs began to lose its lustre from the '80s onwards. But a marked change was taking place even with these few songs. With films developing a conscience and heroines getting meatier roles, more and more songs were being composed for women characters. The earlier imbalance in twin songs began to get redressed. With "Tujhe Naraaz Nahin Zindagi" (Masoom, 1983), Lata edged ahead of Anup Ghoshal; Rudaali (1993) had one twin song — "Dil Hoom Hoom Kare" sung by Lata and Bhupen Hazarika (also the music director). Both did a commendable job. The move also had a triplet song — "Samay O Dheere Chalo" sung by Lata, Asha and Bhupen. Asha was top class. Maya Memsaab (1993) had "Ek Haseen Nigaah Ka" by Kumar Sanu and Lata. Lata was far ahead.

While the remakes/remixes cater to the new generation and do not lend themselves to comparison with the original songs, they go a long way in fostering interest in the classics, and keeping them alive in the present generation, albeit in a new avatar.