Isn't it humanly possible for one to love two people at once?

I remember clearly how and when I encountered India-born writer, Lawrence Durrell (1912-1990). Many years ago, on a wintry evening, in a towering pile of books at home I found a copy of Justine — the first of the four books that form The Alexandria Quartet (1957-1960). Reading Durrell, for me, was a window to a new world. An experience that will remain engraved on my memory, perhaps until its senile decay.

Durrell not only seemed to me the undisputed master of the English language for his tremendous prose gift; more importantly, someone who taught me about the supreme logic of love more than any other writer could. I discovered new facets of love that are difficult to otherwise understand. For love can be like a hieroglyphic language. It can be baffling to the extent that sometimes we fail to decipher its meaning. And what is remarkable about The Alexandria Quartet is that Durrell has explained this hieroglyphic language with so much ease and certitude. He goes right to the bone.

The Alexandria Quartet explores love in all moods, mingled with corruption and deceit. Durrell had a powerful gift for imaginative prose; he was skillful beyond most writers of his time. He managed to produce some splendid fireworks in his vast oeuvre, which comprises seven novels, a quartet, a quintet, two collections of poetry, six travel books, two books on humour and a work of translation on Pope Joan. It is obvious The Alexandria Quartet holds a very important place in the literature of the past century. But this place is so profound and the variety of characters in The Alexandria Quartet so astonishing and fascinating that it would be difficult and unjust to treat the entire subject in such a brief space.

It must be said that Durrell, as if miraculously, seemed to know how to sprinkle mots justes, at the right places. I have little doubt in my mind that had Flaubert ever been asked to choose among English language writers the lord of his doctrine le mot juste, he would have certainly crowned Durrell in attendance of all his contemporaries.

By the time I began reading Justine, I was already quite well-read for a boy of my age, and knew works of many a writer of great repute. I won't name them here for it will take more than a yard to list them. Yet for me, the sui generis style in which Durrell used language was something new.

Half way through the first book of the series, with the narrator Darley, the reader is also bound to fall in love with Justine, the Jewish wife of a wealthy Alexandrian businessman. By the end of the book, I was sure I had just finished reading a remarkable work of fiction, which was strangely akin to reading a mammoth poem. 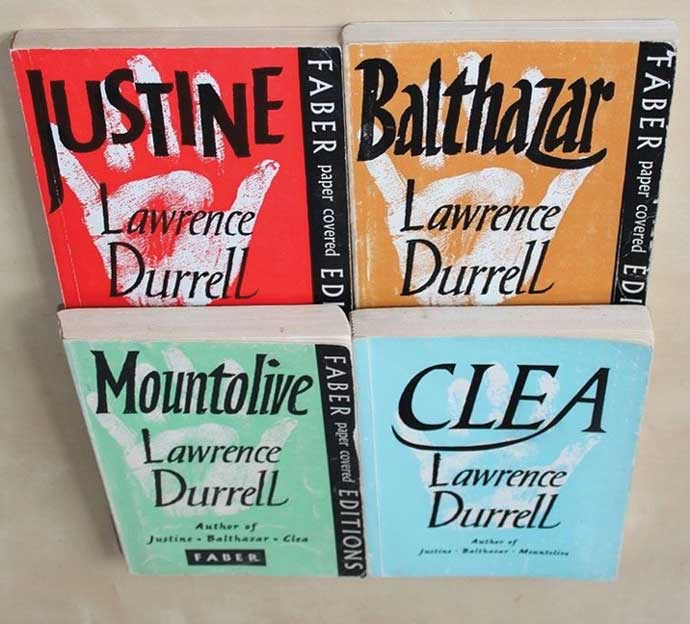 There were many who invidiously accused Durrell of disguising simple statements in masquerade dresses as it were in The Alexandria Quartet. But for anyone who admires rhythm and virtuosity in prose, those masquerade dresses will be nothing less than poetry. Durrell was a poet of extraordinary merit, his prose carried that discernable poetic essence. His passages move in a tide-like rhythm. There's nothing dull about them; he has a godlike regularity when it comes to producing excellent prose page after page - he is always busy describing people, their psyches, places, atmosphere, and "the city which has everything but happiness to offer its lovers". The ambiance and feel of places like Rue Fuad, Arab backstreets, L'Etoile, Cecil Hotel, brothels and dance bars are described with such mastery that it is hard not to adore the beauty of Alexandria as a city.

The Alexandria Quartet is replete with quotable lines and passages that demand the reader to take its creator seriously. For instance:

"It is hard to fight with one's heart's desire, whatever it wishes to get, it purchases at the cost of soul."

"We use each other like axes to cut down the ones we really love."

"A genius has nobody in whom he can confide."

"Humility, the last trap that awaits the ego in search of absolute truth."

"There are only three things to be done with a woman: you can love her, suffer for her or turn her into literature."

The reader of these novels may argue whether the human values expounded are even worth the elaborate virtuosity given to them by the writer. Strange as it may sound, the characters in The Alexandria Quartet remain unperturbed despite encountering infidelity in their relationship.

Their agony is merely momentary as they go about their lives, taking all in the faces, whilst sometimes harbouring the feeling of revenge in their hearts. The thin nature of human values with which the novels endeavour to analyse love has been questioned by many critics. They find profound human relationships missing in the novels to support Durrell's claim of an investigation of love. They found the relationships in the novels to be immoral. But isn't it humanly possible for one to love two people at once?

For what Darley was seeking in Melissa (the dancer), he found in Justine. What Justine denied him, he found in Clea (the artist). At the end of the forth book Clea, Darley admits that he found what he wanted the most in love. For he knew that Clea would share everything with him unlike the other two.

The subtle nature of love that Durrell presents was considered divorced from the sphere of "moral" romance by critics of the past. But it is all the more relevant to the present age.

The form of The Alexandria Quartet

It is also significant to mention, when you are reading Durrell, you get the feeling that you are dealing with a genius - a protean artist. His temerity is evident in his experimentation. In The Alexandria Quartet, he tried to create new literature. Durrell let himself loose from the moorings of established conventions by experimenting with science. Not for science fiction though. The Alexandria Quartet would find it hard to figure in a particular category of fiction. It is crime-fiction, suspense novel, romance, thriller, tragedy, travel book all combined in one - a complete package.

Interestingly, Durrell tried to build his four-decker on "the relativity proposition". In the Preface to Balthazar, Durrell explained that he did not wish the reader to see the novels Balthazar and Mountolive as sequels to Justine but rather as "siblings" based on principles of relativity. To achieve what he had set out to do, Durrell deliberately didn't link the first three novels, instead he gave them a "spatial relation". However, the fourth novel is a sequel to the three novels and can be judged as a single work of fiction.

Durrell had to do a great deal of repetition, put many epigrams and observations in parentheses. He constantly relied on the "invented" books by the three writers who are confiding their gifts in the novels to the "mythical city" - Arnauti (Justine's ex-lover) the writer of Moeurs, Darley (the narrator: poet and school master) and Pursewarden ("the great, betraying and betrayed novelist"). The narrator quotes the two writers and other pivotal characters every now and then.

When I first experienced Justine, which Durrell had called the "modern investigation of love", his exploration of love and feelings in the book - (let me repeat again) in that exquisite language - was nothing less than a revelation. I must admit that Balthazar and his subsequent novels - which I read years after Justine - did disappoint me a bit because they altered my perception of Justine - a mysterious woman of "breathless, incisive beauty" and "mythical substance" with a "turbid voice" and a stupid side. It would be fatal not to say anything about the "heroine" of the novels. It is best to leave it to Durrell to describe Justine: "The cult of pleasure, small virtues, concern for the good opinion of her inferiors, arrogance… In many things she thought like a man, while in her actions she enjoyed some of the free verticals independent of the masculine outlook… Could mind-read in an unerring fashion."

Have you heard of the female Pope?

But it is not The Alexandria Quartet alone that we must remember Durrell for. His travel book Bitter Lemons where he has captured the mood and atmosphere of Cyprus during the period of 1953-1956 is a far better example of the writer's prose-gift. And one has to only turn to Durrell's translation of a Greek literature classic - Pope Joan: A Romantic Biography by Emmanuel Royidis - to confirm the writer's literary gifts.

This scandalous legend is a witty account about the life Pope John VIII (the first female Pope in the history of Christianity - a fact which many have questioned) who ruled Christendom from the seat of the supreme pontiff for two years, five months and four days after disguising herself as a man. The book is hilarious.

The Alexandria Quartet, the more serious work, is set before and after World War II. To sum up the novels in a few words, one can turn to Balthazar in which Durrell writes: "The politics of love, the intrigues of desire, good and evil, virtue and caprice love and murder, moved obscurely in the dark corners of Alexandria's streets and squares..."

That is exactly what Durrell had set out to do. Quite remarkably, he managed to maintain an impressive unity of tone throughout the novels and thus achieved a considerable reputation.

Also read: My reasons for not reading Lawrence Durrell’s The Alexandria Quartet

#The Alexandria Quartet, #Lawrence Durrell
The views and opinions expressed in this article are those of the authors and do not necessarily reflect the official policy or position of DailyO.in or the India Today Group. The writers are solely responsible for any claims arising out of the contents of this article.